Skip to main content
Photo by IRRI images at flickr.com 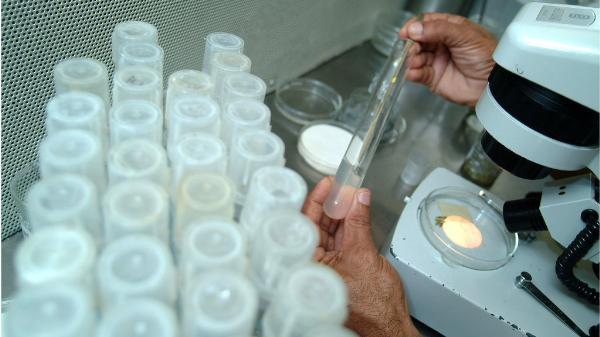 Last week, neurobiologist Colin Blakemore declared that in ethical debate about genetic science ‘legitimate concerns about risk must not be hijacked by those who set religious convention above the value of science’.  James Hanvey SJ is more worried by the assumption that ethical decisions should be framed according to rules determined by secular scientists.

Craig Venter, President of the J Craig Venter Institute, recently announced that he and his team wished to patent the method they use to create a ‘synthetic organism’. The J Craig Venter Institute's US patent application claims exclusive ownership of a set of essential genes and a synthetic “free-living organism that can grow and replicate” made using those genes.  The possibility of creating a new life form is due to work that has been going on for many years in deciphering the ‘genomes’, or genetic codes and structures, of humans and living organisms of less complexity.  The patent application therefore caused considerable anger in the science community as well as dismay among politicians and environmentalists.

We are very much aware of the dangers of atomic energy and increasingly aware of the dangers inherent in our interference in environmental processes directly or indirectly through our consumption and technology. Yet, one of the most exciting developments in science, and one of the most problematic, has barely been noticed except when headline-grabbing issues like the creation of a chimera (a hybrid cell or embryo) catch public attention. The point about ‘synthetic life’ is that it aims to create organisms that can do things no natural organisms can. It is the holy grail of genetic engineering to create sophisticated organisms that can continuously improve so that the boundaries of life and of machines overlap to yield truly programmable organisms.  At a deeper level, humanity has finally achieved mastery over nature, not by subduing it but by redesigning it so that we determine its end.

Such advances in science are generally accompanied by two arguments: one relies on the unquestioned assumption that to know is good (and the corollary that ignorance is bad).  Hence knowledge is an end in itself irrespective of how it is obtained or how it may be used. The second is utopian: science is essentially benign and it is always governed by a search for the human good. We are asked to believe that science can ultimately bring us some sort of salvation by improving our life and our world. Ultimately, that it can even improve us by overcoming those perceived defects that a blind nature has written into our code. So, we can design new humans by engineering out disease or ageing, improving IQ, and even changing those genes we believe cause problematic behaviour. Every single plea for public support for scientific research in this area resolves itself into one or both of these general arguments.

The Human Embryology and Fertilization Bill is currently making its way through Parliament. It is a complex bill with many consequences beyond licensing certain areas of scientific research. Many MPs have serious and substantial reservations.  That many have religious ground for their disquiet should not weaken their case or make their objections easy to dismiss. Often religion provides an important alternative perspective, one that is richer than the concerns of any particular group. Moreover, religious insight is quite capable of translating itself into reason, although the assumptions of the secularist mind may prevent it from hearing this. That many of these MPs are asking for a free vote is a sign of the maturity of Parliament and one of the best signs of a healthy parliamentary democracy. Given the seriousness of the issues, the request should be supported because it opens up the possibility of a genuine debate from which all benefit.

The majority of scientists recognize the danger of misuse and exploitation in the field of genetic science, as in other fields of biological and scientific research. There certainly needs to be an ethical framework to protect the integrity and the use of the work that is being done. However, Colin Blakemore, while calling for such a framework, goes on to say, “We need to debate this issue based on rational argument, rather than the kind of anti-scientific attitudes that we see emerging in Parliament around the new Human Embryology and Fertilisation Bill, and pushed by the Catholic Church. Legitimate concerns about risk must not be hijacked by those who set religious convention above the value of science” (Observer, 27/1/08).

It is no surprise that Blakemore, a member of the British Humanist Association, should wish to disenfranchise people of religious faith from this critical debate.  But this desire has no justification in fact; it is a combination of ignorance and prejudice. There is an assumption that religion is somehow opposed to any advance in human knowledge and also against scientific progress.  Neither view is sustainable. But most worrying of all is the assumption that ethical decisions are to be framed according to the rules that secular scientists themselves determine. Here we have another deep prejudice: that science and its method can ultimately answer all our questions, in whatever sphere. This universalism, with its inherent elitism, is problematic.

Ethics concern us all. Here, the great religious traditions, especially Catholicism, have a formidable tradition of rational discourse and expertise. Yet, in the Catholic tradition there is a realism which the high-priests of science choose to overlook or devalue.  Part of that realism concerns not only the necessary limitation on our ability to know – especially to grasp vast and complex realities – but also to use such knowledge well and at the service of humanity rather than against it.  Science has not shown itself to be particularly good at regulating itself or at ensuring that its creations are used for good ends rather than evil ones.  Scientific expertise does not confer a moral virtue or ethical wisdom; these have to be acquired from other sources.  The use and abuse of science and its goods is one of the most urgent issues of our society. It is not well addressed when scientists expand their professional authority beyond the bounds of their competence or when they allow their own intellectual and cultural prejudices to exclude other voices, insights and perspectives which are critical in this field.

That human beings are an end rather than a means is a view that secular humanists and religious people share. Problems arise not so much around questions of faith in God as from an inadequate understanding of the human.  If we do not have a sufficiently rich vision of what it is to be human and, indeed, of the value and purpose of human life, then why should we not use humans as an end?  Of necessity, science can only have a limited amount to offer in answer. It is difficult to see how, of itself, without engaging with questions of values, it could grasp the human being in anything other than a purely materialist and reductive way.  Such a limitation easily leads to experimentation and redesigning because the human person is just one more structure, just another organism.  If this is so, then what sort of Utopia does it lead to? Who determines what design is best and what ‘model’ should be promoted?  Science, because so much of its methodology presumes that the ends always justify the means, becomes a dangerous partner in the human project if it forgets that it is part of a wider community which must be attended to.

To conclude that the greater good of freedom and knowledge might lie in self-limitation rather than unlimited exercise and expansion, requires a wisdom which questions the axioms of an unreflective science.  Yet, that the deepest freedom and knowledge might lie in self-restriction and abnegation is something that Christianity, together with many other major religious traditions, understands. It is another approach to enlightenment. Society needs to have access to all the wells of wisdom if it is to make good choices. Surely no scientist who does not forget what it is to be human should be afraid to let other voices speak?

James Hanvey is Director of the Heythrop Institute for Religion, Ethics and Public Life.  This article was originally published in the Rapid Response series on the Institute’s web site.

The Heythrop Institute for Religion, Ethics and Public Life

Intensive Care: Because you’re worth it?

Assisting the suicidal and caring for the dying