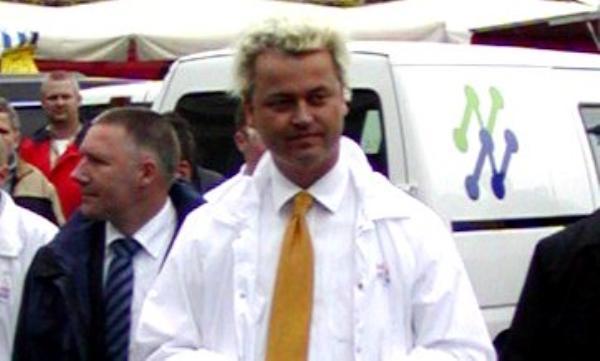 Recent events in the Netherlands have highlighted the presence there of some of Europe's most stridently Islamophobic public figures – writers, filmmakers and politicians. Michael Kirwan uses the insights of French philosopher René Girard to analyse what it is about the Dutch psyche that might lie behind such vociferous opposition to Islam.

The Dutch populist politician Geert Wilders has declared his intention to release an incendiary film about the Koran, a book which he compares to Hitler’s Mein Kampf. Wilders, who has already been living under police protection for several years, is deliberately positioning himself as a potential martyr, ready to share the violent fate of Pym Fortuyn (the victim of an animal rights activist in July 2002) and Theo van Gogh (murdered in November 2004, by a young man of dual Dutch and Moroccan nationality). Van Gogh’s provocation had been to make a short film, called Submission, with Ayaan Hirsi Ali, a Somali-born politician.  Hirsi Ali’s public rejection of Islam had similarly required police protection in Holland and in the United States. The ‘cause’ for which these individuals are prepared to risk their lives is that of free expression; indeed, so highly is this prized, that in an interview which appeared in the Observer (17 February 2008) Wilders expresses apparent indifference to the damage and violence his actions may provoke: “People ask why don't you moderate your voice and not make this movie. If I do that and not say what I think, then the extremists who threaten me would win.”

The hostile stance taken by Wilders illustrates the peculiar social-psychological phenomenon which René Girard has named ‘mimetic doubling’. Girard is a prominent if controversial theorist on violence: his notion of ‘mimetic doubling’ merely points to the fairly well-known paradox that the more antagonists try to stress the differences between them, the more alike they tend to become. The mutual fascination of rivals leads to an unconscious ‘copying’ (mimesis) of each other: they become mirrors. Wilders’ attitude towards Islam corresponds to that of the ‘radicalised Muslim’: a dualist, ‘us versus them’ world-view, a claim to threatened victim status which serves as a rallying call to a larger implacable struggle, the vituperation of the other (with ‘Nazi’ or ‘fascist’ being the epithet of choice). There is even a hint of the classic terrorist distancing from responsibility for one’s actions, the hijacker who says “we have no choice but to commit this terrible atrocity; the enemy has driven us to do this, they must bear full responsibility”. Wilders is aware of, but disingenuously disclaims responsibility for, the likely violent retribution for his film: “They say that if there’s bloodshed it would be the responsibility of this strange politician. It’s almost a self-fulfilling prophecy. They're creating an atmosphere. I'm not responsible for using democratic means and acting within the law. I don't want Dutch people or Dutch interests to be hurt.”  Like the suicide bomber, his readiness for sacrifice goes beyond his own willingness to die for the cause.

This cause is not secularism, however. Wilders, described in the Observer interview as ‘a lanky Roman Catholic right-winger’, insists that the European Judaeo-Christian tradition should be formally recognised as the dominant culture in Holland. By contrast, Islam is a ‘retarded culture’ with reprehensible views on women and homosexuals (sic), a judgement which many secularist critics of Christianity would laugh at. René Girard speaks of ‘violence as a subtle destroyer of the differential meaning it seems to inflate’[i], which simply means, once again, that the more antagonists aggressively assert their differences, the more similar they become. Violence is a relationship which entwines enemies closer together.

While Girard’s is a general theory of social dysfunction, there are specific aspects of the Netherlands experience which have made this country a fascinating if bleak, laboratory of  ‘difference gone wrong’. It is now accepted thinking to recognise the roots of the Dutch crisis in the sudden collapse of the ‘pillarized’ society in the 1960s, by which Holland comprised a number of tightly-integrated communities (pillars), principally Protestantism, Catholicism, socialism and liberalism, with minimum interaction. A much-prized history of tolerance was in truth part of a broader system of non-interference.  The collapse of these pillars saw Holland move very quickly from being a highly religious to a highly secular society, with the permissive revolutions of the 60s becoming in many ways a new dominant ideology. One commentator, Peter van der Meer, sees the emphasis on enjoyment, and the removal of obstacles to enjoyment, as key: ‘For the Dutch, Muslims stand for theft of enjoyment. Their strict sexual morals remind the Dutch too much of what they have left behind’[ii], with strict Muslim dress codes, for example, being seen as a direct challenge to the public performance of sexual identity.

This cultural crisis is paralleled by a political one: a widespread disillusionment with the leftist, highly consensual ‘coffee table’ political system, which had prevailed for several decades, and which had made Parliament boring. An alternative was to be found in populist and flamboyant figures like Fortuyn and van Gogh, who caught the emotional mood against a technocratic and consensual style of politics which had become discredited. These men avowed their intention to make politics ‘interesting’ once more; they seem to have succeeded.

Boredom, therefore, and some degree of guilt, seem to be key ingredients. While the deaths of Fortuyn and van Gogh have clearly been significant moments of trauma and self-examination for the Dutch nation, it should also be noted that the catastrophic event of Srebenica in 1995 is another sad marker. Recall that seven thousand Muslim men were massacred, while the Dutch U.N. battalion which was meant to protect them stood by. The open distaste of the Dutch peacekeepers towards the Muslim population is something which was to haunt the nation, akin to the painful self-examination of World War II collaboration, and dealing a (terminal?) blow to Holland’s tolerant self-image.

If we contrast this history with France, where the perceived challenge is how to maintain a doctrine of laicité or formal secularity, we can see the problem. The Dutch do not have such a confident and long-standing framework to appeal to, and the consensus which was in place – a rather superficial permissive construction around ‘freedom from’ – has proved to be fragile (a Girardian conference held in Holland in June 2007 was entitled ‘Vulnerability and Tolerance’). In understanding the vehemence of individuals like Geert Wilders and those who support him, it will not do to argue that the intelligentsia, artists and media in Holland – more than in other Western countries – hate Muslims.  Rather, Islam seems to represent for them a specific return of the ‘repressed sacred’.  The response is all too recognisable, the intoxicating figure of the holy warrior who is also a martyr. That such an archetype should emerge is not surprising, from a people who perhaps know better than any other when their defences are low.

This is not in any way to underplay the huge challenges of Islam in modern Western societies, but when the Muslim faith is casually and vehemently identified with fundamentalist violence then something has gone very wrong. In a recent essay called Tragedy and Revolution[iii], Terry Eagleton pictures the archetypal tragic hero: ‘Oedipus, broken and blind’, standing before Colonus. The city of Athens must decide whether ‘to gather this unclean thing to its heart, or cast it out as so much garbage?’ In other words, it must decide whether or not to recognise the humanity of this broken king, thereby to accept the sacred healing which he can bring. “Tragedy is said to be about pity and fear, and pity and fear are a question of identity and alterity”. We may think we only pity what is close to us, and fear what is strange; but in fact the challenge is the opposite: to recognise, as great tragedy does, that:

nothing is more fearful and opaque than ourselves and those akin to us, and nothing more pitiable than a humanity deformed alarmingly out of recognition. Confronted with the parricidal Oedipus, the demented Lear, or the tortured Christ, we are asked to couple these classical responses to tragedy together and come to pity what we fear.[iv]

National surveys indicate that when the Dutch look in the collective mirror they are not happy with what they see. There is ambivalence about the culture of freedom since the 1960s, and the public presence of Islam painfully reminds the Dutch of what they have left behind, so recently and so suddenly. (One can surmise that a similar process is at work in the hysterical reaction to Archbishop Rowan Williams’ tentative comments about Sharia law, a belated sense of regret for the loss of an allegedly confident Anglican past). Eagleton insists that however much terrorism presents itself to us as totally alien, it is in fact ‘home grown’, a child of the French Revolution. As a self-conscious political stance, it is the very epitome of bourgeois liberty – ‘freedom in a void’. Despite this:

the West continues to prove incapable of tragedy. It cannot recognise its own visage in the raging fury at its gates. It is unable to decipher the symptoms of weakness and despair in that fury and therefore is capable only of fear rather than pity.[v]

Michael Kirwan SJ is Head of Theology at Heythrop College, University of London.  He is the author of Discovering Girard (Cowley, 2005).

iWitness: ‘Firm in the faith’