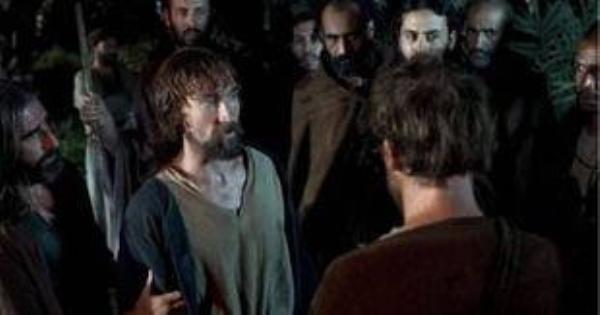 After seeing the third episode of BBC1’s The Passion, Gemma Simmonds CJ reflects on what is perhaps the greatest strength of this drama – the power to make us examine ourselves and our own reactions to Jesus and his message.

As a child I attended a convent primary school whose school week ended with the service of Benediction on a Friday.  A family friend sent his four year old son to the school, and at the end of the week, asked him what he had done that day.  “We did prayers”, came the answer.  On being asked what that was like, Patrick wrinkled his brow and said, “There was a man in a golden dressing gown”.  So much for the finer points of sacramental liturgy.

Rituals and solemn moments, however sacred to the faithful, have quite other meanings, or none at all, to those who witness them as uninitiated outsiders.  But for those whose initiation was so long ago that sacredness is in danger of being replaced by complacency or indifference it can be good to revisit the original scenes of the mysteries they celebrate through fresh eyes.  That is what BBC’s The Passion is doing, and it is not consoling viewing.  There are no sweeping apocalyptic dramas or strains of solemn music. There is only mess and muddle and rush and a mounting tension for a few amid the oblivion of the many.  As portrayed here the concrete events of Jesus’s final hours face each individual with a moment of truth, when masks are removed and deepest personal motives and reactions revealed in uncomfortable clarity.  No one, including the viewer, is spared.  We are no longer the viewers but the viewed.  It is as if the events of the Passion put the characters and, through them, us under a microscope, to see what our response to Jesus is made of.

Author Frank Deasy set out to imagine a world without a Jesus who carries the significance he now has.  We are left to make what we can of the bare bones of his words and actions.  Initially I found it hard to warm to Joseph Mawle’s portrayal of a man more Hamlet than Son of God, kindly, but rueful, almost apologetic and without any of the passion, conviction or charisma that might have lured his followers out of their homes and comfort zones into a precarious life on the road, chasing a dream.  As the series goes on, he appears no more convincing, indeed increasingly uncertain, but strangely enough his determination to go on, despite the mounting fear, criticism and doubt of his disciples, is the more touching for that.

His mother is not much help.  Deasy is reported to have based Penelope Wilton’s character on his own mother, and this is a mother seen through a young man’s eyes, angry with him for putting himself in danger, stubborn in her refusal to accept the necessity of it all, rough with him in her grief and desperation.  The disciples do little but whinge, James and John thundering away resentfully about what they have lost and left behind, counting the cost, finding it too high and longing for the safety of home.

The Last Supper, seen through their terrified and bewildered eyes, is bereft of grandiose meaning, leaving only questions.  There are brilliant, tiny touches in this production, moments of visual shock, of insight etched on the characters’ faces, then lost or deliberately rejected.  Philip (Tom Ellis)’s face as Thomas asks him what sense he makes of eating and drinking Jesus’s body and blood, Judas (Paul Nicholls), who leaves the Upper Room and vomits what he cannot swallow. Pilate (James Nesbitt) and Caiaphas (Ben Daniels) also have their moments of truth, their inner person unveiled.  Pilate is desperate to keep order, furiously determined not to let the Jewish leaders get the upper hand and above all to keep favour with the Emperor, who will decide whether or not he and his fragrant wife can get back to their villa in Rome.  It is the memory of that villa that defeats them both.  After her dream of Jesus, Claudia (Esther Hall) begs hysterically for Pilate not to harm him, but neither can bear to pay the price that saving him would cost them.

The richness of this production is in those momentary looks of realisation. Pilate looks at Jesus and knows there is more to this than he can see.  Claudia’s frenzy is quelled by Pilate’s pragmatism and her own realisation of the risk Jesus represents to what makes her life bearable.  Caiaphas’s whole face quivers with intensity and horror as he hears Jesus utter words that would destroy all that he has tried so desperately to save.  The male brawn of Simon of Cyrene and the female compassion of the legendary Veronica are morphed into one as Simon looks into the face of Jesus with an intimate intensity, challenging in that one look the calculations, resistances and avoidance of the others.

As in the third week of the Spiritual Exercises of St. Ignatius, we are invited to contemplate the Passion and find it instead contemplating us, measuring the true value of our words and gestures.  The crucifixion itself is oddly muted, set rather unsatisfactorily in the desert, so far removed from the city that it seems to be happening in a separate sphere of its own.  I doubt I will be alone in having my own momentary shock with a visual reminder, in the scene with the two thieves, of The Life of Brian.  Whether deliberate or not, it stands as an effective substitute for the mockery of the crucified Christ and the unintentional mockeries made of it by his followers down the centuries through their misuse of his revelation.

The conviction comes through the visual detail in this production. Deasy’s dialogue makes little headway in comparison. The removal of key words during the crucifixion or the addition of imagined others does little to improve the drama and at times threatens it with banality.  But the faces say it all, and the faces mirror our own.

Gemma Simmonds CJ lectures in Pastoral Theology and Spirituality at Heythrop College, University of London.  She is the translator into English of Henri de Lubac's Corpus Mysticum (SCM, 2006).

Watch this episode on BBC iPlayer (available until 28 March)

The Passion, Part Four: 'Does This Resurrection Work?'