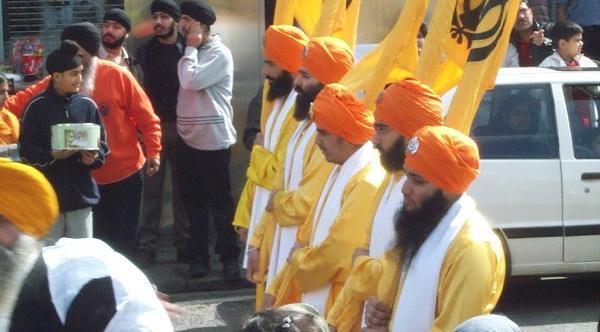 As Christians continue to celebrate the Easter season, Sikhs all over the world have been celebrating the festival of Vaisakhi.  Here Michael Barnes reflects on how such celebrations, with their rituals and their expressions of praise and wonder, can be a better starting-point for inter-faith dialogue than the discussion of 'theological propositions'.

Spring may be slow this year, but the cold and damp have not prevented Sikhs taking to the streets.  The mid-April feast of Vaisakhi commemorates the foundation of the Khalsa, the Sikh ‘community of the pure’ in the city of Anandpur in 1699.  Places like Southall, where I live in west London, quickly become choked with revellers as the holy book, the Guru Granth Sahib, is paraded through the town.  As the procession leaves the Gurdwara, the silence is rent with exploding fireworks and the shouting of the Panjabi word Waheguru – ‘wonderful God!’

It’s a word which punctuates Sikh prayer - a word of praise, an exclamation born of wonder and delight.  What I have always enjoyed about my engagement with Sikhs is this sense of deep devotion – bhakti, loving and loyal participation in God – which pervades the tradition.  Sikhi – ‘discipleship’, to give the tradition its proper designation – reminds me that there is more to the life of true holiness, and certainly more to the concept of God, than a formula of words, however venerable and exalted.  To utter that word ‘God’ is not to set out the terms of a metaphysical treatise which would serve as an explanation of things but to make an act of faith which stirs the heart and touches the soul.

Christians quite rightly look to the Creeds for a clear statement of the essential truths of Christian faith.  But it would be a travesty to treat these great records of Christian reflection on the mystery of God as if they are merely a list of propositions – just as it would be an impoverishment of Sikhism to treat the Mul Mantra, the ‘root formula’, the untranslatable summary of Sikh teaching which is placed at the head of the Guru Granth, as if it’s intended to be an exact definition of God.  Traditional statements of faith do not exhaust meaning.  On the contrary, they are intended to generate meaning, to nourish faith and enhance one’s vision of a world shot through with the traces of God’s presence.

It’s impossible, in other words, to understand our language about God – whether Christian or Sikh or whatever – if we sunder it from the context of the practice of faith.  There is a simplicity and directness to the language which Sikhs use to speak about God, a language which goes back to the experience of holy teachers or sants, especially the founder of Sikhism, Guru Nanak.  Yet simplicity does not mean naivete.  Nanak’s hymns combine what in the Indian religious tradition are known as saguna and nirguna bhakti – devotion to God ‘with qualities’ and God ‘without qualities’.

This reflects something of a distinction which is often found in Christian theology.  It is said that there are two ways of speaking about God, the ‘positive’ and the ‘negative’ – the way of image and metaphor and a more exacting way which proceeds by saying only what God is not – the infinite, incomprehensible, ineffable etc.  It is, however, easy to miss the point here.  The ‘negative way’ is often understood as reflecting the conviction that God is beyond grasping by human intelligence and therefore by human language.  Put like this, it implies the remoteness of the Ultimate.  That scarcely seems fair to the Christian mystical tradition where ‘darkness’ is very often the image used to describe not distance but a closeness which, in its overwhelming superabundance of light, is positively blinding.  And in the light of the Sikh gurus’ hymns of praise and delight, it also seems untrue to the way the saguna/nirguna distinction is understood by the Sikhs.  So called negative theology does not spring from a cool conviction that language is inadequate to describe the experience of God and must somehow be transcended; it arises from wonder at the sheer awesomeness of God – who has condescended to engage intimately with human beings.

At stake here, I feel, is the very nature of religious language – and the way faith is spoken about in the broader public arena.  Our contemporary culture has become so dominated by Enlightenment demands for the ‘pure foundations’ of knowledge that the intrinsically metaphorical nature of religious language has been subtly subverted.  The language of religion has been repackaged as an alternative explanatory theory, a sort of rival system to science, a more ‘spiritual’ version of what science tells us about the universe.  The word ‘God’ is invoked to describe the object of people’s concern, the aim of their searching and striving.  But it is easy to forget that without God’s prior initiative such a searching would be impossible.

For the Christian, God is the one named by Jesus as Abba, Father – a term which describes the intimacy of a trusting relationship.  God can only be spoken of in such relational terms – for God is not an object.  My point is that to dare to speak of God is not to produce some alternative – supposedly ‘religious’ – account of the way things are.  It is to open up the imagination to the wonder of creation – to enable us to find words which express our joy and delight as we contemplate the vivifying and transforming power of God at work all around us.

This is what the classical Creeds of Christianity seek to do.  They begin with the utter stillness of God the Creator, the source of all; they move into the historical narrative of God’s loving gift of himself through the revelation of God’s Word in Jesus Christ; they proclaim that life of hope which the Church seeks to share with the world under the guidance of the Spirit.  Those who profess this faith are, to put it crudely, given a ‘grip on things’, a handle on life.  But such a ‘summary of a summary’ should not distract from the form in which it is expressed.  When Christians say that ‘we believe in God, the Father, the Almighty’, what is being expressed is a commitment, an intention to trust in God, to rely utterly on God.  Similarly ‘we believe in Jesus Christ’; ‘we believe in the Holy Spirit’.  The grammatical form is curious – but important.  In its origins the Apostles’ Creed was probably a baptismal formula; it’s to be understood, therefore, as part of a liturgical confession, a declaration of intent – to live a life which moves towards God.

To illustrate the point, Nicholas Lash quotes Augustine: ‘What is it to believe in him?  It is in believing to love, in believing to delight, in believing to walk towards him, and be incorporated amongst the limbs or members of his body.’  (Believing Three Ways in One God, SCM; 1992; p20; quoting Commentary on John, xxix).  When I quoted this to some Sikhs at a recent meeting, they immediately became animated.  The second guru, Nanak’s chosen successor, was Angad – ‘limb’.  Nanak gave him the name to signify that he was to act as an extension of the guru’s influence.  Whether or not Augustine had in mind the continuation of some original revelation through the influence of human teachers, is beside the point.  In interreligious dialogue it is often the odd word, albeit used in different contexts, which opens up a new horizon of the imagination – which, in short, goes on generating meaning.

In this sense the Creeds which summarise the Christian doctrine of God do not just accompany prayer; they are prayer.  They generate that recognition of the traces of God which lead to acts of praise and thanksgiving for what God has done and goes on doing.  To put it another way, what the Creeds do is distil the meaning of the words of scripture which, as the living record of God’s Word, inspire in Christians a sensitivity to the great sweep of faith.

A few weeks ago Christians listened to the beginnings of that faith as the extraordinary truth about God is unfolded in John’s gospel.  Peter and John, having heard the extraordinary news from the women, run to the tomb.  Peter goes in first and sees the cloths with which they had wrapped the body of Jesus lying on the ground.  Then John goes in: ‘he saw and believed’.  We are not told what John believed.  In fact the evangelist makes the point that ‘as yet they did not know the scripture that he must rise from the dead’ (20:9).  It is enough that John puts his trust in God, that he continues – despite the mystery of what has happened – to keep faith.  Similarly throughout the Gospel we come across people who express their confidence in the person of Jesus.  In the story of the man born blind, for instance, Jesus works a miracle not as a response to faith but in order to provoke it.  ‘Do you believe in the Son of Man?’ asks Jesus.  ‘Who is he that I may believe in him?’  Jesus says that it is he.  The man replies ‘Lord, I believe’.  And the evangelist adds, ‘he worshipped him’ (9:35-36).

It is as if the power of God, which has been simmering unnoticed beneath the surface of the world, suddenly bursts forth.  The man sees for the first time.  The steadfastness and constancy of God – for that is what God is, the utterly reliable source of all, who gives energy and dynamism and meaning to existence – is somehow revealed in the person of Jesus.  The Gospel is full of ‘signs’, miracles and healings, but, properly speaking, there is only one sign – and that is Jesus himself.  People put their trust in him; they express their complete dependence on the one who proves himself dependable.

At this point of the Creed, Sikhism seems far away.  Nanak is not the Son of God, nor is the Guru Granth Sahib the Word Incarnate.  But the resonances which dialogue awakens in the heart of the attentive listener quite often bring a sense of God’s own presence to the only place where it really matters – to the relationship which faith itself establishes between the members of different traditions.  To come back to my opening remarks: speech about God is primarily a word of praise and thanksgiving which is inspired by the revelation of God’s Word.  To learn how to speak about God it is necessary to listen to what God says about God.   Which is why the Christian narrative is inescapably Trinitarian: God as the silent source from whom all things proceed, God as the Word who gives form and intelligibility to things, and God as the animating power or Spirit who draws all created reality together and inspires words of praise in human beings.

Michael Barnes SJ lectures in the Theology of Religions at Heythrop College, University of London, and is Director of the De Nobili Dialogue Centre in Southall, west London. He also teaches a course on Catholicism at the Muslim College in Ealing, and is author of Theology and the Dialogue of Religions (CUP, 2002).

Theology and the Dialogue of Religions by Michael Barnes SJ