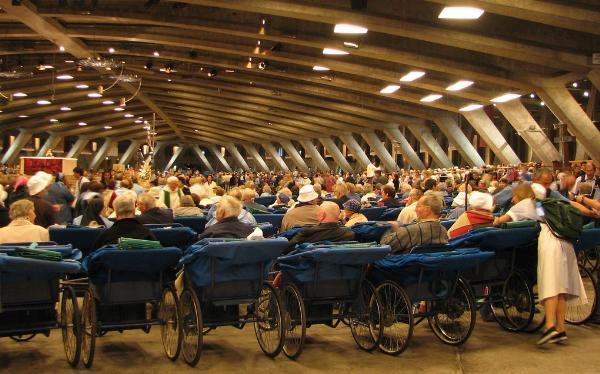 On the 150th anniversary of the final apparition of Our Lady to Bernadette Soubirous, Frances Murphy recounts her experience of Lourdes and describes the atmosphere that draws pilgrims back to the Grotto time and time again.

In the small town of Lourdes in south-west France, the direction of the one-way traffic system alternates each month.

The purpose of this is to ensure that, as far as possible, the vast number of souvenir shops that line the streets of the town benefit equally from the business of the millions of pilgrims who arrive in Lourdes each year via this traffic stream.  The implementation of this must be a logistical nightmare, and I am sure that it baffles motorists and pedestrians alike, but it seems to work.

A puzzling traffic system is not, of course, what Lourdes is renowned for.  It is a place of pilgrimage for Catholics the world over, as it is the site of a small grotto where the Virgin Mary appeared 18 times to a young girl named Bernadette Soubirous.  The Grotto where these apparitions took place is still the focal point for visitors to Lourdes, but first-time pilgrims will no doubt be amazed by the size of the ‘Domain’ that now surrounds it.  The beauty of the Basilica of the Immaculate Conception, which sits atop the Grotto (its altar is directly above the spot where the apparitions are said to have taken place) and the immensity of the Underground Basilica of St Pius X are truly things to behold.

This year sees the 150th anniversary of the apparitions to Saint Bernadette, which took place between 11th February and 16th July 1858.  The apparitions were declared genuine by Bishop Laurence, then Bishop of Tarbes, in 1862, after a full investigation into Bernadette’s claims.  It was not until the sixteenth apparition that the woman who had been appearing to Bernadette uttered the words: “I am the Immaculate Conception.” This title had been attributed to the Mary, the mother of Christ, only four years earlier by Pope Pius IX, and it is widely believed that it would not have been known to Bernadette prior to this occasion.

Even before the apparition had revealed her identity to Bernadette, the Grotto at Lourdes had attracted its first visitors.  Some eight thousand people were present when Bernadette had her fifteenth apparition, their journeys prompted by the rumours that a 14-year-old girl was having visions of a woman in white, who was speaking to her.  Many of these people will have arrived in Lourdes with curiosity, doubt and even fear playing on their minds.  Although we now know who this woman was, many people hold the same attitude about Lourdes today, even some of those who make the decision to visit.

This curiosity, and in many cases scepticism, about Lourdes no doubt arises because of the idea often bandied about in press coverage that it is a place where miracles happen, where the sick are cured, where the paralysed regain the ability to walk.  In fact, in the 150 year history of the Marian shrine, only 67 miracles have been officially recognised.  Given that approximately six million people visit Lourdes each year, this suggests that the chances of a miracle happening to any particular pilgrim are remote to say the very least.  Not that miracles obey the laws of chance and probability in any case, but the likelihood or improbability of a miracle should not govern anybody’s interest in or experience of Lourdes.  To place the miracles at the heart of the message of Lourdes would be a misconception.  Far be it for me to speak on behalf of all pilgrims, but in my experience most people do not travel to Lourdes expecting – or even hoping for – a miracle.

At the centre of the experience of Lourdes is not the miraculous, but a prayerful, hopeful and vibrant community, a community that changes minute by minute, a community nonetheless.  Many people are there on diocesan pilgrimages, others are on a more personal journey, but each person is searching for something different.  The pilgrimage has been an annual event in the lives of some pilgrims for decades, and many of them will tell you that Lourdes is the place where they feel most at home.  Those on their first pilgrimage will be unsure what to expect but, through participation in the nightly Torchlight Procession or the weekly International Mass in the Underground Basilica, they will find a sense of welcome and belonging.

The chapels and churches surrounding the Grotto all bear the title of “sanctuary”, according to the usage of the word that denotes a holy place, a place of pilgrimage.  Within the boundaries of the Domain, however, there seems to be a sanctuary in the more familiar sense, a place of safety and comfort.  People experience a security and are more willing to give of themselves; of their energy, of their time, of their thoughts.  Wheelchairs are pushed by young people who have volunteered to spend a physically demanding week at the service of elderly and disabled pilgrims.  Hospitals are staffed by medical professionals who give up a week of their holiday to care for those who would be unable to make the pilgrimage without their support.  And in the Masses and Reconciliation services that take place daily, as well as in solitary reflection, people find the space to discover and share something of themselves in prayer that they are often unable to find elsewhere.

In Lourdes, pilgrims are faced with challenges that do not present themselves in most people’s daily lives.  There are a great number of very sick people who make the pilgrimage, not in expectation of a miracle, but to pray and to place themselves at the mercy of God, who revealed himself through Our Lady in this place.  Through these malades, the reality of the suffering and pain that many people bear in their lives is present at every Mass, in every procession.  The courage and humility with which their suffering is borne asks questions of their fellow pilgrims; would I have the strength to cope with this burden?  Would my faith be strong enough to still place my trust in God’s mercy if I was faced with such an illness?  In the same way that meeting the malades invites pilgrims to ask these questions of themselves, their presence in Lourdes is a tangible symbol of hope in salvation through Christ, and is an encouragement to all other pilgrims.

It can often be difficult in Lourdes to engage fully with the meaning of the apparitions, as group pilgrimages have busy programmes and often leave little free time for those who are there to assist other pilgrims.  Even in the quieter moments, the Domain offers so much more than just the Grotto, and so in searching for the meaning of Lourdes there is more that one path to follow.  The motif of water – in the baths adjacent to the Grotto, in the water that springs from the taps and is bottled up for pilgrims to take home to their families, and in the river Gave de Pau that runs through the Domain – symbolises the cleansing, renewing experience that the pilgrimage is supposed to offer, as well as the healings that are said to come about through it.  The sanctuaries are places of prayer and worship, where the faith in God that allows people to believe in the apparitions is expressed.  Outside of the Domain, excursions to the mountain town of Gavarnie and to the Cathedral of the Trees in Cité St Pierre are opportunities to step away from the crowds of the Domain and experience a peacefulness that can be elusive in Lourdes itself.  And in the evenings, the bars and cafes of the town exude a festival-like atmosphere as people gather in the high spirits that Lourdes evokes, extending the friendships forged during the day.  Not one single message to take away then, but a multitude of gifts to be received.

The souvenir shops that line the streets leading to the Domain are filled with all manner of goods, covering the full spectrum from the sacred to the profane.  Rosary beads and icons are juxtaposed with fridge magnets, cigarette lighters and snowglobes bearing the image of the Virgin Mary.  Even the latter items on this list are designed to symbolise the focal point of Lourdes, Our Lady’s apparitions to Bernadette, but none of these “souvenirs” could convey the experience of a pilgrimage to Lourdes. Although many pilgrims may be unable to grasp the full meaning of the apparitions, everything in Lourdes, even the traffic system, somehow falls into place.