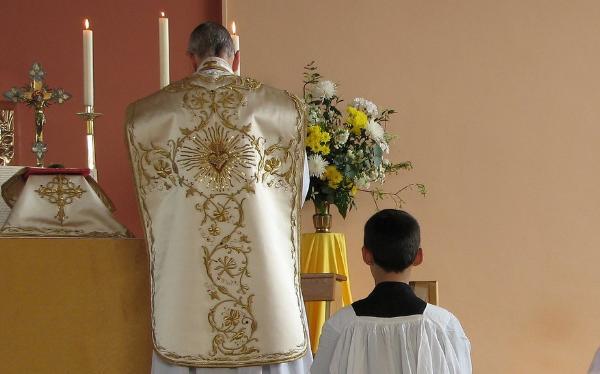 25th January 2009 marked the 50th anniversary of the announcement of the Second Vatican Council.  John Moffatt SJ looks at how we can understand the changes in the Church since the Council: do certain developments constitute a rupture with tradition, or should they be embraced as examples of growth in the life of the Church?

There is a fashionable thesis that certain developments in the church since Vatican II – especially liturgical ones – constitute a rupture with tradition.  The implication is that anything that smacks of radical disjunction rather than incremental change is in some sense an aberration.  The language of rupture is seized upon by those who want to ‘restore’ the tradition and return to a model of church life more recognisably continuous with that of the 1950s. There is of course a question about how far people’s memories of the 1950s are accurate, or how far they are imaginative re-creation.  However, more significant are the questions, (1) what are the conditions under which a development counts as a rupture, (2) whether a discontinuity is by its nature an aberration within the tradition and (3) how far targets identified as ruptures do actually deserve that label?

One condition for a development to be a rupture is that it is in some way discontinuous with what went before and in some understandable way non-trivial.  An obvious and oft-cited example is the move in the Western tradition from an East-facing liturgy in Latin to a liturgy in the local language in which the priest faces the people.   In the former, the gestures of the priest are mostly invisible to the congregation and participation (for those not serving or singing in the choir) consists in following a parallel translation in a book or silent prayer and meditation.  In the latter, the priest faces the people, his gestures are visible, the language is common and there is comparatively little space for silent, personal prayer.

Another possible example is the political change in the course of the 19th and 20th centuries.  The Church that since the days of Constantine has most often lived with monarchical government has learned despite the historical shocks of revolution to trust and promote democracy.  A third example is the reading of sacred text.  A hundred years ago Catholics officially believed that Genesis 1-3 represented a literal historical truth, written personally by Moses about the origin of the world and of humanity.  Now these chapters are accepted as the composite work of many hands, whose claims to a literal, historical truth fail but whose claims to theological truth continue.

Each of these examples represents a serious disjunction with what has gone before.  The first is a current favourite for comment though the last, with its still to be fully integrated consequences for theology is philosophically the most challenging.  All three have significant consequences for inherited beliefs and corresponding behaviours.  The liturgical change transforms the relationship of the non-clerical participants to the liturgy and of clerical participants to the congregation.  The political change transforms the way the representatives of the Church engage with political processes and evaluate economic and social change.  The hermeneutic change opens up possibilities for dialogue with the natural sciences that invite us to rethink the theology of creation and all that flows from it.

So perhaps we can see from these examples the hallmark of a ‘rupture’, a discontinuity with previous practice and belief which clearly contradicts, rather than builds on, what has gone before.   Such turn-arounds are clearly disruptive for those who rely on stability in belief and praxis.  It also appears pernicious in the light of the ancient test for orthodoxy: what has been held by all people, at all times and in all places.  Surely such radical disjunctions count as ruptures, are aberrations?

But is a radical discontinuity within the tradition of its nature an aberration?  It is noticeable that the language is applied primarily to development and change within the Roman tradition, reaching back to the fourth and fifth of the Christian centuries.  It goes together with a model of the linear development of Christian doctrine and practice that reaches its high point in the formulations of Trent, which only need to be reaffirmed in later text.  This view does not entirely do justice to pre-Nicene apologetics, which are mostly in Greek and which included the writings of such outstanding thinkers as Clement and Origen.  Nor does it sit easily with the development of liturgy between the 1st and 4th centuries, about whose steps we know remarkably little.  Beyond the near certainty that Christianity more or less consciously acculturated to a world in which mystery religions and their secret ceremonies were a big religious draw, all we can do is note that that the end product looks very different from the memorial of the Lord’s Supper as described in 1st century texts.

It is worth examining our metaphors more closely.  ‘Discontinuity’: the word hints at the mathematical picture of linear progression, in which all is continuous.  Surely we would not want to interrupt the beauty of the smooth curve, of incremental progress towards a clear, predictable goal?  Yet there are other functions, perfectly respectable and very important in nature, which are non-linear, discontinuous.  A small change in initial conditions produces a result which appears to jump from what has gone immediately before: the chaotic flow of water, a sudden storm.  Discontinuity does not have to be a bad thing in nature.  It can indeed be the condition of creativity and innovation.  Why should developments in the Church be bad because they appear discontinuous (provided only that they are indeed rooted in the initial conditions out of which the Church grew and grows)?

Let us look at the other metaphor of rupture.  We think of torn limbs, mangled bodies, maimed by a traumatic experience.  Supposing, though, we substituted the biblical metaphor of ‘pruning’ for the same sequence of events?  Here we see the organic growth of a tree.  Perhaps one branch has become too heavy – it threatens to break off completely or pull down the whole tree.  If pruned the tree can adjust to its changing environment, it can grow straight and endure.  The over-extended branch represented one of the possible lines of growth embedded in the tree’s DNA text and evoked through a particular environmental history.  But there are other possibilities, just as much a part of the DNA, the foundational text, which can be unlocked as the tree grows through new histories, and which need to be actualised if the tree is to flourish.

This is rather a roundabout way of suggesting that discontinuities are not in themselves bad, though they do need to be rooted in the deep text of the whole tradition.  So we find, for instance, that the earliest Christian texts contain a radical critique of earthly kings and authorities side by side with an acquiescence to a de facto authority that comes ultimately from God.  The ideals of koinonia and corporate responsibility of early community life are closer to the democratic ideal of Athens than to the monarchy of Imperial Rome.   Eventually, however, Christianity became the spiritual arm of that Empire: one God, one Emperor.   This clearly triggered a new direction of growth in liturgy and in structures within the Church.  But we can see in our time, that the disjunction of a new Christian political vision in an era when Empires have faded, though discontinuous with that long stretch of the past, has sound roots.

Close reading of New Testament texts, applying modern techniques of analysis, makes clear that in their compilation there is already a much more nuanced approach to ‘truth’ and ‘historical accuracy’ than is always assumed in subsequent readings.  Yet we also find in the patristic tradition no hesitation in modifying the harshness of literal readings with life-enhancing spiritual readings.  Origen – praised by Eusebius as an intellectual giant of Christianity – followed in the footsteps of Philo the Jew and had no qualms about blending exegesis and philosophy to produce out of sacred text a version of his faith that might be coherent and credible to the intellects of his era.

And then there is liturgy.  Yes indeed there is a radical discontinuity between an east-facing priest and a people-facing priest.  But can we imagine a passage from one to the other that is smoothly continuous?  And how could we find intrinsically disturbing a setting that invites us to enter the liturgy imaginatively as the disciples at the Last Supper, while text and actions preserve the layers of tradition and typology that have accrued through the centuries?  Why did the Roman Christians have to endure the disjunction of having their liturgy translated into Latin in the 4th Century, unless so that Romans with no Greek could participate fully alongside easterners in the community?

I affirm that I would have great difficulties living in a Church that required me to disown democracy or which refused to countenance the critique that the best of the modern intellectual tradition can bring to ancient texts with such fruitful results.  I could probably live with an east-facing liturgy if I had been brought up with it.  But as I am, I would deeply regret the loss, on the basis of an unexamined metaphor, of a liturgy which at its best is joyful and human and which invites us to find the face of the Lord in our brothers and sisters gathered around the altar.  These may be discontinuities, but I venture to suggest they do not qualify as aberrations.

I suggest that if we are to make positive sense of the changes in the Church over the last two hundred years and to be ready to operate faithfully and flexibly in a rapidly changing environment, we need a deeper sensitivity to the real variety within our history, a deep trust in the working of the Spirit and a reasonable hermeneutic of discontinuity.

John Moffatt SJ is Catholic Chaplain to the University of Oxford.  He is the author of Beyond the Catechism: Intellectual Exercises for Questioning Catholics (Lulu, 2006)

Beyond the Catechism: Intellectual Exercises for Questioning Catholics

Painted spaces: Art for a Covid-Advent. 2. ‘The Annunciation’ by Fra Angelico

Has Blair lost his faith in politics?

The History of Apologies Down Under