Skip to main content
Photo by jeffq at flickr.com 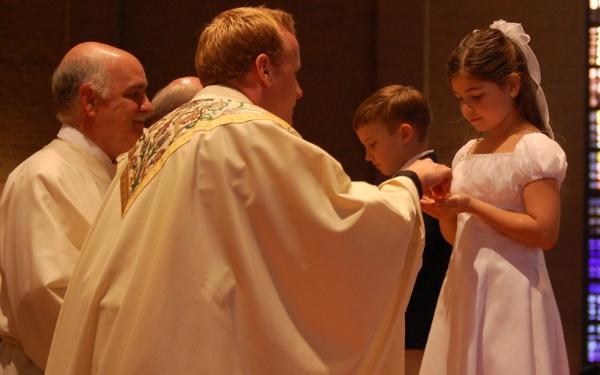 Catholic parishes will be celebrating the First Holy Communions of their young parishioners over the coming weeks, and preparations for the celebration will already be well underway.  Desmond Ryan reflects on why so much emphasis is placed on First Communion Day, not only for the child receiving the sacrament, but also for their family.

Some reflections on the English popular celebration of First Communion

In 1990 I interviewed some 80 priests about the life of their parishes in the Midlands of England.[1] Arising out of these interviews came an invitation in 2000 to talk with the first year students of the Beda College in Rome about sacraments, seen from a sociological point of view.  In what follows I want to share a reflection, a second thought, which was prompted by the discussion with the Beda students.

In my book, I had reported that the nearest thing to a consensus that emerged from the interviews with parish priests was that large numbers of parishioners took the sacraments of Baptism, First Communion and Marriage, and then were hardly to be seen again.  In general, priests saw themselves as ‘trapped: we are anxious not to refuse, but what they want is not what the Church wants for initiation into the Church community.’

Priests thought [the sacraments] were means for integrating the spiritual life of individuals into the wider Christian community, the Church as the body of Christ; whereas the majority saw them as occasions for the ritual acknowledgement by the social community, the family and friends of the candidates, that a milestone in individual and family life had been passed....[P]riests saw the popular perception of these sacraments as of an event.

‘Parents do turn out very well for the pre-first confession and first communion talks.  The actual event is all show, a glorious thing.  But they don't come near us afterwards. Even if made to sign a promise.’

As with any significant social event, dressing up was crucial.

‘First communion – they are in a Catholic school, the class is going to do it, they're going to be dressed up, 35 children gives you an absolutely packed church – but with what spiritual content I don't know.  I daren't do away with the dressing up.  There'd be a revolution, a schism!’ [2]

It is clear that baptism, marriage and funerals are classic rites de passages: most societies have some equivalent celebration at those particular social transitions.  But in the Beda seminar the question came up as to exactly what kind of milestone was being celebrated here, and for whom: was first communion really a rite de passage, perhaps a kind of displaced puberty ritual?  I have come to the view that it isn't, mainly because there isn't actually much emphasis on an identity transition undergone by the child.  Life afterwards is pretty much like life before, except that the majority stop going to church!  But if it isn't a rite de passage, why is 'First Communion Day' so extraordinarily important for people in less well-off Catholic communities in England?  It does seem odd for so much material and emotional investment to go into an event which is not claiming social recognition for a group achievement, publicly affirming the passing of a milestone.

After the discussion, I remembered a TV documentary broadcast not long before, covering the run-up to and celebration of First Communions in a parish in Liverpool.  This was classic stuff: the girls in dresses costing hundreds of pounds, the boys in white suits; new clothes for all the uncles, aunties, grandparents; specially ordered cakes for the celebratory meal, attendance at which was de rigeur; for the children, bouncy castles hired for the garden, balloons with 'First Communion' printed on them; and so forth.  Nothing was less than the best.  Yes, it was the child who was the candidate for the Christian sacrament – but the celebration involved the family as a whole.  Was there here a clue as to what this 'event' is all about?

Less well-off families have the same hopes and dreams as rich families; it is in the means to fulfil them that they differ.  The dream of every family for its members is that every need should be met, every wish fulfilled, that every individual be both appreciative of what they receive and appreciated for what they contribute.  Everybody should be able to feel: 'This is the best of all families to be in'.

The glorious show of First Communion Day makes a lot of sense as a collective enactment of just such a perfect family.  They are realising the dream.  But just for a day.

Thus the communicant child's clothes have to be the complete reverse of sensible and everyday wear.  Here good value would be bad value.  What could be in more complete opposition to the prudent calculation of everyday shopping than elaborate dresses and suits in fragile materials which will never be worn again?  The adults will be allowed to wear their suits and dresses again: but on the day itself they should appear to be being worn for the first time – whether new or freshly cleaned, these too must conform to the theme of  'born again'.  The sense of the new will be reinforced by the fact that mothers and aunts will probably have had their hair done the day before.  Compliments on each other's appearance will be general.  The food will be excellent, appropriate to celebratory rather than everyday meals, and there will be too much of it.  The drink, too, will not run out.  As far as is politically possible, fractured families will heal for this day.  Everybody's best face is put on, and is responded to.  The family will stretch to the maximum of inclusiveness: godparents and Irish uncles will join old school-friends of the parents in discreetly handing over gifts for the child of the day.  The aura of holiness and purity of a child maximally close to God is brought into the family gathering as the child continues to wear the ritual garments from the sacred moment.  Most people present will cast a few thoughts back to their own glorious day, and will be identifying with the inner question the child can occasionally be seen to be asking: am I any different now that I have taken the body and blood of Christ?  Everybody knows the objective: perfection – perfection in appearance, perfection in behaviour, perfection in consumption; the sinless child in their perfect family.

For these few hours a few dozen ordinary people make extraordinary efforts to abide by the discipline of a ritual which appears to be materialistic and 'merely' social.  But we need to look more carefully.  In the earliest days of sociology, Emile Durkheim realised that the hidden object of many a religious ceremony was not the deity or spirit being addressed, but the community doing the addressing.  Our worship, too, is often not only of God, but of ourselves.  Ourselves as we strive to be, perfect members of the ideal community.

It is reasonable to suppose that the harder it is to make this kind of claim stick as a continuing truth, the more extreme will be the effort put into making it credible on the one-off occasion.   In the way of things, poorer people find things stacked against them when it comes to making statements about family success through their day-to-day lifestyle.  But this doesn't mean that they don't aspire to the same ideals as the better-off.  Therefore the occasion for making the statement moves from the everyday to the special day: from lifestyle to ‘event’.  If this is the case, English popular Catholicism has evolved a powerful and symbolically coherent social liturgy in which the people come together to celebrate their own ideal of themselves as a perfect family, loyal to the Church of their ancestors, ever hopeful of standing as well with God as the child whose sanctification they celebrate and share in.  They are making a claim for social recognition of group achievement.  From this liturgy what we read is: ‘See - this is what we are really like’.  The sacrament for the child is thus extended into a sacrament of the family.

So maybe we should acknowledge the sociological intuition in the tolerance of schism-fearing priests for the glorious shows of their Eucharistic occasionals.  Maybe the very fact that First Communion does not involve a transition in social status provides space for the family to celebrate its continuity.  Not the infant arrivals and adult departures of baptism, marriage and funerals, but the shared life of parents and children, family and friends.  As projected by Vatican II, the Eucharistic community over which the priest presides is an ideal community always in hope of becoming actual.  The glorious shows of English Catholic first communions project an actual community's hopes of becoming ideal.  Be those hopes realised how they may, the ideal aspired after seems to me very beautiful: a team of truths about wholeness, holiness, loyalty, and love.

Desmond Ryan is Honorary Fellow in the School of Health in Social Science, University of Edinburgh, and Colaborador Externo, Departament de Treball Social i Serveis Socials, Universitat de València.  His current research is a comparison of self-confidence in 12-14 year-olds in Scotland and Spain.

An earlier version of this paper was published in: The Beda Review, Rome: Pontificio Collegio Beda (2000) pp.60-62

[1]A great part of this material appeared in a book: Ryan, D., The Catholic Parish: institutional discipline, tribal identity and religious development in the English Church,(London: Sheed and Ward, 1996)

The Catholic Parish by Desmond Ryan