Skip to main content
Gilo checkpoint in the early hours of Christmas Day, 2008 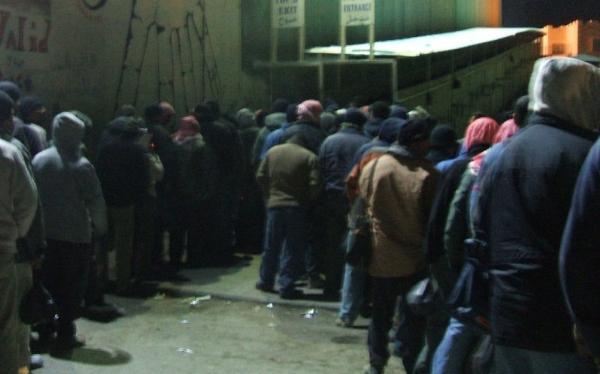 As we make the final preparations for Christmas, there are many Christians in troubled areas of the world who will be unable to welcome Christ into their lives with the same freedom that we enjoy.  Hilary Browne describes what Christmas is like now in the place of Christ’s birth, where last year news of violence marred the celebrations in already difficult circumstances.

This time last year I had two Christmases. The first, Western Christmas, was spent in the tiny village of Yanoun on the outskirts of Nablus in the West Bank. I was one of a team of four Ecumenical Accompaniers (EAs) based in the village. I stayed in the village over Christmas as I had chosen to go to Bethlehem for the Eastern Christmas in the New Year. Staying in Yanoun was a positive choice. We had it all – sheep and goats in the barn next door, a donkey in the field, and the night sky full of stars. Here, strangers in need today would be taken in by the warm, generous villagers.

The second, Eastern Christmas, was spent living and working with the EA team in Bethlehem. Israel attacked Gaza on 26 December so all celebrations, other than religious services, were cancelled. My journey to Bethlehem was not easy. Security was very tight throughout the West Bank with Israeli soldiers pointing guns at the windscreens of Palestinian vehicles approaching the many additional checkpoints and roadblocks.

On arrival, I joined our Bethlehem Team for the three hour Christmas Eve service at the Church of the Nativity. From my position in the Church I had the Greek Orthodox service taking place to my right, and both the Syrian Orthodox and the Coptic services taking place to my left – all at the same time. It would have been an exhilarating experience had it not been for the overwhelming air of sadness and grief in response to the events taking place in Gaza.

The next morning, Christmas Day, we walked to Gilo checkpoint at 4.00am in the morning. Already, at that hour and in the dark, two long lines of men were standing in freezing temperatures waiting for the checkpoint to open to allow them through the Wall to work in Jerusalem. We joined the line to accompany the men.

The checkpoint opened at 5.00am and we all moved slowly through the first of three narrow turnstiles, queuing between each. Slowly the two lines merged and we were funnelled through the metal detector. Then another long wait as we approached the final hurdle for the Palestinians: the biometric scanning of fingerprints against those registered on each man’s work permit. As we waited I was shocked to see armed security men and armed Israeli soldiers patrolling walkways on metal gantries above us.

In contrast there, on the other side of the barrier, was a group of Israeli women belonging to the women’s peace organisation Machsom Watch. Their witness, as Israelis, is to be at the checkpoint offering help to anyone in difficulty. This could be negotiating with soldiers or writing letters for Palestinians in Hebrew to official bodies or government organisations. At one of the turnstiles I noticed a young Israeli soldier, on duty, reading a book with his back to the line of men passing through. Was this his protest, I wondered?

It took two hours to clear the checkpoint that Christmas morning. As we emerged though the Wall into Jerusalem there was an official sign, the ultimate irony, saying, ‘Have a safe and pleasant stay! Happy Christmas!’

In Yanoun, on the first Christmas Eve, we women EAs sat with three village women around their simple brazier, stoking it gently from time to time with olive wood, drinking sage tea and coffee in peace and companionship. Not much was said but so much was shared. For me it was a Quaker Meeting for Worship. The lights from the settlement opposite flooded the room as an ever-present reminder of the Occupation. But there too, in spirit, were our Israeli friends. It was an unforgettable experience – friendship across faiths growing from a shared commitment to peace.


Hilary Browne is a member of The Religious Society of Friends (Quakers). From November 2008 to February 2009 to she was a member of the World Council of Churches Ecumenical Accompaniment Programme in Palestine and Israel (EAPPI) She was based in Yanoun, near Nablus, in the West Bank.

This article was originally written for the Quaker weekly, The Friend.

Benedict’s visit to a land called to be holy: Part one

Horizons beyond walls: Pope Francis in the Holy Land