Skip to main content
Christ of the Breadlines by Fritz Eichenberg 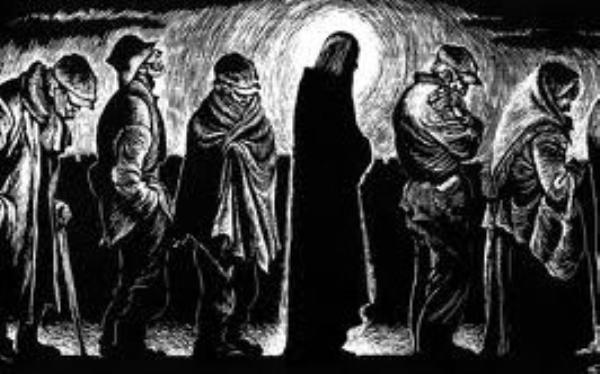 When Danny Daly decided that he wanted to become more active in his faith, London Jesuit Volunteers provided him with the opportunity to get involved with homelessness projects in and around London.  As we mark Homelessness Sunday on 31January, Danny describes the life-changing journey that his work with the homeless has led him on.

When I returned to the Church in late 2006, having been ‘resting’ for a number of years, I was determined to be not only more active in learning about my faith, but also to heed James’s words that ‘Faith by itself, if it has no works, is dead’ (James 2: 17).

I decided to look to the volunteering sector for opportunities to carry out my ‘good works’. By profession I am a Finance Director for a publishing company, and so I believed that my initial volunteering efforts should focus on my finance skills.  I joined Emmaus South Lambeth as a Trustee in early 2007. Emmaus was founded by Abbé Pierre (a Catholic priest and MP) in Paris sixty years ago, and has had a UK presence since 1992. I was attracted by the Emmaus UK ethos – ‘Giving people a bed, and a reason to get out of it’ – and how it enabled people to escape from homelessness, providing work and a home, in a supportive, community environment. Companions (as residents are known) work full-time collecting, renovating and re-selling furniture donated by the public. This work supports the Community financially and enables residents to develop skills, rebuild their self-respect and help others in greater need. The Companions receive accommodation, food, clothing and a small weekly allowance, but for many the greatest benefit of all is a fresh start. Emmaus South Lambeth opened its doors as a Community in October 2007, and whilst there have been a number of challenges along the way, it has grown and developed as a Community since its opening. In addition to my financial role, I decided that it would also be useful to work as a hands-on volunteer once a month, helping in the shops or the warehouse as required. This allows me to better understand the nature of the business, and reinforces the Emmaus ethos of a family working together.

I also became involved with the Mount Street Jesuit Centre in 2008, and in September of that year there was a meeting for those interested in becoming part of the London Jesuit Volunteer (LJV) community, a project that has been running out of the Centre since January 2007.  I relished the opportunity to combine my volunteering with the support of monthly Ignatian spiritual reflection, particularly as my initial decision to volunteer came out of a desire to strengthen my faith. The introductory meeting confirmed that this was exactly what I wanted to be doing, and later that month I met up with the LJV Co-ordinator, Andrea Kelly, to get some ideas about an additional volunteer placement that would be suitable for me. We narrowed it down to two: the Jesuit Refugee Service (JRS), and the Urban Table soup kitchen run by the London Catholic Worker. The logistics meant that Urban Table was the most suitable option for me. Before beginning my volunteer placement, I met with Martin Newell, a Passionist priest at Dorothy Day House in Hackney, which, along with the Catholic Worker Farm in Hertfordshire, is one of the houses of hospitality of the London Catholic Worker. Martin and myself are of a similar age, and over a couple of cups of coffee we had a wide-ranging chat about the Church, politics, football, and the Essex in which we both grew up. I knew within a very short period of time that this was somebody I wanted to work alongside. In a quiet, modest way he set out what the aims of the Catholic Worker are, and how living the Gospel is at the heart of what they believe and do. This stood in sharp contrast to the loud, empty rhetoric I have often heard in various political meetings that profess to want to help the poor and marginalised.

Urban Table is based at the Round Chapel in Hackney. On Sunday afternoons soup and sandwiches are prepared by the volunteers and fruit, cake and hot drinks are also provided to the guests. Many of the guests are originally from the recent EU accession countries, but there are also a number who are local to Hackney. Some sleep rough, others live in squats; others still are simply isolated and struggling to cope. At the end of the afternoon, the volunteers meet up to discuss how the day went, followed by a period of readings, reflection and prayer. There is an iconic Catholic Worker image that is set up in front of us, with two small candles: ‘Christ of the Breadlines’ by Fritz Eichenberg. It depicts down-and-out men and women in line, huddling in their ill-fitting clothes for warmth. In the centre, in silhouette, stands Christ, radiating light and warmth in the darkness. It is such a stark and powerful image and never fails to resonate with me personally. It expresses visually Christ’s words ‘I was hungry…I was thirsty….I was homeless….I was naked…..I was a stranger….I was a prisoner’. Occasionally, at the end of the discussion a volunteer will apologise for spending too much time at the tables with the guests, and not helping out in the kitchen. This is an unnecessary apology, as sharing a meal, sitting and chatting with the guests is at the heart of what the Catholic Worker offers. When I look back over my first year with Urban Table, I am aware that on the Martha and Mary spectrum, I have veered too much towards the Martha end. Too often it’s easy to retreat into your comfort zone, and find yourself simply serving the food, washing and drying up. Urban Table values the Mary approach equally, the act of sitting and listening to the guests, and it is something I aim to do more of in the future.

By the summer of 2009, Andrea was suggesting that I become involved as the LJV representative at Housing Justice events. Housing Justice is the national voice of Christian action in the field of housing and homelessness. They work for change in housing policies at local and national level, by embracing partnership with people of all faiths (and none) who share their values of social justice and compassion. Housing Justice has been chosen by the British Institute of Human Rights (BIHR) to be one of six London-based organisations to receive training and support in the area of human rights. The aim of the project is to help these organisations call upon human rights to strengthen their voice and their influence with national and local policy makers. I participated in two days of training in relation to this, and now form part of a working group called the Homeless Human Rights Action Team. The group’s first priority will be to tackle practices such as police waking up rough sleepers in the night and street cleaners hosing down their sleeping areas. Apart from all the other excellent work Housing Justice does, it acts as a good network forum, allowing members to discuss with and learn from each other. At a Housing Justice event I became interested in the work of Nightwatch: they provide a soup run that goes out 365 days a year in Croydon, as well as other supporting initiatives for the homeless. I decided to volunteer for them on a Friday night on a fortnightly basis and this has provided a good link, as Croydon Nightwatch recognised that Emmaus South Lambeth offered an accommodation referral opportunity for some of their clients.

So looking back at the last three years, what have I learned?

Firstly, my eyes have been opened by the stories of the homeless people themselves, and the strength of character that so many have shown when it comes to overcoming addictions, a broken family life or childhood abuse. It has made me even more aware of how fortunate my supportive family circumstances have been in my life. As a life-long sport lover I was delighted when London won the Olympics bid, but as we move towards the 2012 Games there is a real fear amongst street homeless that there will be inhumane efforts to sweep them up off the streets. (Alison Gelder of Housing Justice describes the extent of this problem in an accompanying article for Thinking Faith.) This is just one of many issues affecting the homeless that I may not have been aware of before, but thanks to the time spent working with and talking to those who are faced directly with such a problem I am now able to understand, at least partly, the issue and am in a position to help.  Secondly, I have been struck again and again by the dedication and hard work I have seen, both from the paid staff and volunteers working with the homeless. It acts as a good catalyst, because each volunteer is encouraged to play their part and not let fellow volunteers down.

At our Induction Gathering in Advent 2008, new LJV members were given a Handbook. Apart from offering guidance as to what the LJV commitment would involve, it also offered an excellent reading list and extracts from inspirational writings and commentaries. The following extract from Pedro Arrupe sums up how volunteering within the homelessness sector has enriched my life, and offers excellent advice to anybody considering volunteering:

Nothing is more practical than finding God, that is, falling in love in a quite absolute, final way. What you are in love with, what seizes your imagination, will affect everything. It will decide what will get you out of bed in the morning, what you will do with your evenings, how you will spend your weekends, what you read, who you know, what breaks your heart, and what amazes you with joy and gratitude. Fall in love. Stay in love. And it will decide everything.

Sometimes, in conversation with friends and colleagues, they have praised my involvement, and I have often mumbled something along the lines of getting more out than I put in. I then came across a much better answer written by Dorothy Day in 1945:

For a total Christian, the goad of duty is not needed – always prodding one to perform this or that good deed. It is not a duty to help Christ, it is a privilege.

I see my involvement to date as just the setting out on the journey to helping Christ and I am looking forward to continuing along this road, with all its challenges, over the years ahead.

Danny Daly is a member of the London Jesuit Volunteer community.

Good Work in Hard Times: Volunteering and ‘The Crunch’