Skip to main content
Photo by TJuk1980 at flickr.com 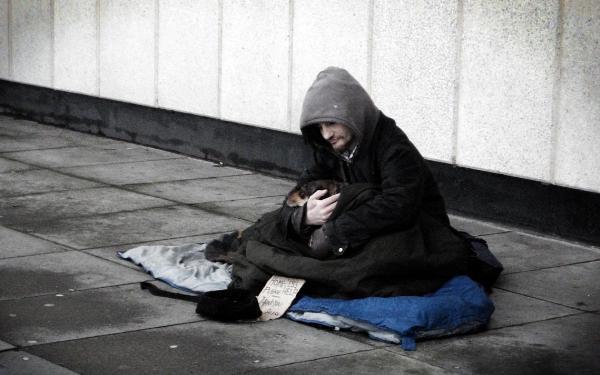 The countdown to the London Olympics has now begun in earnest, but the excitement that the Games bring is only one side of the story. With the global spotlight making its way to the capital, 2012 is now a target date to end street homelessness, but how realistic a goal is this? Alison Gelder looks at past, present and future attempts to address rough sleeping, and asks us to think beyond practical action so that the 2012 target can be achieved.

We all know that 2012 is when the Olympic Games come to London. The Olympics promise to bring increased access to sport for all, regeneration for neglected boroughs in the East End of London, and a legacy of sporting venues and affordable housing. However, the Games do not bring with them only benefits. More Than Gold, a Christian organisation which coordinates church responses to major sporting events, has noted that there is usually an increase in prostitution and trafficking associated with events like the Olympics and the football World Cup, and that street homeless people and beggars are often swept from the streets in an attempt to insulate visitors from the realities of life in the cities and countries where the events take place.

In London, 2012 has been seized upon as the date by which street homelessness will be ended. This started with a campaign by Homeless Link, a national umbrella organisation for frontline homelessness agencies, to end rough sleeping in England by 2012. Then on 18 November 2008, the Government launched No One Left Out: Communities ending rough sleeping, a 15-point action plan developed with the help leading rough sleeping charities and the intention of ending rough sleeping for good.  This was followed by a pledge from the Mayor of London, Boris Johnson, to end rough sleeping in London. This is significant as London is not only the primary location for the Olympics, but it also accounts for more than half of the national rough sleeping population. The idea behind the campaign, action plan and pledge is a good one: that we will avoid having to sweep rough sleepers off the streets for the Olympics because we will have dealt with the problem in a systematic way in the years preceding the Games. Housing Justice supports both the campaign and the target of a society in which there is no need for anyone to sleep rough. However, the devil, as with many noble ends, is in the detail, or in this case, in the implementation.

To put this 2012 rough sleeping target into perspective, we need to look back at what has been happening in terms of policies to tackle homelessness. In fact, tackling homelessness is one of the unsung successes of the New Labour administration, perhaps because there is cross-party agreement on both the nature of the problem and on the solutions. Since 1997, the number of people sleeping rough in England (I refer only to England because policy on housing and homelessness is devolved to the Scottish Parliament and the Welsh Assembly, and so is different in each of the three nations) has dropped by about 75%. The snapshot figure measured by official street counts has fallen from around 2,000 to about 500. The accuracy and meaningfulness of the street count snapshots has been challenged and it is acknowledged that its main use is as a consistent measure against which progress can be monitored, rather than as a true picture of rough sleeping. For example, in London the snapshot is around 500 for a single night but the number of rough sleepers recorded by street outreach teams over a year is more than 3,000 (the figure for 2009 has not yet been released but is likely to top 4,000).

However, substantially reducing rough sleeping is not the only achievement. Homeless families no longer spend weeks and months in cramped and unsuitable bed and breakfasts, but instead are moved to self-contained temporary accommodation – houses and flats. The standards of hostels for single homeless people have been hugely improved and the number of households in temporary accommodation has been steadily falling since that became a government target. In fact one of the biggest observable differences between UK cities and those in mainland Europe and the USA is the low numbers of street sleepers and beggars.

These successes have been achieved through a combination of targets and monetary investment. There have been a series of initiatives focusing on rough sleepers, on bed and breakfast accommodation, on hostels and latterly on reducing the number of households in temporary accommodation. The government has been holding local authorities to account through fairly stiff targets while providing additional funds, for example to provide outreach services for rough sleepers or to refurbish and re-focus hostels. There are two obvious dangers with this approach. One is that once the extra money is withdrawn (and money is going to be very tight in local authorities for the foreseeable future) the homelessness activity is dropped rather than mainstreamed. The other is that effort goes into meeting the immediate targets and other aspects of the problem are ignored. So, as Crisis' mystery shopping research shows, single homeless people often receive low levels of assistance when approaching their local authority for help, with councils consistently failing even to fulfil their statutory duty towards individuals, let alone take a proactive approach to preventing their homelessness.

The most recent focus on rough sleeping – and on ending it by 2012 – does recognise and support the vital contribution of churches in providing emergency accommodation. There is a realisation, especially given the economic crisis and the pressure on public spending, that the target cannot be achieved without the active participation of local communities and charities, including faith groups. However, there is also a real danger that enthusiasm for meeting the target will lead to unethical and inhumane tactics. We already have examples of this on the streets of the City of London where street cleaning teams are told to wet doorways and other sheltered sleeping sites, and sometimes sleeping bags and even rough sleepers themselves. Rough sleepers talk of being woken for ‘welfare checks’ by police in the early hours of the morning when there are no services open for them to access and of being engaged in conversation so that they can never get enough sleep. There is a real fear that, as 2012 approaches, the use of these sorts of techniques will increase in an attempt to meet the target by wearing people down until they reluctantly accept an offer of accommodation that is not right for them, for example, a bed in a large hostel populated mainly by addicts when they themselves have no substance abuse problems. Or people may be driven to sleep in less safe places, in parks and building sites rather than in doorways, in places where they are more likely to be attacked, robbed or die from hypothermia.

On top of this is the experience of previous Olympic Games: special camps have been created to house homeless people outside city boundaries to hide them from the spectators and Olympic authorities. At Housing Justice we are determined that neither of these things should happen. We are committed to working with the Communities and Local Government Department and with Local Authorities to ensure that rough sleepers are treated fairly. We are also working with More than Gold to help coordinate church responses like soup runs and night shelters to provide humane and compassionate support for rough sleepers.

But beyond practical action there are two questions for homelessness charities and policy makers which are broader than ending rough sleeping, questions which should be of concern to us all and which, perhaps, we can use the focus of 2012 to bring into the limelight of public discussion.

The first is about human rights and enforcement; forcing people to do something that is for their own good or will avoid harm. What is the balance between the human right to a private life and the need to get someone indoors on a freezing night? Is the choice to sleep rough rather than to accept any accommodation indicative of mental illness (does it make the person Sectionable)?  Is it right to use greater force and to focus more activity on bringing rough sleepers indoors than that used on people who are in homes but failing to cope (for example the elderly widower who lives in squalor in one room of a three bedroom house, or the alcoholic woman who has no gas, electricity or water supplies yet barricades her door against visiting officials)? Where should the Church be in these situations and how can we best stand alongside those in need?

The second is about stopping the flow of people into rough sleeping. Strenuous efforts are being made at the moment to house all the current long-term rough sleepers in London, but everyday new people appear on the streets. These new people are fleeing violent homes, or running away from insolvable problems to make a new start, or are on a downward spiral through job loss, bereavement or broken relationships until they are left with nothing but a bag of belongings. Part of the answer lies in building more affordable homes and larger homes to reduce overcrowding – and Housing Justice advocates both of these things. But the causes of homelessness and of rough sleeping go much deeper and need to be accepted as the responsibility of all of us. We need to find ways to become a society where homes are not violent, where people do not battle their problems as isolated individuals, and where family, friends and community work together to catch people before they fall too far down the spiral. Only if we do this can we really hope to end rough sleeping by 2012.