Skip to main content
Photo by fallen_angel at flickr.com 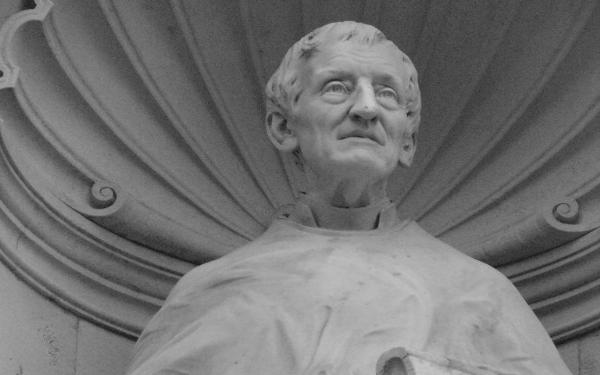 The beatification of Cardinal John Henry Newman will be one of the focal points of Pope Benedict XVI’s forthcoming visit to the United Kingdom. Newman was deeply committed to education, to the provision of spiritual and pastoral care as well as academic excellence. His interest in this field should come as no surprise to us, argues Newman scholar, Roderick Strange, as we learn more about the man whose thought and writings were inseparable from his person.

At the start it might help to remember that those who are canonised are not, therefore, to be thought of as holier than those who have been beatified. Comparing the holiness of those whose sanctity the Church has formally recognised hardly makes sense in any case, but we may sometimes slip into that way of thinking, regarding beatification as a kind of BA in holiness, while those who have been canonised are praised as Masters. In fact the distinction between the two does not lie in comparing their holiness, but in discerning their significance for the Church. While saints are models for the Church as a whole, the universal Church, those who are beatified are being held up first of all as models for a local Church. So as we look forward to John Henry Newman’s beatification later this year, we can ask ourselves how he might be a model for us in England and Wales, and, especially as he declared education to be his particular concern, how he might encourage teachers.

Let me begin by recalling an observation made by Professor Nicholas Lash in 1990. That year was the centenary of Newman’s death and in his contribution to a collection of essays to mark the occasion, Nicholas Lash picked out as the hallmark of Newman’s genius ‘the very closeness of speech to speaker, of text to thinker’. He was pointing out that it is not simply a matter of what Newman had to say; what made a difference was his own distinctively personal way of saying it. And evidence for Lash’s observation can be found independently that very same year. Again, because of the Newman centenary, a series of lectures was delivered in Oxford. One was given by Roy Jenkins who was the Chancellor of the University. He spoke on ‘Newman and The Idea of a University’, but at the end he apologised for speaking so much about Newman and so little about university education, and he offered as his excuse that he found Newman ‘such a wholly absorbing if sometimes tantalising a subject’. We must not lose sight of the man.

But how can we get to know Newman? He wrote so much. The sheer extent of his writings – forty books and thirty-two volumes of letters – is daunting. However, a way of approaching this material that I have found helpful is to be aware of certain themes or preoccupations that recur in what he wrote. There are four in particular. They can act as keys to his thinking.

1. The first was Revelation. Stephen Dessain, that prince among Newman scholars, used to say that devotion to the cause of revealed religion was what gave Newman’s life its unity. In a late work, Newman himself described revelation as ‘the initial and essential idea of Christianity’ (Via Media i, p.xlvii). There has been much written about the theology of revelation, but the crucial point to grasp is that what has been revealed is a gift to us. It is not of our making. What we believe is not something that we have somehow managed to construct for ourselves.

2. A second key theme was the Church. However wonderful a message, it may as well not exist if it cannot be received. We’ve all seen people on their mobile phones, indeed we’ve probably had the experience ourselves, talking away and then losing the signal. No reception, no revelation. Revelation is received by the community of faith, that is the Church. And when you consider Newman’s life – from his early evangelical conversion, through his days as a young Oxford don, beguiled for a while by intellectual excellence, then on into his commitment to the Oxford Movement, that attempt to restore to the Church of England its Catholic tradition, until he comes to be received into the Catholic Church in 1845 – you can read it as a perpetual search for the Church. Where is the Body of Christ, the community of faith, to be found most fully? There revelation will be received most perfectly.

3. His third preoccupation was with dogma, not as something narrow, as rigid dogmatizing. He used to say that in a perfect world the Church would simply have received the Scriptures. But the world is not perfect. And scripture is unsystematic and disputes arise. So what has been revealed and received needs to be articulated. In his Apologia pro Vita Sua, he spoke of dogma as ‘the fundamental principle of my religion’ (Apologia, p.49).

4. And his final key preoccupation was, of course, with education. What has been revealed and received and articulated, must be communicated. It has to be passed on. It is not a private possession. In January 1863 Newman described education as his line (see Autobiographical Writings, p.259). And he referred explicitly to education in a ‘large sense’ of the word. He wasn’t just talking about classroom teaching: he wanted people to craft better arguments by engaging with contemporary culture, broadening and maturing their minds.

You will recognise as well that these points are not separate parts of some grand abstract theory. They have their own coherence: what has been revealed and received and articulated, must be passed on.

These two elements, what is personal and the commitment to education, in particular, the passing on of what has been revealed, received, and articulated, can be combined.

People often describe Newman as a great thinker. Someone once even divided the ages of the Church into the age of Augustine, the age of Aquinas, and the age of Newman. He has been given that status. But he was never simply some remote lofty intellectual. His concerns were always pastoral.

When he went as a young curate to the parish of St Clement’s in Oxford, just beyond Magdalen Bridge, he was still to some extent under the influence of the evangelical conversion that had so affected him as a boy of fifteen. Its dictates declared that most people were damned. Few were saved. But the young Newman, as he met the many good people in his parish, found he could no longer believe that most of them were condemned to hell for all eternity. Then, as a tutor at Oriel College in Oxford, he was dissatisfied with a system that required him to teach his pupils, but would not allow him to offer them moral and pastoral support. What today is taken for granted was seen then as a radical reform. In the event his pupils were withdrawn. Later, as vicar of the University Church, he developed a style of preaching which has become renowned for its pastoral quality. He spoke to his congregation in a way that he hoped would move them to what he would later come to call ‘real assent’. He had no interest in moving their minds without touching their hearts. And then in Dublin, while working in the University he had founded there, he affirmed: ‘An academical system without the personal influence of teachers upon pupils, is an arctic system; it will create an ice-bound, petrified, cast-iron University, and nothing else’ (Historical Sketches iii. p.74). It was always the same message: education is never merely a matter of learning; it involves a care for the person as well.

When Newman spoke about education as ‘his line’ in 1863, he was at a particularly difficult time in his life. It was a dark period. He was feeling a failure because projects that had been entrusted to him in the previous decade – the university he had been invited to found in Dublin, a new translation of the Bible he had been asked to oversee, and the post as editor of The Rambler, the distinguished Catholic periodical, that he had been persuaded to accept – had not succeeded. None of these failures was his fault; he had been thwarted in various ways; but he personally felt deeply despondent. He was also aware of being held in contempt by various people, not being trusted, thought of as a bad Catholic.

To some extent his exchange in 1864 with Charles Kingsley, who had accused him of indifference to the truth, brought him some respite. It led to his writing his Apologia pro Vita Sua, his vindication of his behaviour, that was generally received well; but it drained him personally. There was nonetheless an ongoing dispute over whether he could found an Oratory in Oxford to provide care for Catholic students who might be going to the university. That plan was also frustrated. Then there was a debate on Mariological issues with his friend, Edward Pusey. And during this period he was writing the work on faith and reason that he had always wanted to do; it appeared in 1870 as A Grammar of Assent. Then again at this time he was also engaged increasingly in correspondence about the forthcoming Vatican Council and the controversy surrounding the move to define papal infallibility as a dogma. In brief, they were exhausting years. A great deal was happening. The pressure was intense. But I sketch it because at just this same time Newman had also, so to speak, a day-job: he had founded and was largely responsible for much of the day-to-day running of the Oratory School.

The contribution he made to that work was quite extraordinary. He had set out to establish a school that offered the kind of high quality academic education that was available to those who went to the famous public schools like Eton, Winchester, and Harrow. Those schools fell short, however, from a spiritual and pastoral view. (It was Arnold’s Rugby that began to repair that lack.) In his school Newman sought to combine academic excellence with precisely that spiritual and pastoral care that was lacking in those famous schools, but was notable at Stonyhurst, Ampleforth, and Downside, where, however, academic standards at that time were not so high.

In so many ways education was Newman’s line. He cared for standards, but never forgot the person. He can be an inspiration for teachers and for all of us. So when you think of those who taught you, ask who inspired you and how?

Monsignor Roderick Strange is the Rector of the Pontifical Beda College, Rome. He is the author of John Henry Newman: A Mind Alive (London: Darton, Longman & Todd, 2008)

This article is based on a talk given to headteachers from the Diocese of Arundel and Brighton in the Church of San Giorgio in Velabro, in Rome, 11 March 2010.

To instruct the ignorant

iWitness: ‘The music beneath the noise’