Skip to main content
Photo by peterjr1961 at flickr.com 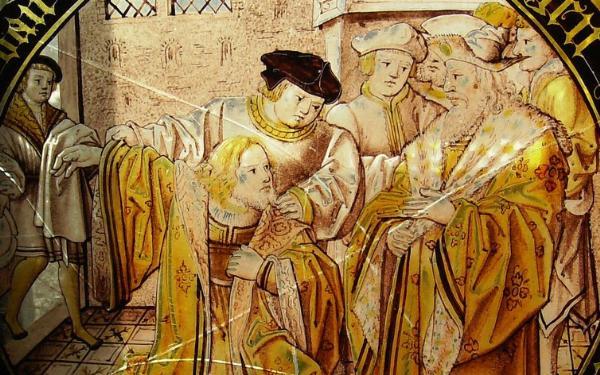 Ahead of this week’s papal visit, Catholics in the United Kingdom will be thinking about how they will engage with the atmosphere and events of the coming days. In a homily delivered last Sunday, Philip Endean SJ suggested that the much-maligned elder brother in the parable of the Prodigal Son might be a character to whom we turn for guidance – what might we learn from him that will allow our faith to be strengthened by this visit?

As we were preparing to welcome Pope Benedict to the United Kingdom, the liturgy of the Sunday beforehand was inviting us to consider the return of the Prodigal Son. The story is, of course, a masterpiece. At least in the context of the other readings for that Sunday, it speaks eloquently of God’s boundless mercy , of God’s readiness to accept us, however much we may feel – and indeed be – inadequate to the divine love: ‘Love to the loveless shown/That they might lovely be.’

If it’s in these terms that you currently hear the story that Luke’s Jesus tells us, then read no further. That reaction is holy, and to be cherished; what follows may be undermining.

But not everyone reads the story of the Prodigal Son at face value. Scholars often suggest that the parable is actually not about the lost son at all, but rather about the elder brother. Luke was crafting his story not for overt sinners, but for self-righteous believers all too prone to identify with the brother’s protests. The elder brother is a killjoy. Churlishly, hard-heartedly, he refuses to enter into the joy of the Lord. Are we going to carry on being like him? Or are we going to find our way to a better frame of mind?

That reading is sometimes helpful too – and it may well have been close to Luke’s intention. Nevertheless, I find myself, as we await a papal visit, taking issue with it. I’m not sure about the bad press the elder brother gets. He seems to me to have something worth learning from, despite everything. For at least he’s emotionally honest. He sees the great party going on, with the father and the son behaving like drama queens, and he reacts against it with revulsion. This reaction is not exactly edifying; it clearly needs to be challenged and corrected. But at least he can admit to himself that he’s got it; at least he can own it and express it. He keeps a sense of his own identity and of who he is when confronted by the emotionally powerful scene in front of him. And because of this honesty of his, there’s some chance that he, and the grace of God, can work with that reaction. We leave him not in outer darkness, but on the party threshold, faced with a decision. And it might turn out all right: he at least admits his negativity. Perhaps God will be able to work with it, so that he too can come home, so that the party can be complete. There’s hope for that elder brother.

Far better his situation than that that of so many ‘nice’ people in polite society, so many well brought up Christians. We can so easily be socialised into sheer terror at our negative feelings, and thus lose the ability to admit to ourselves that we even have them. If that’s the case, then the situation really is bad. Because the negativity looks like piety, it can do real damage. But for the elder brother – however unattractive he looks, however much the red- top headline writer in all of us wants to condemn him – there’s hope.

This week, we are going to be visited by the Pope – or, as piety would have it, by our Holy Father. It’s him who is doing the travelling, not us; but nevertheless there will be many religiously charged, emotional encounters, with the image of holy fatherhood around in large doses – a fatherhood about which many in these islands, both within and beyond the Catholic Church, have complex feelings, rooted in a difficult history.

We may rightly hope that this apostolic journey will really be an occasion when Peter strengthens his brethren. And we can also be confident that such strengthening will be a matter of God’s grace and not much else. For all the frenetic effort going into the preparations, we can – as regards what really matters – be pretty laid back, and let it happen in God’s way.

There’s perhaps only one thing that we ourselves can really sensibly do by way of preparation: learn from the elder brother. Amid what will be a relentlessly collective experience, it’s important that we hold on to a sense of our own selves, our own integrity. Both friends and enemies of the Church will be encouraging us to respond emotionally in the ways they want and expect us to. That’s not necessarily all bad – sometimes other people have something to teach us; but it’s nevertheless important that we not be controlled by others’ expectations. We need to take part in the papal events with our whole selves, our real selves, and not just with the conforming masks we all too readily present in public.

This coming weekend will certainly be an occasion of powerful feeling of mass – pardon the pun – religious emotion. Quite visceral feelings will come into play. But the events of the Pope’s visit will be of religious significance only if we can get beyond pious mob- consciousness, only if they engage each of us at the level of heart speaking to heart.

There’ll be a lot of pressure just to join in the party regardless – if only to put forward a loyal front before the secularist snipers. But the two sons in the parable have clearly found it quite difficult to deal with their father sometimes. One is perhaps luxuriating in easy emotion, while the other feels resentful. Of course, there’s no point in our inventing problems with our faith if we haven’t got any. But if the problems are there, then the elder brother also has something to teach us. We still have much to face, much to work through, before the true party can really begin. What happens in any papal visit, any liturgy, can only be mere foretaste.

The point here of course extends far beyond any one-off papal visit. The story of the Prodigal Son is affectively charged; it plays on aspirations deep within us, on longings reinforced by our secular culture quite as much as by any Church. Much emotional hype surrounds this kind of image, precisely because the reality of which it speaks is often difficult: we struggle, and we sometimes fail.

It’s important that we not let the hype and the headlines – and the press will be full of them – run away with us, and frighten us into the wrong sort of guilt about our untruth. Realism about ourselves is the basis of all true conversion. If we can own how we really feel about God, about the world, about the Church, then we are giving God a chance to work with us. Then primal human relationships, as the Prodigal Son parable promises, can become sacraments of God, even when our Holy Father is not here in the flesh. . Moreover, when Peter does come, there will at least be the basis of true faith on the table – faith which may feel paltry and weak, but faith which Peter can strengthen, faith that itself is also a rock, over which the gates of the underworld will never prevail.