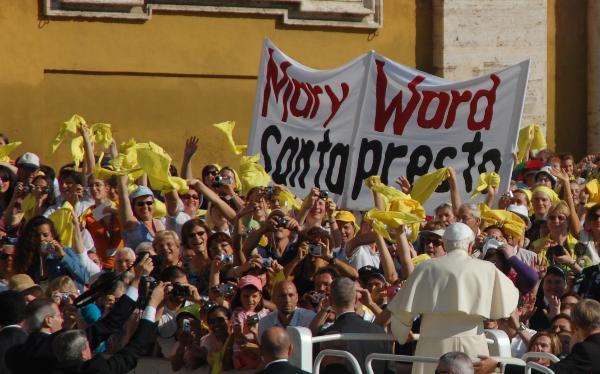 Earlier today, Pope Benedict prayed with members of the religious congregations of the United Kingdom, and focused particularly on their role as educators. Education, he said ‘is about forming the human person, equipping him or her to live life to the full’. Gemma Simmonds, Director of the Institute for Religious Life at Heythrop College, considers the vital importance of the visibility of religious life in light of the Pope’s words.

On the second day of his state visit to the United Kingdom, Pope Benedict met representatives of the religious congregations and orders in Britain, along with teachers in the chapel of St. Mary’s University College, Twickenham. St. Mary’s has played a long and distinguished role in the history of Catholic teaching in these islands, founded in 1850 by the Catholic Poor Schools Committee to provide much-needed training for teachers who would offer an education to the growing numbers of poor Catholic children. Starting in the charge of the Brothers of Christian Instruction with an intake of twelve young men, its administration was taken up in 1899 by the Vincentians at the request of the Catholic hierarchy. Moving to Strawberry Hill in 1925 to accommodate 250 students, and admitting women in 1966, the college now has over 3,500 students and gained university college status in 2006. This history, combining the pioneering spirit of religious orders and their contribution to Catholic education and culture in Britain was echoed in the Pope’s speech.

Inevitably, given the venue and the occasion, the Pope emphasised the contribution made by those religious directly involved in educational apostolates, but his words remain relevant to those who have long handed over administration of their institutions to lay people or whose ministries have widely diversified. Above all he stressed the transcendent dimension of teaching and study not just as the imparting and acquiring of knowledge, even knowledge of Catholic doctrine, but as the formation of the whole human person towards mature and responsible citizenship in today’s world or, as he put it, the ‘imparting of wisdom’. In this and in his remarks about the monastic orders whose ‘dedication to learning as the path on which to encounter the Incarnate Word of God [laid] the foundations of our Western culture and civilization’, he placed the consecrated life in all its manifestations firmly within the wisdom tradition of the Church. Given the increasing ecological focus of many of Pope Benedict’s theological reflections it is no surprise that he sees the search for God as requiring active engagement with the principal means of God’s self-revelation, creation and God’s revealed word.

This can be seen as something of an endorsement of the emphasis that many religious in Britain have placed in recent years on the pursuit of justice, peace and the integrity of creation as part of the living out of their vows. It was a particular delight to the author of this article that the Pope took the opportunity to pay special tribute to the pioneering vision of apostolic religious life for women of Yorkshire born Mary Ward and her ‘English Ladies’, as they were known in Germany when they taught Joseph Ratzinger as a small boy in the Englische Fräulein Kindergarten in Tittmoning in the district of Traunstein, from 1929-1932. He is said to have happy memories of Sr Korbinia, one of the sisters who taught him. Perhaps it was these memories which led him also to stress the vital importance of Catholic schools providing ‘a safe environment for […]those entrusted to us for their Christian formation […] Indeed, the life of faith can only be effectively nurtured when the prevailing atmosphere is one of respectful and affectionate trust’. It may be significant that he chose to name Mary Ward as a pioneer of women’s apostolic life rather than specifically as an educator, given the amount of hostile publicity there has been about the alleged breach between the Catholic and Anglican Churches over the ordination of women priests and bishops. Mary Ward taught that ‘there is no such difference between men and women that women may not do great things’. Perhaps it is not too optimistic to hope that the Pope’s good memories of his education in this vein might urge him to open up new possibilities for women to claim their voice within the decision-making processes of the Church and wider faith community.

The Pope spoke of the presence of religious within Catholic schools as a ‘powerful reminder of the much-discussed Catholic ethos’, which makes the life of faith, in all its aspects, the driving force of the Church’s educational mission. This living out of the life of faith incarnate will enable the young, through their encounters with religious, to discover Christ’s ‘being for others’. This is possibly an allusion to the Jesuits’ self-chosen identification as ‘men for others’, and lays a strong emphasis on the importance of young people having actual access to, through quite ordinary, everyday encounters with women and men religious who have consecrated themselves by religious vows. This is a contentious issue in some quarters, where the abandonment of traditional ministries by religious often came about after painful conflict among the religious themselves. The lay governors of a school where I myself worked for 17 years proposed placing cardboard cut-outs of the sisters in the school and grounds, so crucial did they rate the presence of the nuns to be in maintaining the ethos of the school. Of course the success of so many lay-run Catholic schools, formerly in the hands of religious, has shown that such drastic measures are not necessary, but the emphasis on the incarnational aspect of religious life is worth consideration, and brings up the vexed question of visibility.

‘Being for others’ lies at the heart of all religious consecration, whether it be lived out in the monastic/contemplative or apostolic/missionary life. If that life becomes invisible to the emergent generation of young Catholics, and to our fellow citizens in general, they are not only missing out on what the Pope has described as the ‘faithful, loving witness to Christ, the supreme Teacher’. We teach best what we model, whether it be a life of radical simplicity in the face of rampant consumerism, single-hearted love in the face of the commodification of the human body, brotherly and sisterly forbearance and love in the face of the fragmentation of families and communities, or the rule of communal discernment instead of narcissistic individualism. If we are to be credible and convincing witnesses to the power of the Gospel in the consecrated life, we must seek and find new ways to incarnate that witness in a way that is accessible to those among whom we live. Today’s message from Pope Benedict to the religious of Britain made it clear that he continues to value the contribution made within the faith community by religious who, not only by their words but by their life, offer a living witness to the radical message of the Gospel.

Gemma Simmonds CJ is a lecturer in pastoral theology and director of the Religious Life Institute at Heythrop College, University of London, and author of ‘Mary Ward’ in English Catholic Heroines, ed. Joanna Bogle, (Gracewing, Leominster, 2009) and ‘John Paul II and the Consecrated Life’ in The Vision of John Paul II: Assessing His Thought and Influence, ed. Gerard Mannion, (Collegeville, Liturgical Press, 2008)