Skip to main content
Photo by Manila Ryce at flickr.com 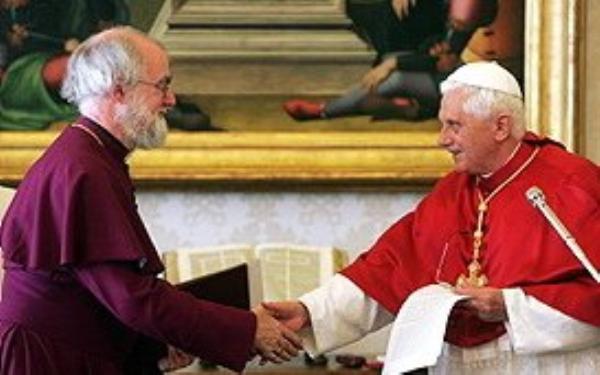 The Pope’s historic visits to Lambeth Palace and Westminster Abbey were among the most eagerly anticipated events of his visit, and there was much curiosity about how he would address these ecumenical gatherings. Oliver Rafferty SJ analyses the significance of the honest but welcoming words exchanged yesterday by Pope Benedict and the Archbishop of Canterbury.

The carefully choreographed ecumenical aspects of the Pope’s second day in Britain were a triumph not just for the public perception of inter-Church relations, given the tensions between Rome and Canterbury in the course of the last year, but they also demonstrated the genuine warmth that exists between Pope and Archbishop. Of course the day was not just given over to a celebration of Catholic-Anglican relations. All the other mainstream Churches in these islands were represented at the evening prayer service in Westminster Abbey. Indeed in the run-up to the Pope’s visit the Archbishop of Canterbury expressed the hope that Pope Benedict’s time in this country would cement ties between the Catholic Church and all the Christian communities in Britain. The Pope in his address at Westminster Abbey referred explicitly to the Edinburgh Missionary Conference of 1910, which is widely regarded as having laid the foundations of the modern ecumenical movement. That Edinburgh Conference was inspired by the experience of Protestant missionaries who were confronted with the difficulties of presenting different versions of the Christian gospel in a context which gave scandal to those whom they were trying to convert.

One of the clear themes that emerged in the speeches at both Lambeth Palace and Westminster Abbey is that the Churches are presented with an analogous difficulty today in preaching the gospel in a culture which is either indifferent or hostile to the Christian message. Pope Benedict at the Abbey invoked the figure of St Bede the Venerable as a model for the ‘enculturation’ of the gospel ‘in contemporary language and culture’, but in a manner which nonetheless upholds ‘fidelity to the word of God’. This then is the challenge that confronts the ecumenical movement in our day. The social reality of Britain is not, however, simply one of indifference to Christianity. We also must contend with the problems posed by what is perceived to be one of the strengths of contemporary British society: multiculturalism.

Pope Benedict observed that relations with people of non-Christian faiths were important since all people of faith witness to the transcendent in human life in an increasingly fragmented world. At the same time, in a remark which will not have pleased everyone, he emphasised the uniqueness of salvation won by Christ. This is the dilemma, according to the Pope, in the Church’s ecumenical journey: to be ‘inclusive but not at the expense of Christian truth’. Archbishop Williams is also acutely aware of the task confronting the Churches in bearing witness to Christ, as he put it, in a society that wants to portray Christian faith as ‘an obstacle to human freedom and a scandal to the human intellect’. But that is precisely the great ecumenical challenge to the Christian Churches in modern Britain. Given their history and experience, the Catholic and Anglican Churches are in pole position to rise to that challenge. But there are immense obstacles that may prevent the two churches jointly embracing such a task.

The Archbishop and the Pope both adverted to the history of the Anglican–Catholic rapprochement in the last fifty years and it is perhaps worth rehearsing some of the high points of that ecumenical journey. Since the groundbreaking meeting in 1960 between Archbishop Geoffrey Fisher and Pope John XXIII, meetings between the bishops of Rome and Canterbury are scarcely novel. Nevertheless Pope Benedict’s visits to Lambeth Palace and Westminster Abbey are historic firsts. Encounters between Pope and Archbishop in the past have represented milestones in the improvement in relations between the two Churches which were separated from communion with one another at the Reformation.

Despite the official position of the Catholic Church, as articulated in the condemnation of Anglican priestly orders by Pope Leo XIII in his 1896 encyclical Apostolicae Cuare, in recent times Popes have accorded Archbishops of Canterbury all the marks of epsicopal recognition. Dr Williams adverted to Archbishop Michael Ramsey’s visit to the Vatican in 1966. In the course of that meeting Pope Paul VI gave Archbishop Ramsey his own episcopal ring. Indeed Dr Williams wore that ring yesterday. Pope Paul on that occasion referred to the Anglican Church as ‘our well beloved sister’. Following that extraordinary encounter the Anglican Roman Catholic International Commission (ARCIC) was established in 1967 to explore common theological issues, to look at disputed questions between the two Churches and to chart the road to corporate reunion. ARCIC has had two phases: 1970-1981 and 1983-2005. In fact ARCIC II, as both Archbishop Williams and Pope Benedict recalled, was set up following Pope John Paul II’s visit to Canterbury during his pastoral visit to Britain in 1982.

The ecumenical climate has cooled considerably since the heady days of the 1960s and 1970s when it looked as if there might be a real breakthrough in ecumenism. There are a number of reasons for the decline in ecumenical progress, the most serious of which was the decision by the Church of England in 1992 to ordain women to the priesthood. The general Synod took the decision that year despite a warning from the then Cardinal Joseph Ratzinger that such a move would represent a new and grave obstacle to union between the two Churches. In a sense of course the die had been cast by other Churches in the Anglican Communion which were already ordaining women to the priesthood.

The ordination of women had profound internal implications for the Church of England. Many individuals could simply not accept such a decision. The Church made episcopal provision for those who, in conscience, could not accept women’s ministry. Other Anglicans went over to Rome, including Graham Leonard, the former Bishop of London. The problem has become more complex still with the decision in some parts of the Anglican Communion to allow women to become bishops, and further to consecrate openly practising homosexuals to the episcopacy. It is in this context that Rome and Canterbury experienced their most difficult crisis in relations since the defection of numerous Anglicans in the nineteenth century. Pope Benedict, responding to the pastoral appeal from some disaffected Anglicans, announced the setting up of Ordinariates in the Catholic Church to enable groups and parishes within Anglicanism to come over to Rome and retain something of their own customs and traditions. Dr Williams was clearly distressed with this development and made his anguish, and indeed, if the reports are to be believed, his anger, known to the authorities in Rome.

This painful history was very much in the background during day two of the Pope’s visit. There is, however, a real problem for the Churches. Division between Christians can at times, as seen for example in Northern Ireland, have murderous consequences. Division calls into question the credibility of the gospel. Christ himself prayed that his followers might be one so that ‘the world might believe’. Dr Williams made clear at Lambeth his conviction that the ministry of both the Anglican and the Catholic Churches in this country is ‘made less by the fact of our dividedness’. The Pope did not rise to that bait, saying that it was not his intention ‘to speak of the difficulties that the ecumenical path has encountered and continues to encounter’. At Westminster Abbey, however, he showed no such reserve. Without adverting directly to current Anglican views on women’s ministry, and for some parts of the Communion, the ordaining of openly practising homosexuals, Benedict declared that for the Church, fidelity to the word of God ‘is an obedience which must be free of intellectual conformism or facile accommodation to the spirit of the age’. And he continued ‘This is the word of encouragement which I wish to leave with you … and I do so in fidelity to my ministry as the Bishop of Rome and the successor of Saint Peter, charged with a particular care for the unity of Christ’s flock’. Equally Dr Williams reminded the Pope, following the words and inspiration of Gregory the Great, that the role of the Bishop of Rome in the Church was to be ‘the servant of the servants of God’. The Archbishop also stressed that the Pope’s task in the Church was to exercise a ministry of ‘patience and reverence towards all’ in creative love. It is unlikely, however, that such a ministry will be tolerant of developments within Anglicanism which the Catholic Church, taking a position that is shared in this instance by the Orthodox Churches, sees as too much of a concession to the ‘spirit of the age’.

Despite these hard-hitting sentiments, couched as they were in dulcet tones, the general and lasting impression of the ecumenical aspects of the Pope’s visit are of mutual friendship, love and a shared sense of promoting the Christian message in an environment which no longer seems to be especially interested in it. Later in the year the Archbishop will travel to Rome and it is thought that at that time he and the Pope will announce the establishment of ARCIC III. However, the goal of reunion between Catholicism and Anglicanism seems as distant as ever. But as was demonstrated yesterday this does not prevent the Churches from presenting a spectacle of real harmony and unity of purpose despite division and diversity. And that perhaps, above all, is a vision we need in our fragmented and divided world.

Pope Benedict’s address to the Archbishop of Canterbury

‘To all people of good will’