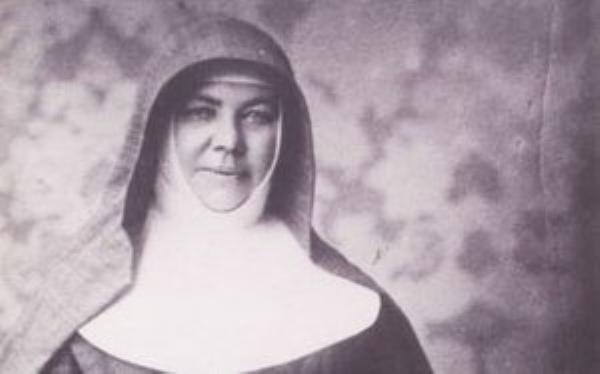 History will be made this Sunday 17 October as Blessed Mary MacKillop is canonised in Rome and becomes Australia’s first saint. The Sisters of Saint Joseph of the Sacred Heart introduce us to their co-founder, a woman whose relationship with the Church was complex, but her faith in and service of God unceasing.

This will be an historic day for the Church and for Australia, as the Universal Church recognises Mary as someone who lived a life of heroic goodness, born of her closeness to God and her love of all she met, particularly the poor and marginalised. In canonising her, the Church holds Mary up to us and to all who come after us, as a special companion and example for us in our own lives.

Who was Mary MacKillop?

Mary MacKillop was an ordinary woman who lived an extraordinary life.

She was born in Fitzroy, Melbourne on 15 January 1842 to Scottish immigrants, Alexander and Flora MacKillop. The family home for Mary and her seven siblings was faith-filled, but often turbulent and troubled due to Alexander’s various failed business dealings which created insecurity in the family income. About her early life she writes, ‘My life as a child was one of sorrow, my home when I had it a most unhappy one.’ For much of their lives the family was dependent on relatives for shelter and support. At age 16, Mary became the main provider for the family. She worked as a governess, then as shop assistant in the stationers ‘Sands and Kenny’, and finally as a school teacher in Portland, Victoria. At 18, Mary moved to Penola, South Australia to work as a governess/teacher for relatives. With a real heart for educating poor children, Mary was soon teaching not only her cousins but many other children from the local area. At Penola, she met Fr Julian Tenison Woods and together they started a school for poor children. In 1866, the pair became co-founders of the Sisters of St Joseph of the Sacred Heart. It was the first religious order to be established by an Australian.

Over the next several years the Order grew and the Sisters travelled the countryside setting up schools, orphanages for abandoned or neglected children and other good works for those in need. They were prepared to follow farmers, railway workers and miners into isolated outback areas and live as they lived. Mary and her Sisters soon moved into Queensland and eventually to New South Wales, Victoria and New Zealand.

The Sisters moved freely about the colonies, wherever they learned of a need, a freedom which was resisted by some bishops and others. In 1871 Mary became the subject of a campaign by some of the priests of Adelaide who complained to the Bishop about Fr Woods’ direction of the Order and Mary’s administration and personal conduct. This culminated in Bishop Sheil excommunicating Mary from the Church. Shortly before he died in 1872, Bishop Sheil recognised his mistake and lifted the excommunication, and Mary was completely exonerated of any wrongdoing. As a result of these events, she made the epic journey to Rome by sea in 1873/74 to have the rule of her Order approved by the Pope. Despite her increasingly poor health, Mary’s Sisters continued to flourish in their work for the poor and needy in Australia and New Zealand. She died in North Sydney, on the site where her tomb now lies, in 1909, aged 67.

The Road to Sainthood

Even at the time of her death, those who knew her, or knew of her extraordinary work, spoke openly of her holiness – her heroic goodness. Cardinal Moran, the Archbishop of Sydney, is reported as having said after his final visit to her that, ‘This day I consider I have assisted at the death bed of a saint’. The Australian press, both secular and religious, were uncommonly united in speaking of her holiness, her heroic service of God, her open hearted love for the poor and deprived, and her determination to bring a Catholic education to the children of the colonies. Ordinary people also exhibited extraordinary signs of devotion to her.

After many years gathering together the necessary information on Mary’s life, the official Cause for the Canonisation of Mary MacKillop was begun in 1925. In January 1995, Pope John Paul II beatified Mary MacKillop during a Mass at Randwick Racecourse, Sydney. This followed official recognition of a woman being miraculously cured of cancer after praying for Mary’s intercession. The recognition in December 2009 of a second miracle, also a woman being cured of cancer, ensured Mary’s path to canonisation.

A Saint for our Time

The Church does not make a saint – it recognises a saint. Canonisation is the act by which the Holy Father declares in a definitive and solemn way that a Catholic Christian is actually in the glory of heaven, intercedes for us before the Lord and is to be publicly venerated by the whole Church.

Canonisation is a double statement – about the life of the person and also about the faith of the people who are alive at this moment. They are as much a part of the canonisation as the person who is being recognised.

Sr Anne Derwin, the Congregational Leader of the Sisters of St Joseph, said Mary’s canonisation will be an occasion for gratitude and an opportunity for personal reflection.

‘Mary MacKillop lived her life with an unwavering sense of gratitude and confidence that God would always provide,’ she said.

‘She spoke over and over of “our good God” and she lived with grateful receptivity of God’s love and all that God’s love asked of her in life. She truly imitated the Christ to whom she had committed her life.

‘At this historic time, let us be truly grateful to God for the gift of canonisation which calls us to renewal of our commitment to Christ and to the mission of God in our world’.

This article was taken from a prepared text by the Sisters of Saint Joseph of the Sacred Heart.

Sisters of Saint Joseph of the Sacred Heart

The Saint and her Sibling: Mary and Donald MacKillop

iWitness: From Scotland to Rome – Memories of a Pilgrimage