Skip to main content
Photo by martin_kelley at flickr.com 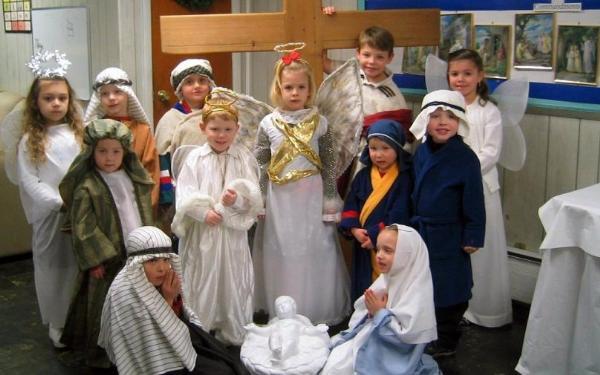 Over the coming days, regular churchgoers will be joined at Mass by many people who are largely absent from parish life – but what are we to make of this increase in Mass attendance? Michael Bossy SJ asks whether the presence of occasional Mass-goers on these rare occasions is a mere pretence for the sake of show and ‘tradition’, or if it should be welcomed as something of genuine spiritual value.

I am down to say the children’s Mass at 7pm on Christmas Eve in my parish. It is likely to be an attractive occasion. The children, in large numbers, will come into the church, some dressed as angels, some as shepherds; they will carry candles and be helped by the catechists to put them along the altar rails. We will bless the crib after one of the children has placed the baby in the manger; we will accompany the angels in singing the Gloria; we will manage a few Christmas carols and give Silent Night a run. Parents will be present in big numbers, delighted to see their children in a prominent position in the church.

Not everything will go smoothly. The responses to the prayers at Mass will be pretty feeble and the Creed (shall I give it a miss?) will be a trio between a couple of catechists and myself. The time of Holy Communion will be a mixture of the devout, the awkward, the glum and the chatty. It’s a reasonable guess that quite a proportion of the parents haven’t been to church since last Christmas. This would account for the large increase in the number of people at Mass at Christmas in comparison with an ordinary Sunday; in addition to the children’s Mass, the church will be jam-packed at midnight Mass and there will be a sizeable congregation at each of the Masses on Christmas morning.

How are we to react to such occasional Mass-goers? What do they get out of it? Why do they bother especially at Christmastime?

I hope lightly to touch upon some of these questions.

A very understandable response from more regular churchgoers goes rather like this: ‘How can you expect children to come to church when their parents don’t bother?’; ‘You can’t expect us (more regular Mass attenders) to do the work of the parents’; ‘Considering the amount of time they spend shopping you might think they could spend a few moments with God.’ Or, more pleasantly, ‘If only people could realise that Jesus, Mary, the crib and the Mass are the centre of Christmastime.’ And all this slips into entirely proper complaints about the big shops starting to sell Christmas stuff in August!

These are very understandable responses. But somehow they and others like them infuriate me. Why?

I think it is because they ignore the fact that the basic family Christmas is, at its best, a graced event in itself.

What do I mean? Well, at Christmastime we all make an attempt to connect with those we have rather forgotten during the year. We send cards to friends saying, ‘We must meet up in 2011’; we phone our family in Liverpool, in Medellín, in Cracow; children are placed at the centre of things – we take photographs of their delight in opening their presents; relatives are welcomed on their visit as graciously as possible and their irritating ways put to one side for the day; everyone has to have a gift – people exhaust themselves around the shops not just for show but because everyone must have a present at Christmastime; if things go well we remember to send a small cheque to a chosen charity, or visit the old lady on her own who lives above us in the flats. More than this we do what we rarely do now and that is we sit down for a large family meal. At least until we get tired, we are all at our best and we wear our best clothes to show it.

Gifts, communication, children, welcomes, meals: all these are graces; they are signs of God’s presence. They are truly sacramental. God is with us.

The parents coming to the Christmas Eve Mass are already celebrating God’s presence, in their home.

The subject of signs of grace in the life of the world is sure to remind someone of my age of Fr Rahner: grace, God’s presence in the life of the world, was his special subject. In the then wastelands of theological study, his work, however difficult, was a beacon of hope. He could have knocked off a couple of thousand words on ‘On going to Mass at Christmastime only’ during the coffee-break at Innsbruck after a tougher morning on ‘the infinite horizon’ or ‘the supernatural existential’.

I took down one or two of his twenty-four volumes of essays to see what I could find. Here are one or two sentences:

The world is ceaselessly possessed by grace from its innermost roots. Grace is not one particular process apart from human life. Rather it is the ultimate depth of all that the spiritual creature experiences – and so in its laughter and in its tears...in its loving, living and dying...whenever man keeps faith with the truth, breaks through his own egoism in his relationships with his fellows...whenever, in a word, life is lived as man would seek to live it, in such a way as to overcome his egoism,... [emphasis in original]

then it is, Fr Rahner says, that God is truly present.

Does it not then seem that a family Christmas at its best is a truly graced event, the presence of God? Even before or apart from our explicit presence before God at Mass.

As the congregation returns home from the Mass on Christmas Eve, what might they have gained? In what spirit do they go back to their homes? We can only offer guesses, and here are mine. They will have a certain lightness of heart and step – it comes from sensing that they have done something good; they may happily recall something of the innocence of their own childhood; they may place greater hope in the goodness of the human spirit and connect this more securely with God and the child in the crib; they may even have a keener sense of wonder and of the astounding goodness of God. Can one hope that they will have a small sense of consecrating their lives to God? Maybe – maybe not.

If they are rare comers to church, they may miss the more bracing elements of Christmas – ‘and all this that he might die on the Cross for me’, as St Ignatius puts it, the cross that figures in so many ways in the great pictures of the Nativity. They may not get beyond a sentimental, cuddly, Bing Crosby idea of Christmas. And as for the Mass, probably it only reveals much of its mystery to those who regularly bring their lives before it.

Can I help those occasional Mass-goers at the celebration on Christmas Eve? If the gospel can be read with clarity and vigour; if a period of silence were possible; if they stared at the crib; if they felt able to receive Holy Communion, then I hope it would be more than a superficial occasion. Might they become regular members of the worshipping community? Perhaps not. Though, maybe, they would come to church at Easter and on Ash Wednesday, if not each week.

We can paraphrase for occasional Catholics part of the prayer that Evelyn Waugh put on the lips of St Helena in a different context: we pray that they too will, before the end, find kneeling place in the straw; let them not be quite forgotten before the throne of God when the devout come into their kingdom. Grace is already with them. We may help to make it more conscious, more stable.

Michael Bossy SJ is a former Headmaster of Stonyhurst College and is currently on the parish team of the north London parish of St Ignatius, Stamford Hill.

The age of innocents