Skip to main content
Photo by spyderracer393 at flickr.com 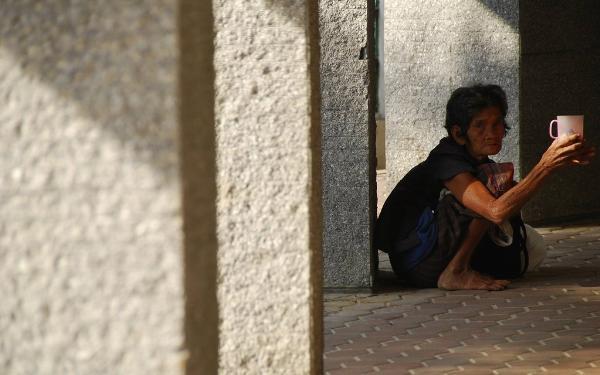 In Homelessness Week, Gerald O’Collins SJ asks us to think about the way in which Jesus identified himself with the homeless, and took every opportunity to speak about and help them. When we consider that Jesus himself was homeless for much of his life, how does this challenge us to see the face of Jesus in all of those in need?

As Jesus remarked to Judas Iscariot, ‘You always have the poor with you’ (John 12:8). Looking around at the cities, towns and refugee camps of our world, we might make this remark more specific and say, ‘we always have the homeless with us.’ Jesus had some powerful things to say about the situation of the homeless, and did many things for them. He was also a homeless person himself.

Jesus: one of the homeless

Jesus did not start life at home or in a hospital. He was born in a stable and his crib was an eating trough for animals. That’s how his life began, as a homeless baby, born to parents who were sleeping rough. He had hardly come into the world when Mary and Joseph took him across the border to escape the murderous intentions of King Herod the Great. Jesus became a baby on the run, a homeless asylum-seeker in Egypt.

During the years when he was growing up in Nazareth, Jesus did enjoy a home to live in. But, once he was baptised by John and began his public ministry, he became again a homeless person. Speaking about himself as ‘the Son of Man’, he said: ‘Foxes have holes, and birds of the air have nests; but the Son of Man has nowhere to lay his head’ (Matt 8:20; Luke 9:58). Foxes can be safe because they live in warm burrows down in the earth; birds can be safe and sound in their nests, high up in trees: but Jesus did not have that kind of safety and security. He had no home he could call his own, no fixed dwelling where he could lay his head on a pillow and go to sleep at night. He lived his life out in the open, sometimes alone and sometimes sleeping rough at night.

At the end, Jesus did not die at home or in a hospital, being supported by the kind of care that dying people can expect. He died by slow torture as a kind of barbarous entertainment for curious spectators. Who is more homeless than a person nailed up on a cross? Jesus had been stripped of his clothes to die in agony, with no home, no possessions, no bank account and hardly a friend within sight.

In his own particular way, Jesus was born, lived and died as a homeless person, the brother and friend of all homeless people and of all refugees and asylum seekers.

Jesus’s concern for the homeless

Jesus repeatedly showed his practical concern for homeless people. Let me mention only two of many examples: a possessed man and a leper. Mark’s Gospel tells at length the story of a demoniac (Mark 5:1-20). He behaved in a violent, anti-social and self-destructive manner. He lived among the tombs and belonged to the realm of the living dead, an outcast from society, someone with whom no one wanted or dared to live. Without being asked, Jesus delivered the demoniac from the evil spirits who tortured him and restored him to a normal existence. No longer feared and despised, the man could once again share a home and take his place in society.

Ignoring the law about keeping his distance from other people, a leper came close to Jesus, fell at his feet and said: ‘If you choose, you can make me clean’ (Mark 1:40-45). Jesus’s heart went out to the poor man; he touched his ravaged face and cured him. The homeless leper no longer had to sleep rough but could now return to his home and family.

The homeless in Jesus’s parables

In ways that have continued to challenge his followers ever since, Jesus also spoke about homeless people in two parables and in his picture of the last judgment. In the parable of the Good Samaritan (Luke 10:25-37), Jesus told the story of a traveller who had been robbed and was left lying badly wounded at the side of a country road. It is a parable that I once helped to re-enact.

One evening in Sydney I was walking down a suburban street with one of my sisters and a female cousin of ours. At the time my sister was a social worker, our cousin was a nurse and I was a newly ordained priest. A man was sitting on the footpath, with his feet dangling into the gutter and his body gently swaying backwards and forwards. The smell of spirits caught us as we walked by. Half an hour later the three of us came back along the same street to find an ambulance crew loading the man on board. He was drunk all right. But he had been sitting down because a car had hit him, breaking his leg, and driven off. ‘It’s the Good Samaritan story all over again’, my sister commented. ‘Only this time, instead of a priest and a levite passing by on the other side, it’s been us three – a priest, a social worker and a nurse – passing by on the same side.’

In the story that Jesus told, the Samaritan might have pushed on down the road to the inn and told the innkeeper: ‘There’s a man lying wounded up the hill. Can’t someone do something about it?’ But his heart had gone out to the victim of the bandits, and he personally took charge of the situation. He used the wine that he was carrying to clean the traveller’s wounds and provide a kind of antiseptic. He applied some olive oil as a salve to soothe the pain. Then he tore up some spare clothing to bandage the wounds. Loading the traveller on his own mount, he took him down the hill to the inn, and spent the night looking after him. The following morning he paid the innkeeper’s two denarii, the amount that could cover a two month stay in an ancient inn, and promised to return and pay for any further expenses. Caring for the wounded man cost the Samaritan some wine, oil, clothing, money and an unexpected, overnight delay. The parable has put two questions to Christians ever since: Will you let your heart go out to those in distress? Will you care for them, even at considerable personal expense?

In a second parable, that of the Rich Man and Lazarus (Luke 16:19-31), Jesus presents another man faced, this time day after day, with a homeless person in terrible need. The parable does not suggest that the rich man has gained his wealth by immoral or even criminal practices. His sin is one of omission: although he has the money to be elegantly dressed and extremely well fed every day, he ignores a destitute person at his doorstep who would have been satisfied to eat the leftovers from the lavish feasts. It is a painful contrast that Jesus describes here. The rich man dresses in the most expensive clothing and presumably has many friends, as well as his five brothers and other relatives, to gorge themselves at his table. Lazarus is ‘dressed’ in his sores. No one comes to do anything for him but some dogs. Where human beings fail in their duty of loving concern, the animals at least do what they can. By licking the sores of Lazarus, they give him some relief. The rich man enjoys nothing but ‘good things’, whereas Lazarus has almost nothing but ‘evil things’.

The painful contrast continues after death, but now in a strikingly reversed manner. The poor, homeless Lazarus is carried away by angels to be ‘comforted’ in Abraham’s bosom: that is to say, in the life to come he enjoys a choice position at the heavenly banquet. The rich, well-fed man dies and is ‘buried’, an ominous word that receives immediate clarification: he has gone down to be tormented in the underworld. When he looks up, he sees Lazarus at the side of Abraham. In his tragic situation the rich man now needs a little help from Lazarus, the very person he cruelly neglected during life on earth. He pleads with Abraham: ‘send Lazarus to dip the tip of his finger in water and cool my tongue, for I am in agony in these flames.’

But, as Abraham stresses, Lazarus and the rich man are now separated. During their earthly existence, they lived a very short distance from each other. The rich man could very easily and quickly have brought some food, clothing and medicine to Lazarus. Now, however, ‘a great chasm’ keeps the two men apart. It is impossible for them to meet. Even if Lazarus wants to perform some act of kindness for the tormented rich man, a huge gulf separates them.

What’s the difference between the rich man and the Good Samaritan? The latter does everything he can for the wounded victim of robbers; the former does nothing for the homeless and starving Lazarus, who is lying not some distance away down the road but right there, day by day, at the entrance to the rich man’s house. The rich man seems like a professionally religious person who uses the ‘right’ words but fails to live out his faith. Three times he uses the ‘right’ words in his dialogue with Abraham, calling him ‘Father Abraham’, ‘Father’, and ‘Father Abraham’ again. The parable of the Lazarus and the rich man shows in a dramatic fashion how religious words on their own are not enough.

The very face of Jesus

The picture of the last judgment (Matt 25:31-46) puts before us six kinds of people: the hungry, the thirsty, aliens, the naked, the sick, and prisoners. The distress they suffer involves most of them in being homeless.

In the two parables mentioned above, Jesus did not say: ‘I was lying robbed and wounded by the side of the road and you took care of me’, or, ‘I was covered with sores and begging for food at the entrance to your home, and you fed me and cleaned my sores’. In speaking of the last judgment, however, Jesus goes beyond the two parables and identifies himself with those in terrible distress. He is the asylum seeker, he is the wounded traveller, he is the beggar covered with sores. Such people bring us the very face of Jesus. They express his never-ending stations of the cross. In and through the homeless, the refugees, the prisoners, the hungry and sick, Jesus continues to be in agony; in them his passion goes on.

The Old Testament prophets vigorously reminded their audiences to care for widows, aliens, orphans and other people in distress. But none of them took the further step that Jesus did. He identified himself with the homeless and all others in terrible need. That remains the heart of his challenge to all of us. Jesus, the homeless One, have mercy on us.

This is an abbreviated version of a lecture delivered for the St Vincent de Paul Society in Bendigo, Australia in November 2010.