Skip to main content
Photo by Mac McLernon at flickr.com 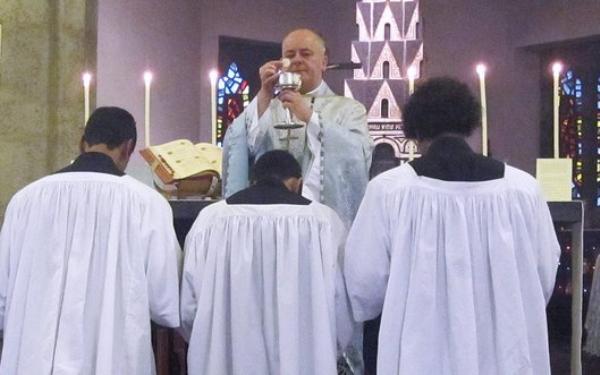 The words with which we prepare to receive the Eucharist are changing with the introduction of the new English translation of the Missal. Liturgist, Andrew Cameron-Mowat SJ asks if these new words, which replace a prayer that has been in use since 1970, express the essence of our ritual preparation to share in the body and blood of Christ.

At the heart of the renewed liturgy is the moment when the faithful, aware of their utter reliance on God’s mercy and the healing power that only Christ can give, move in dignified procession, whether on foot or by the help of a care-giver, or stay seated because of infirmity. Their sole aim is to receive their true Redeemer and Saviour, their Lord and their Brother, in the Sacrament of the Eucharist. Through these living symbols Christ transcends barriers of judgement, creed, even the physical laws of nature itself, to nourish and strengthen us. Through this miracle we are made new, healed in mind, body and spirit, and drawn into the very mystery of God and the promise of eternal life.

The ritual process leading to this everyday miracle – in the Roman Rite at least – builds on the words of the Eucharistic Prayer, in which thanks have been given and the Holy Spirit has been invoked to bring about the transformation of the gifts of bread and wine. The entire assembly has joined in the proclamation of the Memorial Acclamation and the Amen, and then prays the Our Father, with its urgent appeal for ‘our daily bread’ and its promise to forgive the sins of those who sin against us. We then perform the ritual gesture of sharing the Sign of Peace, as a reminder that we are not only to say the words in the Our Father, but also to carry them out. The gesture is not empty, nor is it one-sided: our hearts are filled with the expectation that our heavenly Father will now ‘give us this day our daily bread’ and will also ‘forgive us our trespasses’: we are to be enriched – strengthened by the bread that heals and reconciled with our neighbour and with God.

There are several important differences at play here with the pre-Vatican II ‘usage’: the Holy Spirit was not invoked to transform the gifts; there was no proclamation of the Memorial Acclamation; the assembly were expected only on rare occasions to join in proclaiming the Our Father; there was no exchange of peace among the members of the assembly; the ‘Domine, non sum dignus’ prayer was for the priest alone. For members of the congregation wishing to receive the Eucharist, the ritual itself gave little verbal or gestural support towards active participation of this kind.

And it was ‘active participation’ that was at the heart of the matter. Pius X used this phrase to promote the singing of the chants of the Mass by the faithful so that, by their participation, they might feel more ready and more willing to receive their Lord in the Eucharist at the Mass they were attending. The renewal of the liturgy which he promoted came to its fruition in the Missal of Paul VI, which, in its original Latin form, gave far more for the members of the congregation to say, to sing and to sign by gesture. Traditionalists were quick to condemn what they saw as the ‘protestantisation’ of the sacred liturgy in the Missal of Paul VI: prayers which had previously emphasised our sinfulness, the dangers of hell and damnation in our present world, the importance of fear and loathing of our present existence in comparison to the rewards that await us if we remain pure, were transformed into words of love, of healing, of peace, of the possibility of the renewal of humanity, and stressed the optimism of faith in Christ’s redeeming work. This ‘Novus Ordo’ was swiftly translated into the various vernaculars around the world and we have been using the English version now for nearly forty years. This version is officially replaced on the First Sunday of Advent this year.

So the ritual process between the end of the Eucharistic Prayer and our reception of the Sacrament has been in daily use now since 1970 and is about to suffer a linguistic stumbling block for which we have received unhelpful preparation. The arguments offered for the new translation of the ‘Domine, non sum dignus’ prayer are twofold: first, it helps us to appreciate more the scriptural riches on which much of our liturgy is based. We are using the words of the Roman Centurion, a non-Jew, who professes himself not to be worthy (Matthew 8:8), or sends a message of the same import via Jewish elders (Luke 7:6-7), to have Jesus enter his house – just as he ordered those beneath him to act as instructed, so he declares that someone of Jesus’s power could easily do the same. Secondly, the translation is closer to the Latin original.

The words, however, no longer fit the ritual: we are not now asking for someone else to be healed, but ourselves. We are not preventing the Lord from coming into our house; we go still further and willingly receive him into our very selves. This prayer was proclaimed for centuries by the priest on his own, with little expectation of the lay faithful receiving the Eucharist at the Mass which he was celebrating. Through the brilliance of the original translators forty years ago, it has become a sacred text which unites the whole assembly in proclaiming not just our unworthiness, but also our readiness to receive wholeheartedly that which Christ himself offers to us. We no longer express this in the new text, but speak modified words of the centurion, words which, through allusion, we already understood to have a scriptural foundation.

The original translators understood well the most important elements of the Latin text: our unworthiness; the desire in us to receive Christ into our very selves; the faith that proclaims that Christ has the power to bring healing simply by his word; and our need of healing. They also understood that simply to use ‘soul’ for anima would be insufficient in grasping the full meaning of the prayer. Christ comes to us in his Body and Blood with the possibility and expectation that we will be truly healed wherever that healing is needed. The power of the love of Christ to heal is limitless. We believe that in receiving the Eucharist we receive Christ’s true Body and Blood. This moment is for us the deepest expression of the relationship that the risen Christ has with us: a relationship of complete and accepting love and trust. By receiving Christ, while acknowledging our total unworthiness to receive such a gift, we are praying that he will transform us into his own Body. The words of the 1970 text, ‘and I shall be healed’ indicate that we are open to whatever miracle Christ wishes to bring about by uniting himself with us.

These reflections were provoked by my own difficulties with grasping why the new text is an improvement and by comments from people who find it difficult to incorporate the new words into their prayer. What seems clear is that the text which we are about to lose will always be in the background for those who will think of it as perhaps containing the more effective meaning of the new translation.

More articles on the new translation of the Missal on Thinking Faith:

‘Words in Essence’ by Frances Novillo

‘And with your Spirit?’ by Jack Mahoney SJ

Let it begin with me

Wording a Radiance: Parting Conversations on God and the Church