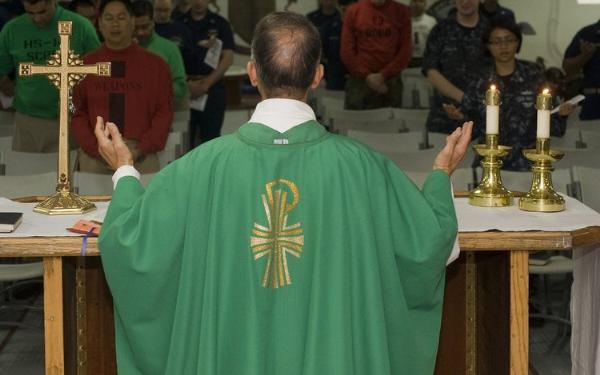 From the first Sunday of Advent, all English-speaking Mass-goers will be using the full text of the revised translation of the Missal. One revision in particular, to one of the most familiar people’s responses, has caused some confusion among congregations who have already begun to introduce the new translation. Jack Mahoney looks closely at the response, ‘And with your spirit’ and directs our attention to one aspect of its meaning that we might otherwise neglect.

Some people try to explain the introduction of ‘And with your spirit’ by claiming that it refers to the effect of the Holy Spirit in the priest, so it becomes a prayer that the Lord will increase the grace of his priestly ordination. In a recent number of The Pastoral Review, for instance, one writer explained that the ‘spirit’ is ‘the identity which the Holy Spirit bestows upon them in Ordination and which they exercise in the Liturgy’. Another explanation proposes that the people pray that in his ministry the celebrant will be faithful to the spirit of his ordination. Similar interpretations can be found elsewhere, one even referring to the response as a prayer that the Spirit strengthen the ‘character’ of the sacrament of ordination received by the priest.[1]

All of these glosses seem to go back to the authoritative 1950 study of The Mass of the Roman Rite by the famous Austrian Jesuit, Josef Jungmann, and his commentary on the phrase. He first explains it as simply a Jewish way of saying ‘you’, observing tersely, ‘This is a Semitism: Spiritus tuus = your person = you’, a view shared by J. A. Fitzmyer in his comment that sometimes ‘it is a mere substitute for the personal pronoun’.[2] Jungmann, however, went on to note that St John Chrysostom in the fourth century, ‘referred “thy spirit” to the indwelling Holy Spirit’, and also explained that ‘and with thy spirit’ points to the celebrant performing the sacrifice of the Mass ‘in the power of the Holy Spirit’.[3] Indeed, Chrysostom does explain that the people’s response is addressed to the celebrant as the person about to offer the sacrifice and notes ‘the invisible grace’ of the Spirit being present in the celebrant to bring about the mystical sacrifice through him.[4] Chrysostom thus seems to be the ultimate authority for the interpretation of the response in terms of the priest’s ordination, even though Jungmann, while describing Chrysostom’s view, does not himself accept it.

Back to the Bible

It should be recognised for a start that it has nothing to do with the Holy Spirit: it appears to be just a common formula for saying farewell. Also, it is mostly addressed to whole communities, not to their presbyters or ministers, far less to ordained priests. But as we try to get closer to what it does mean, we see that in the Bible the term ‘spirit’ sometimes just seems equivalent to ‘soul’, or ‘life’, as when in Luke’s Gospel the dying Jesus prays, ‘Into your hands I commit my spirit’, quoting Psalm 31:5, a prayer which is imitated by Stephen in Acts 7:59. Elsewhere the psalmist prays that God will put ‘a new and right spirit within me’ (51:10).

A similar understanding of the term is exhibited in Paul’s contrast between the spirit and the body or the flesh, as when he describes some believers as ‘holy in body and spirit’ (1 Cor 7:34). At other times he contrasts the spirit with the mind, as when he notes that ‘my spirit prays but my mind is unproductive’ (1 Cor 14:14-15) or when the Ephesians are urged to ‘be renewed in the spirit of your minds’ (Eph 4:23). Disconcertingly, however, Paul can also draw a distinction between the spirit and the soul, as when he prays for the Thessalonians, ‘may your spirit and soul and body be kept sound and blameless’ (1 Thess 5:23). ‘Spirit’ here may seem to be redundant to those accustomed to thinking of individuals as being made up of just bodies and souls, and one commentator describes it as ‘a baffling tripartite anthropology’ which is ‘much debated’.[7] Perhaps the simplest understanding is to view the three terms as referring to different aspects of the individual person: the body denoting the physical component; the soul meaning the principle of life; and the spirit as referring to the intellectual, or thinking, dimension. This seems to harmonise with other occasions when Paul uses the term ‘spirit’ in a religious context, as when he describes himself as serving God ‘with my spirit’ (Rom 1:9), or praises fellow-Christians who have ‘refreshed my spirit’ (1 Cor 16:18), or urges the Roman Christians to ‘be ardent in spirit’ (Rom 12:11). The Pauline farewell phrase, ‘with your spirit’ thus can be viewed as locating the person within a reflective religious context, commending his correspondents to God.

Taken over into the Eucharist to express the people’s response to the celebrant’s greeting of, ‘The Lord be with you’, the phrase is to be understood fully as ‘And the Lord be with your spirit’. The really important point here is not the word ‘spirit’, but the word ‘with’, a word which could not appear simpler yet which in the Bible contains great theological richness. In a previous article for Thinking Faith entitled ‘God with us’, I used the phrase’s frequent appearances in the Old and New Testaments to show that it points to God giving a task to someone who protests that they are inadequate to fulfil it, only to find their objection met with God’s counter-promise that he will be ‘with’ them, guaranteeing that with his help they can fulfil the commission he has given them.[8]

So here we have a partnership between priest and people, a partnership with a purpose: each praying that the Lord will be ‘with’ the other in their shared act of worship. This Eucharistic act is something they would not dare to consider themselves adequate to undertake, had they not received the Lord’s commission that his disciples ‘do this in memory of me’ (Lk 22:19); and it can be undertaken now only because the risen Christ himself promised to be ‘with’ his Church until the end of the age (Mt 28:20). That is surely the main point underlying the phrase, ‘And with your spirit’?

Jack Mahoney SJ is Emeritus Professor of Moral and Social Theology in the University of London and a former Principal of Heythrop College. His latest book, Christianity in Evolution: An Exploration, is being published by Georgetown University Press, Washington, D.C.

[5] See the inspiring section 9 of the Council’s Decree on the Ministry and Life of Priests.

More articles on the new translation of the Missal on Thinking Faith:

‘Words in Essence’ by Frances Novillo

God Is Not Great: Why Religion Poisons Everything