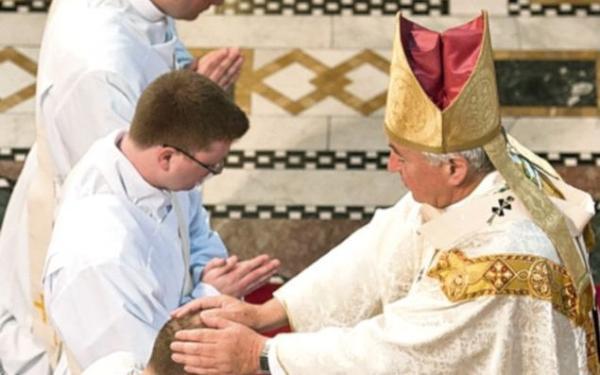 The BBC Four series, Catholics began last week with an episode entitled ‘Priests’, filmed at Allen Hall, the seminary of the Diocese of Westminster. Philip Endean SJ reflects on the picture of seminary life that was painted by the programme and how this fits into the wider canvas of priestly ministry.

‘Gorgeously shot’, as one critic put it, the first of Richard Alwyn’s BBC Four documentaries on modern British Catholicism focused on life in Allen Hall, the diocesan seminary in central London. The film evoked well the mystical, or magical, aura of impending priesthood, set off all the more powerfully by the seminarians’ obvious humanity and foibles.

Mainstream Catholic responses to the film so far have been positive. One can imagine that vocations directors will use this documentary as a resource for several years to come. Moreover, even for viewers outside Catholicism, the imaginative appeal here is powerful. Catholic ritual and symbolism offer a channel into a world beyond, a set of mediations between our messy earth and the glory of heaven. Graham Greene and Evelyn Waugh could write powerful novels out of such a vision, investing folktale motifs of hidden identity and transformation with rich theological significance. It is all part of this package that human beings have their problems and weaknesses—a point that needs no labouring in the context of Catholic priesthood today – but the overall message is that darkness does not ultimately triumph. The darkness cannot master the divine Truth, working through and despite the failings of weak mortals such as Greene’s whisky priest. In the end it is not about us. We are only the earthenware jars containing the treasure.

If this documentary reflects accurately what is now happening, then a change of cultural mood is setting in within the Catholic Church, at least among its leaders. Choices are being made, at the cultural and institutional levels, about what we take and leave from Vatican II and from the wider legacies of the long 1960s.

Of course some changes originating from that period have established themselves irreversibly. Whereas clerical celibacy in the bad old days was an institutional given demanding that recruits grin and bear it in silence, the modern seminary is clearly doing its best to promote a healthier appropriation of what can only be a charismatic gift from God, beyond our power to articulate at all clearly. Whereas Allen Hall’s predecessor was located in a rural, isolated setting, it is now seen as something positive that the seminary, though still a place of religious discipline, is situated within a city and that its students study for civilly-accredited degrees in a university setting.

But these changes exist alongside a reaffirmation of much that I, as a priest within a religious order educated a generation ago, was encouraged to move beyond. The documentary showed us considerably more about the Sacred Heart and the Blessed Sacrament than about the Bible, which was at no point a central focus; the seminary’s spiritual culture owed more to popular devotions than to critical reflection. As seminarians starting in the 1970s we might have somehow begun with the kind of awed anticipation that ‘saying Mass is everything’, expressed vividly by one of the Allen Hall students a few weeks before his ordination. We might even have thought it our role to become ‘a bridge between man (sic) and God’. However, in time we learnt, for better or worse, not to deny the positive intent of such talk, but rather to place it within a richer context: a fourfold presence of Christ in the Eucharist, not only in the sacramental elements and in the priestly minister, but also in the Word and in the assembly itself (Sacrosanctum concilium §7). It was drummed into us that we as priests were not the only agents of the Church’s ministry: we needed to learn how to work with others, and take our leads from them. We learnt to acknowledge the witness of other Christian churches and to understand ourselves as in partnership with them: it was a travesty to see the churches of the Reformation merely as having denied some important articles of faith. We were taught also that, whatever problems beset ‘the world’, we had much to learn precisely about God and holiness from beyond the Church’s frontiers, and that the Church could represent not only God’s irrevocable promise of salvation, but also a part of the problem.

At one point, the film shows Nicholas Austin SJ at Heythrop College teaching feminist ethics, and making the point that the moral theological tradition has, until very recently, been carried forward by priests. Within the film, this thought was left hanging: we segued (was the irony intentional?) into a rather longer sequence of male seminarians saying the rosary before a somewhat kitsch Madonna. The women teachers in the seminary appeared only briefly and in peripheral roles, in one case congratulating a seminarian on being at last allowed to wear the dog-collar. But a generation ago, feminist and other liberation theologies, allied with a new-found appreciation for Scripture, appeared as harbingers of radical change. It was this institutional conversion that we thought we were being prepared to work for. Today, the agenda seems more one of preservation, even restoration.

How well the film reflects the seminary’s lived reality I do not know; it could be that the temptation to evoke sacral aura just ran away with the film-makers. At any rate, we heard only brief mention, and saw nothing, of an untypical and farsighted feature of Allen Hall: its policy of sending out its students for a whole year of placement in parishes midway through their courses. There another sort of education must surely take place, one in which people at large have a real chance to deepen the future priest’s sense of faith outside the supports of seminary life. Perhaps there an important balance is struck. But only once in the film do we get a hint of such learning: during a reflection session, a seminarian reminisces in awe about his experience with a dying lady, and the seminary’s pastoral director responds gently about how hard and challenging such experiences can become, unobtrusively holding the young men open for what only life and time can teach them.

Indeed, though I devoutly hope that the seminary exposes its students to tougher intellectual questions than the film ever suggests, the overall sense I took from Alwyn’s documentary was positive. For what came through at almost every turn was the honesty, goodness and groundedness both of the seminarians and of their teachers. The seminarians referred pointedly to the abuse scandals and the decline in clerical numbers, and rare was the moment when one felt that there was anything phony or put-on about their convictions. Perhaps – hard though it is for someone like me to say this – there may be a real movement of the Spirit in the setting aside of much that was thought important in my formative years. And if this is not so, the present regime is nevertheless at least preserving, even fostering, some of the basic human qualities these prospective priests will need if they are to remain sensitive to the Spirit into the future. On that basis, even Vatican II fogeys can find hope.

Catholics continues with ‘Children’ on Thursday 1 March and ‘Women’ on Thursday 8 March, both at 9pm on BBC Four. The series will be available on BBC iPlayer for a limited time.

Watch this programme on BBC iPlayer until Thursday 15 March 2012

Afflicting Our Souls: Fasting in the Old Testament

There Will Be Blood