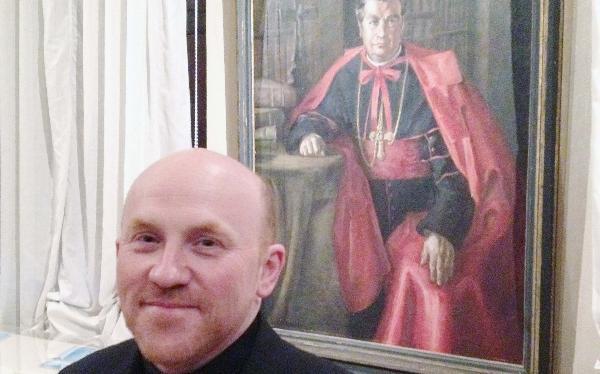 A new exhibition in Pisa brings together science and religion in a place where their relationship has, historically, been fruitful. Br Guy Consolmagno SJ of the Vatican Observatory, one of the sponsors of the exhibition, explains that the life of Pietro Cardinal Maffi, a former Archbishop of Pisa, was an example of the deep union of science and religion, a union which this exhibition seeks to nurture.

We enter through a narrow room with an arched ceiling on which stars are projected. Behind us is a photo of an ancient Mayan observatory; beside us, an image of Stonehenge. Before us, bathed in blue, are a series of chambers with astronomical photos, meteorite samples (including pieces of the Moon and Mars), and instruments from the Renaissance to the 19th century that measured precisely the positions of the stars. In place of honour is a glass case with a hundred-year-old globe of Mars, hand-painted in astonishing detail with Percival Lowell’s canals in all their glory.

The passageways to each successive room of the exhibit are marked by glowing blue strips of light. Through them we pass from our solar system, to our galaxy, to the galaxies beyond our own, until we reach the realm of the Cosmic Microwave background, the echo of the Big Bang. From here, one turn brings us to an explanation of how we can read the colours of stars to learn their make-up and history; another turn takes us to modern experiments and satellites, looking for gamma ray bursts and gravity waves.

This is the exhibition, Storie Dall’Altro Mondo – ‘Stories from Another World’ – which opened in Pisa on 9 March 2012 at the Palazzo Blu, an elegant mansion on the banks of the Arno that has been converted into a public exhibition space. It is a beautifully crafted show. But two things in particular make this exhibit stand out from other astronomy displays.

First, it is being co-sponsored by an interesting group of collaborators: the Vatican Observatory; the Italian National Institute of Nuclear Physics; the Department of Physics at the University of Pisa; and the Archdiocese of Pisa. This disparate assemblage shows how universal is our desire to understand our place in the universe.

But in conjunction with this unusual mix of scientific and religious institutions, there is a special personal connection to these themes. For in fact, this is not the first time that science and religion have been found together, in one place, in Pisa. Indeed all of them coexisted in the life of Pietro Cardinal Maffi.

Cardinal Maffi served as the Archbishop of Pisa in the early decades of the 20th century, from 1903 until his death in 1931. He was notable during that time for being a friend of the Italian monarchy, even at a time when it was under suspicion from the Church; after relations between the Church and Italy were normalised, he presided at the marriage of the Crown Prince Umberto and Princess Marie-José of Belgium in 1930. At the same time, though, he was an outspoken opponent of the Fascist regime, denouncing them publicly in 1925.

But he was also a scientist and a historian of science, writing popular astronomy texts (most notably Dei Cieli, ‘On the Heavens’) and a series of papers on the unity of science and religion. Famously, he proposed that a statue should be raised in Pisa to honour Galileo, its most famous astronomical son. (This proposal was turned down by the city, apparently for political reasons.) At the Vatican Observatory, we remember Cardinal Maffi in his role as president of the Observatory during its formative years. After its director was found to be less than competent at making reliable observations, he brought in Fr Johann Hagen SJ from Georgetown University to be its new director, the first Jesuit to hold that post.

Maffi’s life is celebrated at the exhibition in a room that includes his letters and writings on matters both religious and scientific. Among the displays, for example, is a book on Chinese astronomy and geography that he received from friends in China, which may be the work of the famous Jesuit missionary, Matteo Ricci.

The interaction between science and religion is often portrayed as an age-old conflict, with only recent, begrudged, acknowledgements by the Church of the scientific nature of the universe. The truth, though, is just the opposite. In the time of Matteo Ricci and the Jesuits who manned the Imperial Observatory in China – along with many national observatories throughout Europe – science was done by clerics. (Often they were the best educated, or indeed the only educated, residents of their parishes.) The efforts of Cardinal Maffi to educate the general populace in modern astronomy are now more than a hundred years old.

Too often, however, as Maffi himself experienced, the supposed science-religion conflict is provoked by those outside the Church looking for a stick to beat it, with the unwitting collusion of ultra-religious fundamentalists, ignorant both of science and their own religious heritage, who live in fear of the modern world.

But perhaps the most important point to remember from the life of Maffi, and the exhibit itself, is that science and religion do coexist of necessity in one place: within the person who does the science, for reasons often religious; and within the person who practices the religion as a way of worshipping the Creator, made manifest in His physical universe.

The theme of the Pisa exhibition is ‘the universe within and without us.’ Back in February, when the Vatican Observatory’s role in this exhibition was first announced, our director, Fr José Funes, made special note of this connection between the universal and the particular. ‘The history of the universe could not be told without our “small” human stories,’ he said. ‘Cardinal Maffi lived a dual existence: the world of the Church and that of science… in the search for the deeper meaning of human existence.’

Br Guy Consolmagno SJ is curator of meteorites at the Vatican Observatory.

The exhibition, Storie Dall’Altro Mondo is showing at the Palazzo Blu, Pisa, Italy, from 9 March to 1 July. Descriptions are presented in Italian and English. Admission is free.