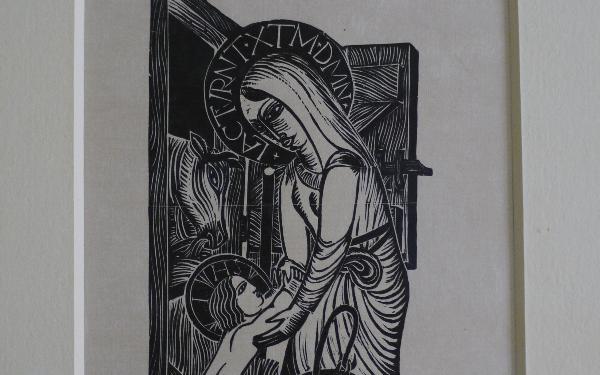 The month of the Church’s traditional Marian devotions has to come to an end, but James Hanvey SJ suggests that our particular contemplation of the Mother of God should not be limited just to May. Through Mary we receive and understand the grace of God in a special way - ‘we see the truth of God’s promises fulfilled’. How can we be attentive to this all year round?

‘May is Mary’s month.’ So begins Gerard Manley Hopkins’ poem, The May Magnificat. As usual with Hopkins, when we think we are in the realm of popular piety he springs a question, presents a metaphor or throws in a step-change rhythm that arrests us. In The May Magnificat, after the opening statement he asks ‘and I/Muse at that and wonder why?’ Why May? Why Mary?

Hopkins goes on to answer his question by drawing deep natural and supernatural connections between Mary, the mother of the Lord of Life and the renewal of life in spring. May is not only the month of Mary but of the Church. For Hopkins, there is an intimate and necessary connection between Mary, the Church and the Holy Spirit: indeed, the Spirit is the vital ground of all things renewed in Christ, for the Spirit is ‘the Lord and Giver of Life.’ The natural liturgy of the seasons and the liturgy of Christian worship seem to come together in directing us to the abundance of life, both in nature and in grace. [1]

Hopkins is a poet whose work is a form of experimental masterclass in the life, work and expression of the Holy Spirit: the dynamic artistry of grace at work in all that is human; the very life of all creative things, their unique and distinctive energies and their deep koinonia. This converges in Mary who exemplifies the action of grace in a human life. It is a mothering action which both brings us to birth, ‘And makes, O marvellous!/New Nazareths in us’. In this sense, she never ceases to incarnate Christ in us because being ‘full of grace’, ‘she shall yet conceive/Him, morning, noon, and eve.’[2] In Mary we see that grace is endlessly creative and recreative and this is the life – that capacity for new beginnings – that Hannah Arendt calls our ‘natality’, though for her it remained a purely human, this-worldly, capacity. Hopkins might remind Arendt that, in fact, Mary shows us that to be truly a human capacity, natality is and must be a graced reality. It is not just an endlessly creative resistance to the inevitable destructions of history, matter and human corruption. ‘Natality’ springs from the divine life within us that constantly ‘mothers’ us into the new life of grace. This ‘natality’ also has a face – it is precisely the way which Christ comes alive in us without diminishing of our own uniqueness. Redeemed in Christ we are coming to our fulfilment, coming to be who we are – who God has created us to be. We become transparent to Him in this world, just like Mary:

This one work has to do,

Let all God’s glory through,

God’s glory which would go

Through her and from her flow

In other words, May is the month when, with Mary, we celebrate the work of grace in us and in the world. Through Mary and in her we see the truth of God’s promises fulfilled.

No doubt some Dawkins-esque anthropologist will theorise that the pagan rites of spring get ‘baptised’ by Marian devotions. Underneath the Christian veneer lie the primeval fertility cults and mother goddesses, and Mary somehow absorbs them all. One of the great features of all religions is that they hold collective memories and customs. There is nothing wrong with that. In religious practices, traditions and customs, we must expect to find these ancient memories because they are usually marking the great foundation rhythms of human life, its meaning, place and purpose. Often overlooked by anthropological rationalism and the symbolically impoverished de-mythologising is an appreciation of the way in which religion can not only carry the rhythms and memory of a pagan past but change them, transposing them into a new key of understanding. It is always a distortion to place Christianity within the secular category of religion and tie it to the methodologies and understanding of the social sciences. Of course, Christianity like any other social reality can and must be studied, and we need a variety of disciplines and approaches to do this well. Yet this should never be allowed to suppress the challenge that Christian revelation and self-understanding presents to the presuppositions of these approaches and the methodological theistic neutrality which they claim to inhabit and make normative.

At the heart of Christianity is a shocking claim: that it is not a purely human creation; it is not the result of some great founding insight or a gradually developed system of integrated beliefs about the vast energies and forces of the cosmos, in which the human person is both subject and agent. Christianity lives from the action of the Holy Spirit and person of Jesus Christ, the Son of God whose life, death and Resurrection redeems us from the futility of an existence without or against God and the distortion in our way of knowing and being that this state brings about. It reveals to us the inexhaustible love of the Father and allows us already to participate in the eternal life of the Triune God, even in our finite and temporal existence. In other words, the Christian life lives in a world already under the reign of God, ‘charged with the Grandeur of God’, which is not just the transcendence of the divine but the glory of the personal love of God, Father, Son and Holy Spirit. This is the world of grace and all the different forms and possibilities of its action. So, how might someone who does not inhabit this world, with its new possibilities and God-given way of understanding and acting, gain some insight into it?

I suggest that they might consider the way in which the Christian faith constantly returns to contemplate Mary of Nazareth, the Mother of God. In her they will see both the scandal and originality of the Christian life and reality. It is a vision of an incarnate God, constantly active in his loving and saving self-gift; a personal God who calls us into a free relationship with him, and only in that relationship is our freedom fully realised. Here is that reversal of the Kingdom, celebrated in Mary’s Magnificat: where the ‘yes’ is not an act of subjection or subservice, but a self-gift of loving service which lives in the transcendence of God’s own self-gift; it is the way in which we choose to live beyond ourselves, not for ourselves, ‘but for him.’ In this sense, Mary is also the stumbling block for all the atheistic secularisms and their values which can sometimes creep into even Christian life and ways of thinking. Mary, who always draws us into the life of her Son, also keeps us open to the mystery that is God’s redemption and sanctification of the human and created order. In this way we can discover the constantly new beginning, the natality of the Spirit which allows us to announce our Magnificat not only in May but in every time and season.

[1] The traditional dedication of May to Mary and the encouragement given to use it as a month of Marian devotions was promoted by Paul VI is an encyclical, Mense Maio in 1965. In this he was endorsing a long tradition in the Catholic Church. Although obviously popular throughout the Church’s life the current tradition of dedicating May to Our Lady was taken up by the Society of Jesus in the 16th century. It was especially promoted in the Roman College of the Society of Jesus and the Marian congregations founded in 1563 by the Belgian Jesuit, Jan Leuens. These congregations – more commonly known as Sodalities – were mainly designed for students and laity. They offered a ‘rule’ of life which sought to integrate prayer, regular attendance at the sacraments, the practice of the virtues and service of the poor and sick. They grew very rapidly and were a means of building up the life of the laity according to the Tridentine reforms. They continued with considerable vitality and effect up until Vatican II, after which they developed into Christian Life Communities.

[2] Gerald Manley Hopkins, The Blessed Virgin compared to the Air we Breathe, 59-62.

'The Nativity', Part One: A love triangle like no other

The Assumption of the Blessed Virgin Mary