Skip to main content
Photo by floridjohn at flickr.com 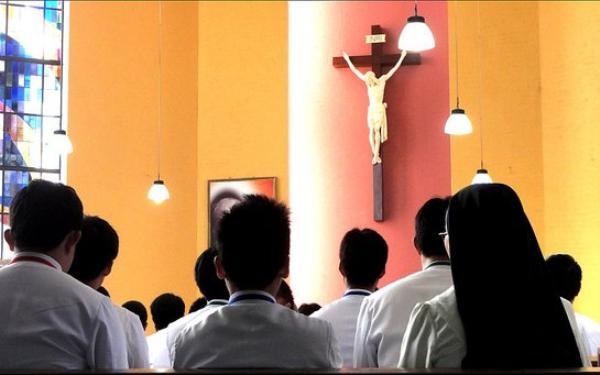 Gemma Simmonds CJ, the editor of a new collection of essays exploring contemporary religious life, introduces some of the sensitive but crucial questions with which she and her fellow contributors have engaged. Has there been a loss of the distinctiveness of religious life since Vatican II and if so, what will be the lasting effects on the ministry and mission of women religious in particular? Is the future full of hope?

2012 has been a year of commemoration in the UK. We began with the centenary of the sinking of the Titanic, moved seamlessly on to the Queen’s Diamond Jubilee and, lest we should be hankering for more by the end of the year, we will soon be moving into lengthy celebrations of the Second Vatican Council’s fiftieth anniversary. Diaries are already filling up with conferences, book launches, symposia and the like. It was, after all, a Very Good Thing, or at least so many of us feel. The revisionist waves coming over the sea notwithstanding, it feels like something worth celebrating.

I have heard it said many times that few groups in the church took the Council’s plea for aggiornamento so much to heart as the women religious. There was, it must be said, plenty of updating to do. But time has a way of sweeping on, and the battles and perspectives of yesterday are no longer those of today. A new generation is asking different questions and religious life is under the microscope once more. The applying of labels like ‘liberal’ and conservative’ in this context is both meaningless and misleading, but there is no denying the tensions that have arisen.

There has been a recent flurry of media interest in religious life in the UK in the aftermath of a press conference announcing a perceptible rise in the number of women entering religious congregations. In my persona as director of the Religious Life Institute I found myself besieged by newspaper, radio and TV journalists eager to interview novices or vocations enquirers, professing themselves and their employers keen to ‘give a true picture of today’s reality’. I tried, patiently, to point out that this could be a particularly vulnerable time in a person’s life, and that candidates might not wish to be dipping their toes into such unknown waters with the world’s media looking on, asking intrusive questions. At the same time I acknowledge that if we religious want to communicate positive stories about our way of life we need to try to appear co-operative when the media come calling. I could have saved myself the time and effort it required to contact those in formation, both within my own congregation and elsewhere, and to act as liaison between them and the media. In the event several interviews were set up, but when editors discovered that the women being interviewed were not wearing religious habits they immediately lost interest. When I pointed out that this was, in fact, the ‘today’s reality’ they were so eager to convey, several said that nevertheless this did not fit with the editorial line they had in mind. So much for reality news.

When I tell fellow-religious this story they react with predictable exasperation. But few move beyond being irritated by media obsession with sound bites and instant visuals to asking whether there are any deeper implications for what is happening here. We live in a culture that is dominated by symbol and image. We have, for good or ill, largely abandoned the symbolic dimensions of apostolic religious life and the images traditionally used to convey its meaning and reality. Significant numbers of younger vocations enquirers (though admittedly not all) are seeking a life that is culturally as well as theologically distinct from the one they hope to leave, and wonder what differentiates our life from their own.

The Religious Life Institute at Heythrop College, University of London, was founded some four years ago to offer a forum for theological exploration of topics related to religious life. Its members, drawn from a wide variety of religious congregations and supported by the Conference of Religious of England and Wales, seek to do this through a free standing course on the theology of religious life, study days and seminars, and the production of CDs, articles and books to promote further study and discussion. Their recent book, A Future Full of Hope?, has already undergone a reprint only weeks after its initial publication. This response suggests that such material is more than welcome. One area that the book tackles, from a variety of perspectives, is that of the distinctiveness of religious life. It is a sensitive area, bound to raise the temperature in debates, particularly among women religious. But if there are questions that dare not speak their name, we know there is something to be answered. This is a sign of the times, but not always a clear one, and we should be no more reluctant to adapt to it now than our forebears were fifty years ago.

Some would say that the distinctiveness of apostolic religious life lies chiefly in its mission. Women religious have in some cases been particularly courageous in abandoning the protective environment of large institutions and going out among the poorest and most marginalized. While this has earned them the gratitude and loyalty of those they serve and the admiration of those, not always members of the Church, who have observed them do it, it has also brought them into conflict with church authorities. Sometimes their insertion into the culture or mindset of those they serve has rendered them physically and ideologically less than visible, and this has also proved problematic for those seeking in religious life something other than the characteristic signs of contemporary culture. The massive adaptation to modern life that came in the aftermath of Vatican II came alongside huge shifts in the social, cultural and economic status of women in many countries. Whatever the cause, the effect on numbers and the demographic profile of female religious life has been devastating. Some sociologists of religion have observed that the Council itself, with its emphasis on the primacy of the baptismal vocation and the universal call to holiness, may have unwittingly caused this disaster. The loss of distinctiveness in terms of corporate ministry, lifestyle and sense of identity has removed religious life as an opportunity for religious virtuosity.

As we move into the celebration of Vatican II’s fiftieth anniversary it is hard to know whether we are cheering on a jubilee flotilla of boats, perhaps battered and scarred by many wars, but heroic in their heritage, or watching helplessly while a stately liner sails to its doom as those in charge rearrange the deck chairs. Either way, the question mark in A Future Full of Hope? remains a key part of the title.

A Future Full of Hope? is published by Columba Press, Dublin.

More about A Future Full of Hope?:

Gemma Simmonds talks about A Future Full of Hope?:

Listen to Timothy Radcliffe OP’s lecture from the launch of A Future Full of Hope?

Gero McLoughlin SJ’s review of A Future Full of Hope? on Thinking Faith

A Future Full of Hope? on the Columba Press website

More about the Religious Life Institute:

A Future Full of Hope?