Skip to main content
Photo by sbisson at flickr.com 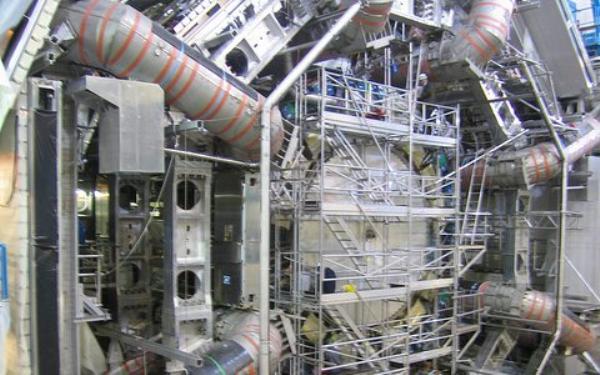 It has been reported this week that scientists at the Large Hadron Collider have increased their levels of certainty that they have found the Higgs boson. Where does this mysterious particle fit into our picture of the universe? Former particle physicist, Fr Andrew Pinsent, explains the science behind the discovery of the Higgs and introduces us to some of the most crucial figures in the centuries of research upon which its prediction was based.

After nearly fifty years of work, the construction of the most complex research machines in history and the strenuous efforts of tens of thousands of scientists, two experimental collaborations at the CERN laboratory announced on 4 July 2012 the ‘probable’ discovery of the Higgs boson, the missing piece of the so-called Standard Model of physics. As this particle is sometimes called the ‘God Particle,’ thanks to the title of a popular science book, and since it gives other particles their mass, various Catholic-themed Higgs jokes have been circulating. In reality, the discovery of this boson has no obvious implications for theology. Indeed, if any particle were to be called the ‘God particle,’ the photon, the particle of light, would probably be a far stronger candidate. Nevertheless, since this discovery is a major milestone it is worth reviewing its implications for the human quest to understand life, the universe and everything.

The Higgs mechanism was first predicted by Peter Higgs at the University of Edinburgh in 1964, although several others, including Yoichiro Nambu, Robert Brout and François Englert contributed to the idea of an invisible field through space that gives other particles their mass. Explaining how this Higgs field gives mass is not easy, but the most straightforward metaphor is that it acts like a treacle, resisting changes in velocity and making it necessary to apply a force to accelerate a particle. This resistance is one of the contributing factors to the inertia of more familiar objects. One everyday consequence is that we need to burn a good deal of fuel to accelerate a car and then need to apply brakes, dissipating the energy, to bring the car to a halt. This ‘stickiness’ to acceleration is indirectly (though not exclusively) a result of the Higgs field.

The existence of the Higgs field has long been appealing because it helps to solve certain problems while preserving underlying symmetries, a principle guided ultimately by a belief in the order of the cosmos. Until recently, however, although we had seen its effects we had never detected the ‘treacle’ itself. In particle physics, a field is associated with a particle, so detecting the Higgs field required finding evidence of its particle, the ‘Higgs boson,’ but this has not proved easy. The boson is extremely heavy in particle terms, about 130 times the mass of the proton, which means that an extraordinary concentration of energy is needed to allow the particle to form. Two earlier accelerators, the Tevatron and the Large Electron Positron Collider (LEP), on which I worked with a team from Oxford University, were able to narrow down the search. Only with the completion of the Large Hadron Collider, however, a behemoth 17 miles in circumference colliding beams of protons at up to 4 teraelectronvolts, has it been possible to find direct evidence of the boson. Nevertheless, the task of sifting the data to find Higgs candidates has still proved extremely challenging. Rolf-Dieter Heuer, the Director General of CERN, has compared the task to finding a few individual grains in a swimming pool full of sand. In fact, although the scientists have found something, they cannot yet be quite certain that it is the Higgs until further data are collected, although the prospects are good.

So what are the implications of discovering this elusive particle? People often ask how a scientific breakthrough will be useful, so it worth stating that finding the Higgs may have no practical value whatsoever. Past experience suggests that discoveries in physics frequently do impact on human life, as anyone who uses a computer or benefits from X-rays can testify. Nevertheless, finding the Higgs may turn out to be no more ‘useful’ than a Fra Angelico painting or a Michelangelo sculpture. We undertake this research to fulfill one of the most noble human aspirations: to know the causes of things. Moreover, although the Higgs is a piece of the puzzle of how (not why) the universe works, it is scarcely a final answer. For example, we have not explained the peculiar mass values of elementary particles or the many so-called ‘fine-tuning’ problems. The universe seems balanced on an unimaginably thin ‘knife-edge’ of possibilities, with tiny changes in apparently arbitrary parameters making our existence impossible.

Setting such ongoing problems aside, are there any Catholic and specifically Jesuit aspects to the story of the Higgs boson? Science is an inherently collaborative process, with each breakthrough often drawing on the accumulated work of centuries. Yet there are at least three important Catholic contributions to the history behind the Higgs. First, the Big Bang theory, which links the Higgs discovery to models of the early evolution of the universe, was devised by a Catholic priest, Fr Georges Lemaître. Second, a precursor of field theory can be traced back, by means of Michael Faraday, to the Jesuit priest Ruđer Josip Bošković (Roger Boscovich) and his Theory of Natural Philosophy (1758). Although little known in the Anglo-Saxon world, Fr Bošković’s many contributions to science in general, and especially to the modern conception of matter in physics, were staggeringly prescient. The descriptions and diagrams of his work of 1758 resemble those of a modern physics textbook. In particular, he held that physical bodies could not be composed of continuous material, or even of contiguous material particles, but of innumerable point-like structures lacking extension and divisibility. This model of matter in terms of point-like particles, repelling one another with forces that tend to become infinite in very close proximity but attractive at a distance, has become the standard approach to understanding matter in particle physics. John Barrow (New Theories of Everything [Gifford Lectures] [OUP, 2007]) has recently helped to rectify the injustice with which Fr Bošković’s pioneering contributions have been overlooked. Third, another Jesuit priest, Theodore Wulf, was one of the pioneers of early work on cosmic rays, which helped to give birth to particle physics.

Although all these developments are now taken for granted, it is often forgotten that as late as 1948 the Big Bang theory was attacked in the Soviet Union, the world’s first atheist state, on the basis that support for this theory would encourage ‘clericalism.’ These facts should give some pause for thought for those who believe that atheism is the natural ally of a scientific worldview, or that a life of faith somehow impedes one’s ability to think scientifically. Indeed, as James Hannam has argued in God’s Philosophers: How the Medieval World Laid the Foundations of Modern Science (Icon, 2009), a strong case can be made that the Catholic faith and, I would add, the cultural formation drawn from its Jewish roots, have shaped human imagination and institutions, such as universities, in ways that have proved remarkably fruitful for the development of science.

This possible connection between science and faith raises a question mark over the future in the light of a decline in Christian faith in parts of the world today. In the history of art, we have seen how the portrayal of nature has gradually collapsed from beauty and order into chaos and brutality as the great themes of Christian grace have been marginalized. In science, most discoveries today are on the basis of theories formed decades or even centuries ago, and it is not yet clear how to make further progress in many areas. So although the discovery of the Higgs is a extraordinary technical achievement, I think it is premature to say yet whether this breakthrough signals a true renaissance or a kind of swansong from a civilisation that is losing its heart.

Fr Andrew Pinsent was formerly a particle physicist working on the DELPHI experiment at CERN. Today he is a priest of Arundel and Brighton diocese and Research Director of the Ian Ramsey Centre for Science and Religion in the Theology Faculty of Oxford University.

This article first appeared in the Catholic Herald and is re-printed here with minor modifications, by kind permission.

Can God and Evolution Co-exist?