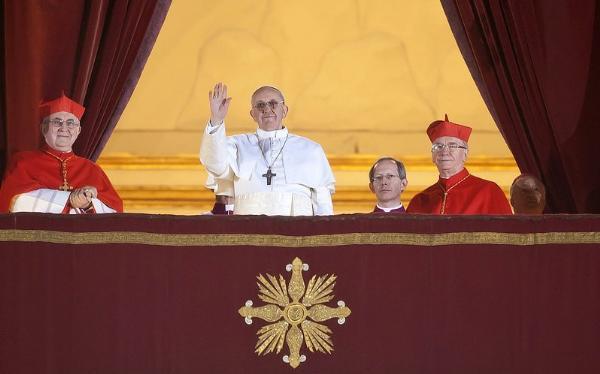 On Pope Francis’ second full day as Bishop of Rome, Fr Nicholas King SJ reacts with surprise and welcome to the unprecedented election of a Jesuit pope. The Catholic Church is just getting to know Jorge Mario Bergoglio, the former Archbishop of Buenos Aires – where can we find hope for what his papacy might bring in what we know about him already?

It has been an extraordinary few weeks in the life of the Catholic Church, from the almost-unheard-of resignation of a Bishop of Rome to the totally-unheard-of election, accomplished with quite remarkable rapidity, of a Jesuit as his successor. It may be helpful to readers to explain that the Jesuits (‘Society of Jesus’) is a religious order founded in the 16th century, whose members were forbidden to accept high office in the Church (unless commanded by the pope). The reason for that was that in those days, when reform was urgently needed in the Church, to be a bishop was a gateway to wealth and power, and our founder, Ignatius Loyola, was very aware of the temptations that money and power could bring. Perhaps at the present critical juncture in the history of the Church we need just such a pope as the one who has taken the name of Francis, after that other great reformer, from Assisi.

So are the Jesuits exulting at this turn of events? I have to say that they are not; listening to my brethren over breakfast and at supper, not to mention what I have heard them saying on the radio and the television, they are as astonished as the rest of the world, and not very much more knowledgeable, about the new pope. There is also detectable a certain reserve, a sense that it is not quite the sort of thing that Jesuits should do. Non-Jesuits, by contrast, have been full of congratulations in the telephone messages and e-mails that have flooded us during these few hours.

However, like the rest of the human race, Jesuits are showing a good deal of enthusiasm at the election of this particular man; and they point to his humility, and the frequently-repeated and undeniably impressive facts that he flies economy class, even across the Atlantic, lives on his own, not in a palace but in an apartment, and that he cooks for himself. And we share, I think, the sentiment to which many people have given utterance, that it is ‘a breath of fresh air’: his evident prayerfulness, his request to the crowds in St Peter’s Square to pray for God’s blessing on him, the impressive simplicity of his style, and, perhaps above all, his devotion to the poor. Inevitably some people ask whether he is a ‘conservative’ or a ‘progressive’. These are unhelpful labels, beloved of lazy commentators; each of them represents an admirable quality, but they tend to be used only as unreflective boo- or hurrah-words, rather than describing any sensible reality in the Church today.

As a Jesuit, I notice that he is of working-class stock; that he was appointed Provincial Superior in Argentina at the very young age of 37, having been a priest for only four years; and that his time as Provincial was during those very difficult years of the 1970’s, when the Church and the Society of Jesus were grappling with the implications of the Second Vatican Council, and many Jesuits were leaving to get married. It was also, politically, a painfully difficult moment in the history of Argentina. So he must have learned some hard lessons about dealing with division and crisis in the Church. Secondly, it means that he will have had the experience of making the 30-day silent retreat, known as the Spiritual Exercises, at least twice in his life, and an 8-day version each year. That should ideally mean that he is a man of deep prayer, which is indeed the impression that he has radiated to the world. Thirdly, he is a man used to living in community, even if for the last 20 years he has been living the solitary life of a bishop. Fourthly, that very experience of being a bishop will have given him the important pastoral experience of listening to what people are saying; and his first public appearances suggests that he has the gift, so sorely needed in the Church, of being able to ‘talk human’. It is also of immense significance that as a bishop he washed and kissed the feet of sufferers from HIV/AIDS.

Finally, and best of all, I observe from all over the world an extraordinary upsurge of optimism about the Church in its present (admittedly tricky) situation; several people, including one very senior religious sister, have said to me, by e-mail or telephone or in conversation, that they are feeling better about the Church than they have done for years. This is a very good indicator of the presence of the Holy Spirit.

Anyone who tries to predict what shape Francis’ papacy is going to take is bound (like all those who so confidently predicted the outcome of the conclave) to end up looking stupid, so I am not going to do that. The best thing about the present moment is that it does not feel like a victory for this party or that; instead it has the fresh and joyful unexpectedness that is the sign that the Holy Spirit has been at work. Let me conclude, therefore, by simply asking for the prayers of all readers, not just Catholic, nor just Christian, for the new adventure on which we are beginning. And even if you think that you may be atheist, I would still ask that you spare a thought for Francis I. We live in a world that is very closely linked, and the Bishop of Rome can influence that world very much for the better, if he will listen to the voice of God and to the voice of the poor. This is a very happy day for us all.

This is an edited version of an article also appearing in the 15 March 2013 edition of the South African newspaper, The Witness.

The Politics of Papal Visits