Skip to main content
Photo by Christus Vincit at flickr.com 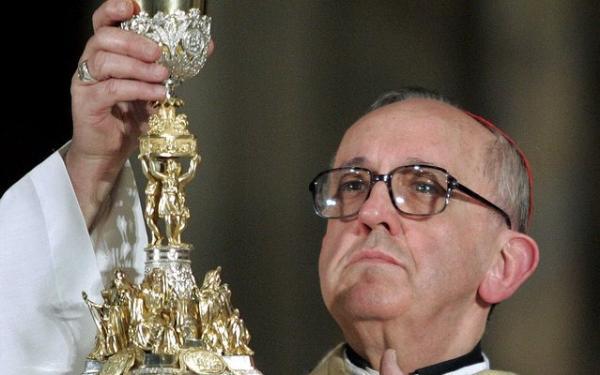 In a contribution to a series from the Jesuit Institute South Africa on the election of Pope Francis, Chris Chatteris SJ offers some thoughts on Fr Jorge Mario Bergoglio’s time as Provincial Superior of the Jesuits in Argentina. Fr Chatteris’ own experience of South Africa’s recent history has given him a unique perspective on the acute difficulties and confusions that arise in such troubled circumstances.

No one could be more surprised at the choice of a 76-year-old Jesuit pope than the Jesuit penning this piece.

Although Jesuits have sometimes been lampooned as unthinking and unfeeling automata in the papal service (‘the horns of the Papal bull’ or ‘the Pope’s SAS’) and even though Jesuits do take a vow of obedience to accept the missions mandated by him, history shows that the relationship between Jesuits and pope has often been a rocky one. In the 18th century, as dramatised by Jeremy Irons and Robert de Niro in the film The Mission, Pope Clement XIV went as far as suppressing the Jesuit order. It was this tricky history that gave rise to the received wisdom that there would never be a Jesuit pope.

But now there is – and an aspect of that which keeps coming up in the press is Pope Francis’ experience when he was head of the Jesuits (‘Provincial Superior’) in Argentina in the late 1970s.

The 40-year-old Fr Bergoglio had to face the frightening, hard power of military repression in his country. The Junta that ruled Argentina at the time was running a ‘Dirty War’ with people being killed, tortured or just ‘disappeared’. Pope Francis has been criticised for not being more forthright in his condemnation of the Junta and for his handling of the case of two Jesuits who were kidnapped and tortured.

Such criticisms plunged my thoughts back to the late eighties and early nineties here in South Africa where we had our own ‘dirty war’ in the run up to the elections of 1994. I happened to be based in one of the epicentres of this violence in rural KwaZulu-Natal, and later got a wider view of it as the Regional Superior from 1992 to 1998. I like to think my generation know something of what Francis went through then.

You are young, inexperienced, and burdened with a heavy responsibility at a dangerous time. Today we understand better what was happening, but then it was often utterly confusing. You march for the truth and non-violence but such a stance seems almost irrelevant as the struggle deteriorates into a welter of killing and ‘political cleansing’. You struggle to keep your feet.

A major preoccupation is to prevent casualties among your Jesuit companions. You call this prudence but you wonder whether the situation demands something more forthright. You are acutely aware that, as a priest, you are in less danger than the ordinary people but that your public stance can place them in mortal danger. There are disagreements among your advisors and you do not have the hindsight with which to make perfect decisions, and so you make some mistakes. But you acknowledge these and hope that people will understand.

Some will; some won’t. There are some for whom even if Francis was the very incarnation of Francis of Assisi, that would still not be good enough. Hopefully most people will be grateful that he’s human and fallible. St Paul reminds us that the gospel is carried by us, mere ‘earthen vessels’. For Christian believers the election of Pope Francis is a vivid sign of the times, and what God seems to me to be saying through it is: ‘It’s the Gospel, stupid!’

This article was published originally by the Jesuit Institute South Africa. For more reflections on the election of Pope Francis, please visit http://www.jesuitinstitute.org.za/.

Can Jesus raise our hope from the dead?

Horizons beyond walls: Pope Francis in the Holy Land