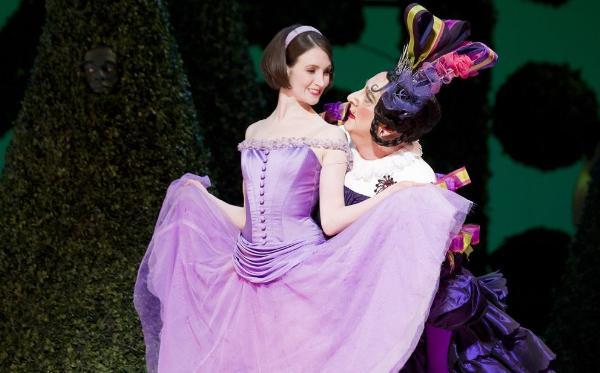 The Royal Ballet’s production of Alice’s Adventures in Wonderland concludes its run at the Royal Opera House this weekend. Quentin de la Bédoyère reviews choreographer Christopher Wheeldon’s take on the familiar narrative and ponders the perennial appeal of this curious story.

What is it about Alice in Wonderland? At a point, around seventy years ago, it was imprinted on my mind, and there it remains. And I am not alone. It would seem that in some way it speaks significantly to the child who continues to live within all of us. This is not a generational thing, for three of my (young adult) grandsons turned out to know Alice well – although their most recent meeting was through a film I had not seen. Nor, they assured me, was this a middle class thing: Alice apparently remains in the patrimony of the English mind.

A universal reaction invites some kind of psychological explanation. And indeed, in the matter of fairy tales, Freud, Jung and Bettelheim can be plausibly, if sometimes gratuitously, invoked. In the end, the grandsons settled for the characteristics of dream sequences, and the need to cope with the uncertainties of early puberty. Interestingly, they put some weight on the masculine fear of female power, and the eldest grandson – who knows such things – gave us a disquisition on the power of the female in primitive religions. This was later supplemented by a granddaughter who gave me a quick run-down on transsexuality and female threat in Thailand. I would have settled for the Wicked Witch of the West, but, in a kind of Wonderland reversal of order, I see that I must now be educated by my grandchildren. Was it significant that, in this case, the boys did not relate the threat to the Red Queen but to mistressy Alice herself, a female of half their age? Oh yes, I know what they mean.

My renewed acquaintance with Alice was more recent. I attended the Royal Ballet’s production of Alice’s Adventures in Wonderland, choreographed by Christopher Wheeldon, with music by Joby Talbot and conducted by David Briskin. This was a live transmission to my local Odeon, no more than a few minutes’ bus ride from my house. Once upon a time, when I regarded Covent Garden as a second home, I would have been snooty about such a poor man’s substitute for the real thing; but I have to say that age, illness and the recession now makes it very acceptable. And with the package comes useful on-screen discussion of the artistic intentions of the production.

Alice in ballet is a multi-storied form of art. First you have the human experience of the real little girl, Alice Liddell, coping uncertainly with the beginnings of adult feelings. Then there is the conversion, the selection and the inventiveness of the Carroll story which, in losing its literalness, points beyond itself, as all art must do. And now you have yet another layer, where the whole appears to escape gravity and is expressed without words in music and dance. What does a balletic Alice offer?

First and foremost: entertainment. Playing for a little over two hours, plus two intervals, it is a heady sequence of dancing vignettes which left me wondering what further ingenuity could follow the last, or in what way a dancing body could be pushed to further extremes. Only very occasionally did I feel that the odd scene could have been omitted or shortened, but I hesitate to say so as I hear Alice in my head asking: ‘And what about the even scene?’

Of course verbal nonsense is not a feature here so we have to exchange, for instance, debate about whether it is possible to behead a cat which has no body for a cat which dismantles itself continuously without ever losing its identity. And there is the absurdity of Alice (Sarah Lamb) herself. You see, she defies the laws of physics by being weightless. I suppose there must be sensitive scales somewhere which would at least flicker at her footfall but as far as I could see she floated.

Steven McRae was the Mad Hatter. This distinguished soloist, sometimes compared to Baryshnikov, just happens also to be a genius at tap dance. You might not have thought that tap and a formal ballet score would meld but this production gave a new meaning to counterpoint. The sleeping tap dancer, who lives in my head but refuses to inform my feet, immediately woke up.

I had not formerly associated the ripples of the Caterpillar with the appeal of sensuality, but Eric Underwood played it for this, as he explained to us during an interval: ‘Definitely one for the ladies to enjoy’. I did not check out what success he had. And the response of the audience to Zanaida Yanowsky’s Red Queen was a recognition of her tour de force – a teetering pastiche of the inelegant dancer.

I find it hard to discern the extent to which my memories of Alice fed into my understanding of the production, but I have no doubt that the ballet form works at its own level. Dance is a root form of the expression and communication of emotion. Non-verbal communication is the only the native language which we all share. I am a clumsy exponent of dance, but I can admire the transformation which takes over a true hoofer’s body when the music begins.

You did not dance with me but danced alone
To serpentine a path around my lust
Insinuate to pulverise my bone
And mingle me with John and Herod's dust.[1]

Dance suits well the interpretation of Alice as the experience of dream. For many dreamers the characters act rather than speak; or the words, if they do speak, are almost immediately forgotten. Connections and contrasts – logical, coincidental, jocular or nonsensical – can all be handled naturally in music. It only remains, if we are to take Freud’s word, to suss out the conflicts which Alice, or Alice’s creator, was trying to resolve. But I see no reason to suppose that ambivalence towards pre-pubescent females should lead to the sort of interpretation we see so readily today. As a man with many daughters, granddaughters and even a great granddaughter, I think they are one of God’s better ideas.

I suspect that we all have our personal links to Alice. In my case it is a cotoneaster tree outside my window sired some thirty years ago by a cutting from Dodgson’s[2] sister’s garden in Guildford, where in fact he died. I regard it as a proxy for his immortality. But if the number of Alices present in the audience when the lights went up is any guide, his immortality needs no help from me.

Quentin de la Bédoyère is Science Editor for the Catholic Herald and author of Autonomy and Obedience in the Catholic Church (T&T Clark, 2002). His personal website can be found at: http://www.quentindelabedoyere.com .

[2] Lewis Carroll was the pseudonym under which Charles Lutwidge Dodson wrote Alice’s Adventures in Wonderland.

Alice’s Adventures in Wonderland at the Royal Opera House