Skip to main content
Photo by Mazur/catholicnews.org.uk at flickr.com 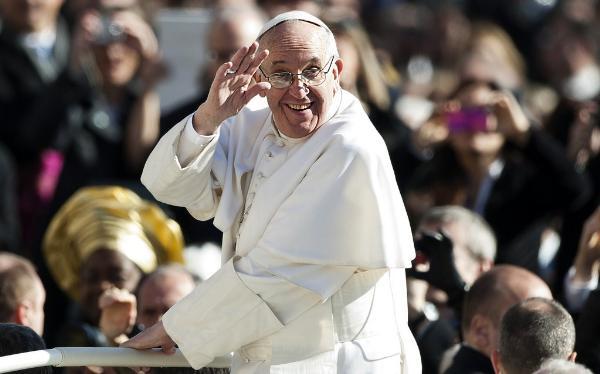 In the month since Jorge Mario Bergoglio’s fellow cardinals elected him to the papacy, he has already made quite an impression on Catholics and others all over the world. But his words and actions as Archbishop of Buenos Aires also give us many clues about his vision for the Church. John Moffatt SJ encourages us to recognise the theology in Pope Francis’ actions.

‘Buona sera’ (‘good evening’) does not sound a very holy way to begin your work as a religious leader, but it gives an important hint about the new Pope’s understanding of God and the world.

Although Jorge Mario Bergoglio studied and taught theology and philosophy, he has (unlike his immediate predecessors) written no books. So if we want to find out what is important in his thinking, we have to turn to his sermons or interviews – and we have to recognise the theology in his actions.

This was clear from the very moment the new pope stepped on to the balcony. The first thing he saw was a sea of faces: the men, women and children who had waited patiently in the cold and rain to greet him. Popes, bishops, priests and religious only exist because of them. They are the ones who matter most. These are the people of the gospel gathered (in Francis’ own words) ‘with an open heart, needing the word of God.’ The Pope’s ‘good evening!’ is light-hearted, human and holy, acknowledging the friends of Christ. He asks for their blessing and they give meaning to his own.

We have heard how he encouraged his priests to get out of their presbyteries and talk to people. On the internet we have seen him sitting on the underground train chatting to his neighbour. This is a man for whom following Christ means actively meeting those for whom Christ died, whether Christian or Jew, agnostic or believer.

More than anything, though, we hear him challenging himself and us to recognise Christ in the face of the poor and the marginalised – and to act.

In his Lent sermon in 2009 he invites the congregation to notice the beggars crowding the streets. He reminds them with the words of scripture ‘to break their bread with the hungry and shelter the homeless poor’. It is generous sharing that gives meaning to our Lenten Fast.

In his 2010 interviews he talks about terrible, structural economic injustices, soul-destroying social collapse, internecine wars, and the degradation of the environment. He suggests these can only be overcome if we all discover a new way of living together: to reach out with generosity, compassion and forgiveness. For Christians, the reason why we must do this is simple. It is the gift we have ourselves received from God.

This sense of gift comes from deep personal experience. One day in confession, the young Jorge Mario received spiritual guidance for the first time. Suddenly he experienced personally God’s grace and mercy. In time he realised that God was calling him to be a priest. That experience of receiving mercy and of then being chosen is captured in his motto, miserando et eligendo, ‘filled with compassion, and choosing’, which describes the gaze of Jesus on Matthew the tax-collector.

As a Jesuit, he has twice experienced the Spiritual Exercises of St Ignatius of Loyola. These begin by awakening awareness of being a sinner yet forgiven. We are then invited to share the loving gaze of God, Father, Son and Spirit, on a sea of faces, reflecting the joys and sorrows, the goodness and brutality of the world. We see the Son entering the world as one of us, ‘not to condemn the world, but so that through him, the world might be saved.’

Here we can recognise the centre-point of Francis’ practical theology. Jesus brings the mercy of God to our streets, reaching out to the poor and marginalised, challenging the self-righteous and giving his life to set us free. Jesus then turns to us, as he turned to Matthew the tax collector, and Jorge Mario the lab technician, and says simply, ‘follow me.’

In his first Angelus and Sunday homily, Pope Francis contemplated Jesus’s mercy and his challenge to the self-righteous in the gospel of the woman caught in adultery. But the gentleness of Francis’ pastoral style contrasts with the combative way he has sometimes taken on government and courts back in Argentina. There he has spoken out fiercely on issues concerning poverty, legalising abortion and most recently (and unsuccessfully) gay civil marriage.

One problem with this style of church teaching is that it can seem to encourage the easy, self-righteous separation of the publicly ‘good’ from the publicly ‘bad’ (exactly what the gospel reading challenges). It can also support an impression that the Church looks inward, jealously protecting its rights in a constant battle with an ‘evil’ secular world.

So what tenderness can we expect from the new Pope for Catholics who are on the wrong side of the official laws? And what hope is there for dialogue with a world of people who think differently from us? We can turn again to Jorge Mario Bergoglio’s interviews of 2010 for clues.

He is firmly committed to the Church’s teaching on human sexuality and family. He regards this as something that any ethical person can recognise as valid, whether they are Catholic or not. However, he also puts it in a wider context. The Church’s teaching on the right to life – defending the unborn – must include the right of the mother to care during and after pregnancy; the right of mother and child to food, water, sanitation, education; the right of the mother to human care in old age. In other words, it implies a whole way of being community. The implication is that, unless the Church is prepared to promote these things, its defence of the rights of the unborn is hollow. He further speaks of the need for great compassion for women affected by abortion and is strong in condemning priests who show disrespect to unmarried mothers.

He also gives a sense of proportion when talking about other matters of human sexuality. He maintains that the reason for the Church’s rules is that it believes they promote a fuller and happier life. He criticises the way some church people too easily reduce church teaching to rules of sexual behaviour, rather than the gospel and the mercy of God. When his interviewers begin asking him about whether it is time to recognise that people think differently these days, he turns their attention to other things that people take for granted, like not paying their taxes or cheating in business. The implication is twofold. Firstly, some things are simply wrong however many people accept them. Secondly, some of the things that people do not even see as wrong do far more damage to society than some of the hot topics around sexual ethics.

He is a man who knows his own mind and he does not believe that ethics changes. But this does not mean that he does not believe in the progress of civilisation or that he thinks our ethical awareness cannot grow. On the negative side, he points to the pitfalls of progress, when advanced technology drives out humanity and undermines civilisation. Yet, positively, he points to the abolition of slavery, the establishment of human rights, awareness of ecological responsibilities. These are areas where we have learnt to see real ethical imperatives more clearly. He notes that the Church has done such learning in the past, for instance in changing its teaching on the death penalty. By implication it can do such learning in the future.

His vision of the place of Church in society is not that of a closed fortress. ‘A Church wrapped up in itself… makes itself paranoid, autistic’. The Church needs to get out of itself, engage with people, even if that means taking risks. Its task is to help society grow together, to become more committed, more human. Its partners in dialogue are whoever has a sense of the transcendent. This may mean believing in God, or it may mean believing in the value of other human beings. All who share this horizon of value can meet, converse, reconcile and build together a better world.

John Moffatt SJ teaches Scripture at the Jesuit Institute, South Africa and is the author of the blog Letting the Porcupine out of the Bottle.

This article was published originally by the Jesuit Institute South Africa. For more reflections on the election of Pope Francis, please visit http://www.jesuitinstitute.org.za/.

Letting the Porcupine out of the Bottle

Pope Francis in the Holy Land: A pilgrimage of prayer

A time of choosing: Conversion and discernment in the mind of Pope Francis