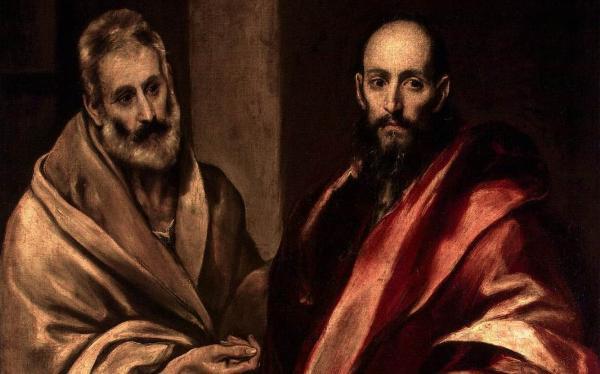 29 June is the Solemnity of Saints Peter and Paul. Both were men of great faith and influence, but they had very different understandings of the Messiah to whom they dedicated their lives, as John Twist SJ explains.

In general, each saint has his or her own feast day: where a whole block of saints share a feast it is usually through having a common fate, such a being martyred as a group. But that Peter and Paul are always tied with one another and have their common feast on 29 June is especially surprising, because it would be difficult to find two more different personalities than those of Peter and Paul.

Peter very much belonged to the heartland of the Israelite faith. The twelve tribes had been given a ‘land flowing with milk and honey’ to be their possession. In that land they would be at peace, they would prosper and they would have the privilege of the divine presence dwelling in the Temple in Jerusalem. And if ever there was a land flowing with milk and honey, it was surely Galilee, the area in which Peter lived. Rich, fertile land, an inland sea teeming with fish, idyllic scenery: this was the environment that Peter enjoyed, and in which he had met Jesus, the man who told him, ‘I will make you a fisher of men’.

Paul, on the other hand, was part of the Jewish dispersion. Since their exile by the Babylonians, Jewish people had begun to live outside the Promised Land, and as time went on they had positively opted to live in the great cities of the Middle East and Mediterranean. Thus by the time that Jesus lived, vast numbers of Jews resided outside the Holy Land. Paul, therefore, was very familiar with the Greek and Roman cultures that would have seemed strange to Peter the fisherman.

The difference in background may well have been one of the factors that led the two great apostles to have sharply different understandings of the Messiah in whom they believed. Whilst Peter did come to realise that the Good News was for all nations, his heart remained in Galilee, and he was more at ease with old ways and traditions with which he was familiar. Paul, however, seized on the radical implications of the gospel as a gift to all peoples, an act of God to break down barriers between nations, cultures, languages and subgroups, and thus bring about one giant human family of which God was the father. This led to a strong clash between the two personalities, but this proved to be constructive and fruitful.

It is believed that the two great apostles were both martyred in Rome: Paul executed with a sword as a Roman citizen; Peter crucified upside down in imitation of his friend, Jesus. There can be little doubt that Paul was the more influential figure, with his letters forming a major part of the New Testament; Paul was the great theoretician of Christianity. But it is Peter who is more warmly embraced. Here is a very human figure, with real defects but great generosity; a man all of us can not merely admire, but to a degree can hope to imitate. Paul’s thoughts have left their mark on Christianity, but it is Peter’s personality that has moved Christian hearts.

‘The Solemnity of Peter and Paul’ by Peter Edmonds SJ