Skip to main content
Photo by C4Chaos at flickr.com 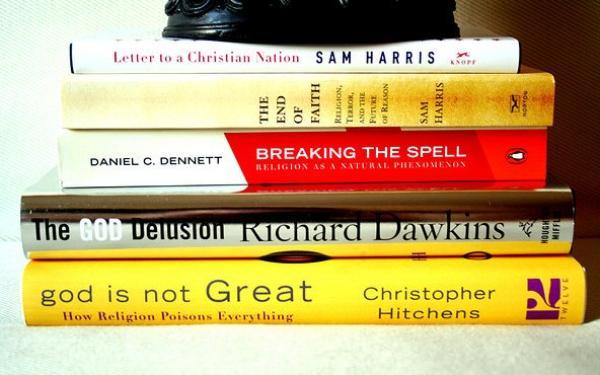 Have you put your religious beliefs to the test at ‘Battleground God’? Philosopher Martin Pickup did just that, but he did not come away victorious. He describes how the simplification of discussions about religion can lead to a combative relationship between atheists and believers.

You have to be careful on the internet; it can be a dangerous place. If you go to http://www.philosophersnet.com/games/god.php you will be arriving at ‘Battleground God’, the sensationally-named quiz where the logical consistency of your religious beliefs is tested. If you say something inconsistent, you take a ‘direct hit’. If you say something uncomfortable, you ‘bite a bullet’.

Let me tell you a little more about it. You are presented with a series of statements, and you have to say whether each is true or false. There are 17 statements, such as the following: ‘Any being which it is right to call God must have the power to do anything’. So: true or false? On the basis of your 17 answers, your rational consistency is evaluated. You can earn medals if you do well. I did not get a medal.

I do not want to sound bitter about my lack of medals, but I did not like this website. There are good philosophical arguments against God’s existence (just as there are good arguments for God’s existence). This game does not demonstrate any of them. A number of its statements play on ambiguity. For example: ‘It is justifiable to base one's beliefs about the external world on a firm, inner conviction, regardless of the external evidence, or lack of it, for the truth or falsity of these convictions.’ If we answer ‘true’, then we get caught by examples of delusions. For instance, someone might have a firm, inner conviction that the Jesuits sank the Titanic, or that all cheese is secretly communicating with aliens. But if we answer ‘false’, then religious belief cannot justifiably be based solely on firm, inner conviction. Surely the right response to such a statement is more complex than ‘true’ or ‘false’.

Aside from the philosophical flaws in its particulars – I will not go through all of my difficulties, as almost every conclusion it draws seems at least questionable to me – the quiz seems to me to be a gross simplification in almost every respect. In fairness to the author(s), you can find disclaimers and FAQs that are more sophisticated and soften the claims made in the quiz itself. It is not purely an anti-religious quiz, as there are difficulties presented with certain atheistic approaches, but the scales are clearly balanced in one direction. Of course, this kind of simplicity is hardly restricted to the atheist camp of the religion debate – see the painfully analogous, and even worse, http://www.proofthatgodexists.org/. If you ever doubt the existence of God (or, indeed, if you always do) this should set your doubts to rest! But the quiz prompted me to reflect on a wider issue: it is just one example of an approach to philosophy of religion that is unhelpful at best, but inaccurate and damaging at its worst.

The level of public debate about religion, as represented by this sort of simplistic point-scoring, is depressingly low, and I am starting to find it rather frustrating. I am frustrated because the game offers a number of false dichotomies that are uninformed by centuries of work on important questions in the philosophy of religion. I am frustrated because logic is being paraded as an objective tool for determining the consistency of religious beliefs (which it indeed can be), but the ‘logic’ we are offered is patently flawed. Furthermore, the statements themselves are ignorant of the terminological complexity of what they are discussing. Intelligent people have thought about these questions for a long time – it is not as simple as a tick-box exercise.

I used to think that the Dawkins-esque criticism of religion on one side, along with a certain brand of Evangelical Christian literature on the other, were unsophisticated but perhaps useful. I thought: even if there are much better atheist philosophers and Christian philosophers than these, at least these popular proponents are promoting interest in the important questions in this area. Perhaps people will be encouraged to discover more and think about things for themselves, which can only be a good thing.

Unfortunately, I no longer think this. Table-thumping atheism, along with table-thumping theism, does not seem to prompt many people to careful consideration of the issues. Rather, it seems to encourage an aggressive, superior attitude to anyone who disagrees with its dogma. At times it seems that so-called rational argument and logic, as well as persuasive rhetoric and anything else we can get our hands on, become merely tools to be used to attack one’s opponents and recruit more foot-soldiers to the cause. I wonder whether people in opposing camps are really trying to talk to one another. Or are they simply trying to defeat one another? I worry that we have replaced dialogue with combat, hence the rise of the antagonistic settings of religion against atheism, or religion against science (a painfully false dichotomy).

And yet, even with this battleground mentality in discussions of religion in the public sphere, it seems as if almost everyone is preaching to the choir. There is little attempt to reach across to one’s ‘opponents’, little attempt at building consensus or finding common goals. Part of this is natural: it is much safer to criticise, to undermine; it is comforting to think that people who do not see the self-evident truth of our position are dangerous idiots who are talking nonsense. In a context of combat, we should defeat our enemies by any means necessary – it’s them or us. But the language of warfare disguises intellectual cowardice.

The religious debate is being polarised. If the aim of the people who are engaged visibly in the discussion is simply to ‘win’, that way everyone surely loses. There are exceptions, of course, on both sides. But the overall direction seems encapsulated by the quiz I have discussed: we can award medals to those who agree with us and lambast the fools who disagree.

If this is the state of the discussion, what can we do about it? I think it begins with cultivating intellectual virtues: a respect for other views, and the people that hold them; a humility to realise that we are definitely wrong about something, probably wrong about a few things and might be wrong about everything; an openness to really listen to others and the confidence to take on board the challenge that they present; a desire for the truth rather than a desire simply to convince; a recognition that intelligent, thoughtful and good people disagree about these things and that the answer is not certain and certainly not obvious; the wisdom to realise that intellectual maturity is shown by patience, not aggression. Above all, I think we need the bravery to dare to believe the following: if what I hold is true, then I have nothing to fear. And if it is not, I should change my mind.

Martin Pickup is the Salvesen Junior Fellow at New College, University of Oxford.

Why I am not an atheist