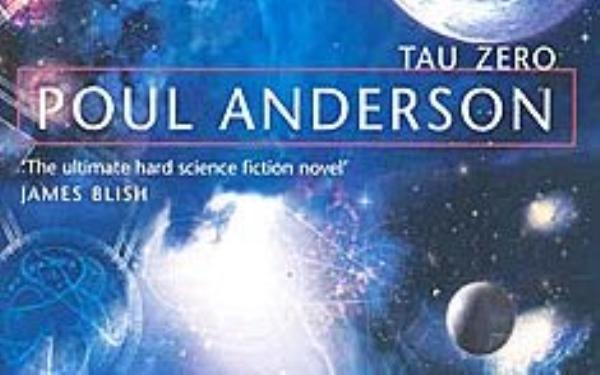 This week’s recommended reading comes from the science fiction genre. David Baird thinks that you really must read a little-known 1970 novel by Poul Anderson. ‘The soul of Tau Zero, in a phrase, is the quest of the Christian mystic, the archetypical adventurer.’ How does this tale of adventure affirm the desire at the heart of Christian faith?

I do not know whether the Buddha is said ever to have achieved even a temporary state of levitation, but if he had this would seem to be the natural expression of his philosophy. For it is the essence of Buddhism to become ever more detached from the things of this earth, foregoing its abundant fruits in an effort to avoid pricking any thorns. The rejection of gravity would be the final triumph of this Eastern wariness of the world, climbing an airy staircase past all clouds and into a numbing nothing which is the furthest distance from all stars.

Science fiction and fantasy literature have occasionally been the subject of a similar critique. Their conventional departure from ‘the real world’, whether by spaceship, portals or potions, is felt by some readers to be an insupportable exodus from life as we know it, a rejection of both the pleasures and pains of regular experience in favour of a wandering, indulgent and perhaps even perverse desire for escape.

Setting to one side Tolkien’s response to the charges of escapism – who are those most preoccupied with others escaping, but jailers? – there is a comparison which might shed a healthy glow upon the apparent pallor of the science fiction and fantasy genres, and that comparison is mysticism. In a materialist age, the habits of the mystic will always be felt to be an indulgence, even when this indulgence takes the form of asceticism. Yet the critical point of comparison here is this: that whatever else he is, the adventurer in a work of science fiction or fantasy is always and primarily a mystic, and more often than not an ascetical mystic.

For the adventurer is a man who sets off on a quest in search of a thing for which he has almost no evidence, aside from perhaps some dubious hearsay and a few strange stirrings in his heart. Which is as much to say, adventurers, insofar as they are actively adventuring, are perennially engaged in an unending succession of blind dates, and the greatest adventurers are those who know least and trust most to the type of evidence least valued in a materialist age. In this sense, a romance is the opposite of a science, even if, as in the case of science fiction, science happens to be sponsoring the event by supplying the stage dressings, actorly preoccupations, uproarious witticisms and so on.

The adventurer is also more often than not an ascetic because the very impulse which invites him to become what he is, is also one that asks him to leave his house, family, friends and fields. And yet there is all the difference in the world between the Eastern and Western ascetic: the Eastern ascetic renounces indefinitely whereas the Western ascetic renounces in the hope of gaining more. To return to the fantastical image above, the ascetic from the East seeks to go on levitating forever, ever higher and further afield from an illusory world of discomforts, whereas the ascetic from the West positively seeks the discomfort of a temporary levitation simply in order to plunge back down ever deeper into the fields of this earth like a burning comet, or like a schoolboy climbing a diving board only to cannonball back into the pool.

Another difference conveyed by this image, with all its connotations of summer and perfect sunshine, might be paraphrased thus: that the whole point of levitating, in the Western scheme, is levity. Practitioners of this model of askesis do not desire to escape gravity entirely, because they recognise the natural end of gravity, which is a return to levity. To put it another way, the whole point of grave and serious thinking, talking and carrying-on is one giant build-up to an ever more glorious comic splash. The Eastern model fails to see this foundational joke in the creation of all things.

To the interested reader, I recommend Poul Anderson’s Tau Zero, a work of science fiction that gets this grave cosmic comedy, the genre at its best. There is a spaceship, a mechanical mishap and a crew that plummets ever faster into space. As they approach the speed of light, in accordance with the physical laws laid out by Einstein, time outside the vessel rapidly speeds up until planet Earth fades in the rearview, stars cool and the universe itself looks headed for a crunch. This is what happens, but not at all what the novel is about. A few clicks around Wikipedia will tell about the material elements of the story; the aim here is to convey a sense of its soul.

And the soul of Tau Zero, in a phrase, is the quest of the Christian mystic, the archetypical adventurer who leaves the front door ajar in his hometown on a quest for the new Jerusalem. It is a tale of monkish spirituality with minimal trace of religion. It is a rocket-fuelled and adrenaline-powered flight of the alone to the Alone.

Referenced above was that ancient insight, which might be called the Great Commission for Adventure, whereby a man must leave house and home, father and mother, friends and all things familiar, to follow his true desire. But left unreferenced was its implication: every adventurer is, in the final reckoning, a gambler, and the greatest adventurer bets the farm. His asceticism and mysticism are both risks, and neither translates into that consuming romance whereby the very nature of a man’s existence transforms into a thrilling survival of adventure without what might be called a confidence, or faith, in desire. If adventurers are mystics and ascetics, not all ascetics are adventurers. A man may be avowedly irreligious, but he will always in his heart be either a Buddhist or a Christian.

To conclude, the difference between the two types of ascetic, and what has created the permanent possibility of adventurers among the children of the West, is the resolute affirmative answer, underlying all their native philosophy, to this ultimate question of desire. Yes, desire is worth preserving. Yes, desire speaks truth. Yes, desire is worth the risk. This might be called the existential fundamental of Western faith, and this is the sine qua non of adventure. If the central dilemma in Buddha’s asceticism, then, is how to perpetually cool the ever-reviving burn within the human spirit, the challenge of Christ’s asceticism is to keep alive natural loves until they are revived in an everlasting and unconsuming fire. Tau Zero, in a stretch of paradox, might be called the final word in this drama, writing within a tradition of adventures wherein an alpha is also an omega, and the finality of death sometimes means the transfiguration of everything. Risk reading this book, blasting ever further into an apparently directionless Unknown, and plunge even deeper into the heart of the West.

David Baird has received degrees in English Literature, Philosophy & Theology, and Theology, Imagination & the Arts. He has publications forthcoming in The Chesterton Review, Sehnsucht, and Perusta: The Finnish Theological Journal. He is currently a PhD candidate at the University of St Andrews researching the writings of G.K. Chesterton.