Skip to main content
From ‘The Immaculate Conception’ by Velazquez 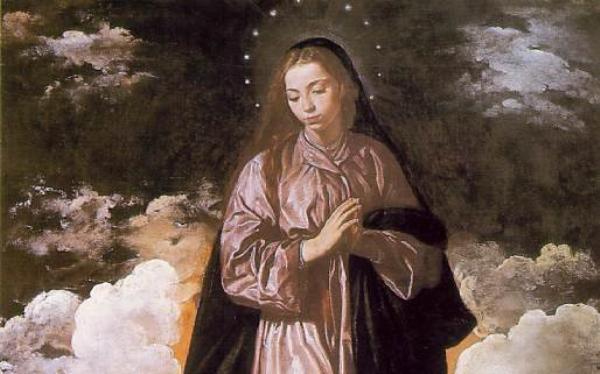 The Solemnity of the Immaculate Conception honours the doctrine that Mary was conceived without original sin.  Philip Endean SJ delves into the mystery at the heart of this feast. What questions does it pose about sin and the human condition, and can we answer these questions with theology?

In the early 1980s, the late and much loved Kevin Donovan SJ went part-time on the faculty at Heythrop College in order to become a parish priest in north London. The opening line of his first lecture after the move ran: ‘Now that I’m working in a parish, I’m coming to realise that theology is as important as candles.’

Just let that line sink in. It might mean that theology is trivial, a waste of time; it could be suggesting that theology at its best is an act of worship. The irony hints at how churchy activity of any kind is always dealing with far more than it can really handle. And yet the juxtaposition also jangles: life with candles and life with high theology, as in different ways both Kevin and his students were realising, do not quite fit together.

When we speak of Mary as conceived without original sin, we are using a theological idea—original sin—to name a reality of faith more naturally expressed by lighting a candle. And the theology does not quite work.

Look at Pius IX’s 1854 Apostolic Constitution, declaring that this long-established devotion was ‘a doctrine revealed by God and therefore to be believed firmly and constantly by all the faithful’. Pius begins by evoking ‘the lamentable wretchedness of the entire human race which would have resulted from the sin of Adam’.  Then he tells the gospel story of Christ becoming human, a member of that race.

Pius’s rhetorical skills—in ways that do not come through in the standard English translation—enable him to dodge talking directly about Jesus’s humanity, and indeed about Mary’s. What God prepares is referred to, not as a female of the human species, but as a  ‘Mother in whom the Son of God would become incarnate … ever absolutely free of all stain of sin, all fair and perfect’. Carefully, Pius and his officials are steering round what in plain language could only appear a contradiction: All humans are caught up in Adam’s sin; Mary is human; but Mary is not caught up in sin.

Typically, devotion to Mary is candle stuff: you do not ask too many questions. Whether articulated through sublimely beautiful expressions of high culture, or through more popular, even mawkish forms, it centres on feeling: ‘Lady, flow’r of everything’; ‘Virgin most pure, star of the sea/Pray for the wand’rer, pray for me.’ Such veneration goes back early in the Church, at least to the Council of Ephesus (431), which proclaimed Mary as the theotokos—‘god-bearer’. Then translation into Latin gave us something warmer and even more provocative: ‘mother of God’. Before we knew where we were, we were caught up in de Maria numquam satis: loosely, ‘nothing is too good for Mary’.

In Western Christianity at least, however, such Marian exuberance had to live alongside another strong tradition, one driven more by theory and the head. Shortly before the Council of Ephesus, and independently, St Augustine was reflecting on the scope of Christ’s saving work, and its relationship to our good behaviour. Starting from the practice of infant baptism, he developed a theology of original sin. This was a matter of logic: baptism is for the forgiveness of sins; we baptise babies; babies cannot actually sin; therefore babies—however much we want to coo at them—must be tainted by an inherited sin.

For Augustine, and many figures subsequently, original sin affected Mary like everyone else. Perhaps because the Augustinian teaching was so pessimistic about the general human condition without Christ’s grace, a counterbalancing impulse about goodness focused strongly on Mary. At any rate, officialdom only intervened when the tensions started causing problems.

Initially, these interventions were minimalist. In 1483, Sixtus IV noted that certain Dominicans, while accepting a liturgy centred on Mary’s conception, were claiming that it was heretical or sinful to claim that this conception was ‘without the stain of original sin’. Sixtus condemned this negative teaching, and encouraged belief in the Immaculate Conception. But significantly, he stopped short of a positive affirmation; the critics of the doctrine were merely showing ‘irresponsible boldness’ rather than being wrong. Sixtus was simply keeping options open: the matter had ‘not yet been decided by the Roman Church and the Apostolic See’. For its part, the Council of Trent, while reaffirming the effect of Adam’s sin on all humanity, declared ‘that it is not its intention to include in this decree dealing with original sin the Blessed and Immaculate Virgin Mary, Mother of God’. On both these occasions, the Church’s teaching office was recognising a logical problem and steering round it. And when Pius IX in 1854 finally declared the doctrine to be revealed by God, his fulsome rhetoric, as we have already noted, avoided being explicit on how the problem could be resolved. Maybe it was just a Vatican variant on the proverbial marginal note to sermons: ‘argument weak, shout louder’; maybe Pius, or one of his theologians, was pointing up subtly the need for further theological work. Such official codedness is an important skill of Church government.

Be all that as it may, Pius’s decision has been received and accepted, at least within Roman Catholicism. It seems somehow right that the early part of Advent should include a feast honouring Mary—even if journalists and some churchgoers become confused and think we are celebrating Jesus’s conception. The doctrine of original sin has become difficult, not just because of the contradictions between its main thrust and Mary’s freedom from it (to say nothing of Jesus’s), but also because of evolutionary theories, and a heightened sense of individual moral responsibility. Moreover, ecumenical and feminist concerns have tempered ultramontane Marian enthusiasms. Nevertheless, mainstream Catholics seem broadly comfortable with celebrating Mary’s creation. We look at the beautiful pictures; we hear the gospel of Mary’s receiving the angel’s message; and we quietly ignore the nagging questions arising about genetics. We light the candles anyway, and set the theology aside.

Perhaps naming issues such as these is as much as an article like this can sensibly do. The Church’s awareness of the mystery it embodies is, after all, a work in progress. Maybe all we can say is that celebrating Mary’s Immaculate Conception is a matter of collective instinct that we do not fully understand.

Indeed so. Equally, however, we should not be content with such a complacent strategy unless we really have no alternative. As far as possible, we should be able to give an account of our hope, both to our own integrity and to those who ask us. So let us try.

What do we in fact mean by ‘original sin’? Chesterton in his Orthodoxy famously and waggishly claimed original sin to be ‘the only part of Christian theology which can really be proved’. Sin was a fact, ‘a fact as practical as potatoes.’ What needed argument was whether or not we could be ‘washed in miraculous waters’, whether we could move beyond the Christian denial of ‘the present union between God and man’. There was no doubt that humanity ‘wanted washing’.

Confronting Chesterton is a risky, indeed churlish business. Nevertheless he is stating as an obvious fact something which is far from being so. For the fact which really is ‘as plain as potatoes’ is simply that life is often unsatisfactory. But self-evident mess falls far short of the Christian mystery of sin. By calling the mess ‘sin’, we are making a statement of faith and hope: a statement that the mess, all too real though it is, does not thwart God’s purpose. God can deal with it. And this means we can let go of other ways of coping with the mess: blaming ourselves, scapegoating others, compulsive virtue, cynicism, or whatever.

When most of us cradle Christians first learnt the word ‘sin’, it was probably in the context of our being naughty children. Not only had we done something wrong, done damage, upset Mum; we had committed a sin, we had offended God, and we needed to put things right with Him. For all the familiarity here, nothing particularly Christian is yet being said. Human cultures typically use God-language as a sanction mechanism, an emotional blackmail making us feel awful when we do not conform. Very easily the guilt feeling lose contact with objective right and wrong. A certain sort of Catholicism was very good at this, obsessing about doubtful issues of sexual morality, and remaining blind to major issues of truth and justice. As a wise woman once told me, ‘Catholics know a great deal about guilt, and very little about sin’.

The Christian mystery of sin centres, not on questions of moral right and wrong, but on something else: the outrageous faith and hope that God can somehow put the mess right. Thus, any theologically proper move from mess to sin opens up a perspective of hope. We cannot sensibly talk about original sin at all unless we are prepared to imagine life without it. And it is that reality, at least in its beginnings, which the gospel sets before us. ‘Original sin’ makes no sense unless there is a yet more original grace.

Our standard formula, ‘Mary conceived without original sin’ presents Mary in logically negative terms, as someone without a problem. It starts from our difficulties, and takes them as a fixed basis from which we can explore holiness as an exceptional absence. There is, of course, a place for such thinking. Equally, Christianity has gone wrong if such thinking is all we have. For Christianity is about nothing if is not about our problematic selves being changed; as we explore the reality of holiness, it makes a difference to us. The real conundrum is not one about how God can create a Jesus and Mary who do not share our problematic state, but rather about how God’s goodness can co-exist with a problematic creation, one in which the good is lacking.

There is no theological answer to that question. Some theologians have talked about ‘God respecting creaturely freedom’, but not in any way that really works. St Ignatius’s presentation of sin in Spiritual Exercises centres, not on a good confession, or an experience of forgiveness—still less on any sort of explanation. Instead he tries to lead to a place where we cry out in wonder. How can it be that the world has carried on when there has been so much resistance to God? Why has God not just given up or junked us into Hell already? Christianity does not answer these questions. Instead it attests to a revelation: a revelation of divine goodness keeping these unanswerable questions open, a goodness promising hope, a goodness inviting us not really to understand but rather to join in. The light shines in the darkness, a light which the darkness cannot overpower, a light made manifest in Jesus and Mary without sin. Theologies about how and the why fail, but the light—and the candles—remain, beckoningly.