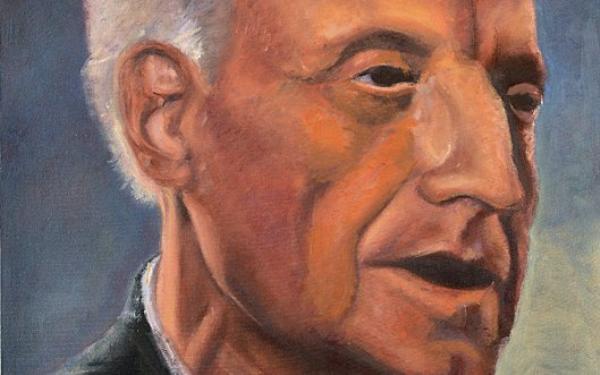 This month’s featured Jesuit in the Jesuits in Britain’s 2014 calendar is Fr Pedro Arrupe SJ, a much-loved General of the Society of Jesus and the founder of the Jesuit Refugee Service. Michael Campbell-Johnston SJ, who worked closely with Fr Arrupe, offers a personal reflection on ‘the founder of the modern Society.’

Pedro Arrupe probably had more influence on the Catholic Church than any other churchman in the last century – including the popes. The Jesuit Refugee Service was one of his great legacies but I do not think it was his greatest. It was the last important thing he did but I would say that his greatest legacy was to summon the 32nd General Congregation (GC32), the most authoritative body the Jesuits can assemble, which gave a new identity and purpose and redefined the role of the Jesuits for the modern age. Some people rightly call him therefore, ‘the founder of the modern Society’.

The importance of GC32 which Fr Arrupe called in 1974, to begin the following year, cannot be understated. It brought the Jesuits into the modern age. Until then, like many other religious congregations, the Society of Jesus had not fully taken on the Second Vatican Council in any serious way. Arrupe felt his main task was to help the Jesuits throughout the world to renew themselves according to Vatican II and that is what he set out to do. In that, he had an enormous influence on most other religious orders as well. For five three-year periods, he was elected Chairman of the Religious Congregations in Rome and many of their Generals used to come and see him in the Curia. His renewal of the Jesuits influenced so many other religious orders which, until then, were rather out of touch with the modern world.

Fr Arrupe led the Society along a new path that put it in much closer contact with the problems and needs of today’s world. His relevance stems from the fact that these needs have not diminished but grown since his death. The redefinition of the Society was expressed especially in the famous Decree 4 of GC32 which stated: ‘The mission of the Society of Jesus today is the service of faith, of which the promotion of justice is an absolute requirement’. This was a new challenge that even led to a new description of a Jesuit: ‘What is it to be a companion of Jesus today? It is to engage, under the standard of the Cross, in the crucial struggle of our time: the struggle for faith and that struggle for justice which it includes’.

One of Fr Arrupe’s closest collaborators, who became Vicar-General of the Society after Arrupe’s debilitating stroke, Fr Vincent O’Keefe claims that: ‘In 1974, Pedro Arrupe reached a strong conviction that never left him – that religious faith, to be truly evangelical, had to be vigorous in promoting justice and in opposing injustice, oppression and social evils such as poverty, hunger and all forms of racial discrimination’. In his book Arrupe: Witness of the 20th century, prophet of the 21st, Pedro Miguel Lamet wrote that, ‘the importance of the decision taken in 1975 in Rome would become manifest in later years in many deeds and options, in the martyrdom of more than 90 Jesuits killed in Third World countries, in the activities of Jesuits with refugees, poor farmers and socially marginalised people, the resulting defence of their rights. Because of its ecclesiastical and social consequences,’ Lamet concluded, ‘this Congregation (GC32) was perhaps the most important and decisive step among those taken during the whole of Arrupe’s life.’

The first collection of Fr Arrupe’s writings, A Planet to Heal, was compiled by John Harriott and published in 1977. In it, Harriott described Arrupe as ‘probably one of the most genuinely loved and admired Generals in Jesuit history’. He wrote of his ‘direct, sincere and unassuming’ matter and commented that ‘few people can leave his presence without feeling more spring in their step’. During the 23 years in which I knew and worked with Fr Arrupe, I certainly found that to be the case: he made one feel enthusiastic. One warmed to him as a person and to the ideas he was giving. He was a ‘people person’ and anyone who dealt with him was impressed not only by the man but by his spirit.

Arrupe was a very friendly man, very active and very intelligent. He was certainly a man of ideas. His successor as General, Fr Peter-Hans Kolvenbach, claimed he was ‘among those men who did not need words to communicate; his mere presence proclaimed a message of a man sent by the Lord to help the Society renew itself in the spirit of the Vatican Council … He wanted the Society to be forged into an apostolic instrument by the all-renewing spirit – with all the trials and errors, criticisms and misunderstandings that this renewal implied’.

In 1938, after he had been ordained, Arrupe was sent to Japan where the experience had a profound influence upon him. While there, he tried to understand not just the language but also the culture of the people with whom he worked: his emphasis on inculturation was another of his main contributions to the Society. He recognised the importance of missionaries learning not only the language but also the cultures and the ways of thought of the people to whom they were missionaries.  And he set a very good example of that himself. He ‘became Japanese’.

He was also a prayerful man. A holy man. He was a man of deep prayer and this came across when talking with him. I remember when he was talking about the retreat that he made just before he was appointed General (in 1965), and I was greatly impressed at the time. He made it absolutely clear how, in his retreat, he had striven to listen to God’s voice and how he would have to follow that in his life to do a good job as General. He was indeed a man of deep prayer and it had an enormous influence on the way he did things and the way he accepted the task of being General.

I was in the Curia in Rome at the time of the Vietnamese refugees.  The General’s advisers said to him: We’ve got to do something about this. Arrupe agreed.  As they discussed the Vietnamese boat people, Arrupe’s immediate reaction was: If St Ignatius were alive today, what would he do? That is when I was summoned. He gave me the task of composing a letter to the whole Society which he signed, with hardly any changes, setting up the Jesuit Refugee Service. So it was he who gave me that task and I wrote the letter. It had a momentous effect in the Society: provincials replied in a very positive way to the letter – offering men, offering to take refugees, making all sorts of offers. And then, of course, it had worldwide effect, with many other religious congregations imitating the Jesuit Refugee Service, whose work continues today and continues to grow. Arrupe was deeply influenced by St Ignatius and his teaching. He knew the writings of St Ignatius by heart, like the back of his hand. And that affected all he said and did.

Fr Arrupe spent ten years dying in our little Curia infirmary in Rome. Before his mind went completely and he could no longer express himself, he told people many times that he accepted this and was preparing for his death: this was what God wanted him to do and he set an extraordinary example.

It was my privilege to preside over what turned out to be Pedro Arrupe’s last active meeting as General, which took place in Bangkok on the Feast of the Transfiguration in 1981. At the end, he gave an impromptu talk, which fortunately was recorded by an Indian Jesuit. It was only on replaying the tape the next day after his stroke in Rome airport that we realised the significance of his insistence of the need for prayer, which he declared to be his ‘swan song for the Society’. I remember he used the Spanish expression canción de cisne which we had to translate for him. We wondered whether he had any premonition of what would happen the following day.

At GC33 – the last General Congregation at which he spoke– Arrupe described his own experience in the Curia when he was still an ill man. And he made that remarkable speech which was written and read out in Spanish: I had to give the English version. It is a very moving document that came straight from Arrupe himself. He said: ‘I wish to express myself to you better than I can today’, and then he spoke of the experience of his illness. He certainly accepted his illness as God’s will for him and for the Society.

Fr Arrupe spent ten years in the Curia infirmary, slowly dying. At first, we did not know how seriously ill he was and even hoped for his recovery. I acted as translator for him at meetings, including one with Son Sann, the former Prime Minister of Kampuchea. He had come to thank him for the work of the Jesuits in the refugee camps on the Thai border. He spoke in French and Arrupe replied in Spanish, which I had to translate. But it soon became obvious that his words were making no sense at all and I had to make up what I thought he would like to say – hoping I would not run out of ideas!

One thing that Fr Arrupe did appreciate in the early days of his illness was visiting the Eritrean refugees we were trying to help in the Centro Astalli, the Jesuit Refugee Service Centre in Rome, underneath the old rooms of St Ignatius. I drove him there several times and to a camp we set up in a city slum, always accompanied by his faithful infirmarian.

Fr Pedro Arrupe had an enormous effect on my personal life. It was he who sent me to Latin America, who gave me my first job, setting up the Institute in Guyana. And then he called me to Rome and I worked very closely with him. My primary feeling when I think of him is of gratitude. I cannot thank him enough for the enormous effect that he had on what I did as a Jesuit and the influence that he, as General, exerted on the Jesuits. He was indeed the founder of the modern Society of Jesus!

Read about the work of JRS on Thinking Faith:

‘Freely have you received, freely give’ by Bandi Mbubi http://www.thinkingfaith.org/articles/20110622_1.htm