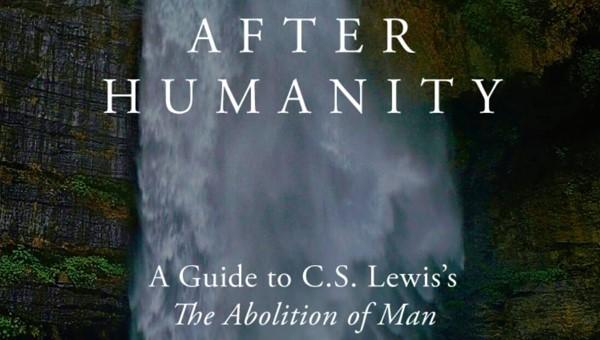 Michael Ward’s After Humanity is the definitive companion, commentary and introduction to C.S. Lewis’ The Abolition of Man. It presents an unfamiliar face of Lewis. Most readers know the fantasy author of the Narnia stories, the science fiction writer of the space trilogy, the Christian apologist, or the professor of medieval and Renaissance literature. In The Abolition of Man, we meet Lewis the philosopher, doing deft battle with the academy’s logical positivism and its popular offspring of widespread subjectivism.

Are moral values constructed by society – or can civilisations measure themselves against objective standards? Am I bound as a human being to help rather than harm others, especially my clan and kin – or are courage, decency or piety your values but not necessarily mine? Lewis contends that there is a core of ethical values shared by good pagans, besides Hindus, Jews, Muslims and Christians, whether we refer to it as the golden or moral law, virtue or duty. Lewis himself calls it the ‘Tao’ or ‘Way’.

The alternative is that when I call something ‘good’ or ‘beautiful’ I am not really referring to a quality in the object but rather describing my own appreciative feelings towards it. According to Lewis, this scepticism about values is often subtly disingenuous: when probed, its proponents turn out implicitly to favour one branch of the traditional tree of values. But when taken seriously subjectivism leads inexorably to dystopia. Might fills the vacuum left by right, and an elite few condition the many, not according to objective ethical criteria (they own none) but at whim.

Nobody is better equipped than Ward to unpick the intellectual, ethical and spiritual odyssey which underlies Lewis’ diagnosis. An extended commentary and gloss, complemented by colour photographs, introduces Lewis’ interlocutors. We meet Lewis as a young man converted back to the Tao he once considered ‘debunked’ through the influence of undergraduate friends, and Lewis the philosopher contesting the subjectivism of Oxford colleagues A.J. Ayer and I.A. Richards. Ward is particularly strong in his reminder that Lewis began his career as a tutor not of literature but of philosophy.

The series of lectures which form The Abolition of Man were delivered during the Second World War, and the book is haunted by a question that wartime makes inescapable: are there values worth dying for? This was a personal question for Lewis, who had lost several of his closest friends in the trenches of the First World War. Tempted by a disillusionment like that felt by Wilfred Owen or Siegfried Sassoon, Lewis nevertheless concludes that some values are worth the ultimate sacrifice of one’s life.

In Abolition, Lewis wrote as a philosopher and not as a theologian. His central point, indeed, is that the Tao is held in common by those of different creeds. Yet in his view, as aesthetic leads to ethics, so ethics lead finally to the experimentum crucis – the test of the cross.

This connection is subtly suggested by the cover of After Humanity, which features a man before a huge waterfall. The immediate reference is to Coleridge’s comic disagreement with the tourist who found a waterfall ‘pretty’ rather than sublime. Yet it is also redolent for Ward of the Jesuit bound to a cross who topples over the Iguazu Falls at the beginning of Roland Joffé’s The Mission (1986).

Abolition is a difficult book, pitched for a university audience and densely argued. Yet it is also an important book. Not only philosophers and literary scholars, but also economists and policymakers, have found in it a clear analysis of our own post-truth and rapidly post-human moment. Through his splendid elucidation of Lewis’ argument, Ward has helped to ensure that the prophetic power of Abolition reaches as wide a readership as possible.

Not everything in Abolition convinces me. In combatting cultural relativism, Lewis in my view occasionally falls victim to cultural homogenisation. For example, he associates the Tao with Confucius, from whose Analects he quotes, apparently unaware that the Tao really belongs to the Daodejing of Laozi, a very different Chinese sage. Quibbles of this kind, however, do not touch the core of Lewis’ thought. The omnipresence of the Tao – Lewis states the point clearly – is neither proven nor disproven by scholarly culling: the Tao is recognised by, and only by, those trying to live it.

During a recent visit to Oxford, I met up with Michael Ward. We had previously chatted in the States, where Ward lectured on his brilliant discovery of the role of the planets in Planet Narnia (Oxford University Press, 2008). Now, I wanted to raise a toast to the deserved success of After Humanity, and to Michael’s growing reputation as the foremost Lewis scholar of his generation.

As we chat at the Head of the Thames pub, dusk descends over the moving waters. The river reminds me of Lewis’ description of the Tao, emerging tranquilly and silently into the course of human history. I suddenly remember a line attributed to Lewis in the film Shadowlands: ‘we read to know we are not alone’. And whether it is the conversation, or the place, or the friendship, I fancy for a moment that we are both in Lewis’ presence.

The reviewer, Luke Taylor SJ, is a Jesuit of the British Province, who recently completed philosophy studies in Paris. Before joining the Society, he taught Renaissance literature at universities in the United States.