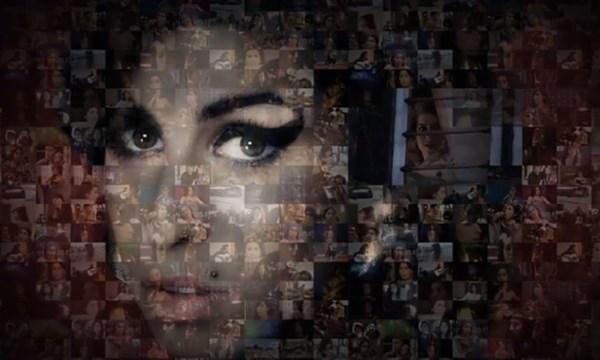 Very few people will watch Asif Kapadia's new documentary about the late Amy Winehouse without feeling somehow implicated in her downfall.  Certainly not lovers and family members who continue to exploit the gravy train after her death.  Nor promoters who ignored the obvious cracks and put profit before the wellbeing of their star.  Nor the often vicious media feeding a prurient public.  Nor even her fans, who vicariously celebrated her excesses and helped fuel her demons.

The few who do come out well are her first manager and the friends from her childhood and teenage years, who did what they could to help, but found themselves increasingly excluded from the inner sanctum.

Unusually for a historical documentary like this, there are no talking heads.  The film is assembled from still photographs, low-resolution home videos shot by friends, news reports, TV performances, and (the only footage actually shot by Kapadia) eerie aerial shots of city streets.  Over these images we hear the thoughts and memories of the people in her life, edited down from the hundreds of hours of audio interviews the director recorded while researching the film.  The effect of all this is to draw us intimately and movingly into Amy’s story.

Her face often fills the screen, which makes the changes in her appearance so much more immediate:  from toothy kid to chubby and mouthy adolescent.  From a fresh-faced teenager singing with the National Youth Jazz Orchestra to a 26-year-old with bad skin, missing teeth, stapled-on beehive hair, and a style of makeup Caitlin Moran once described as applied ‘while looking into a car wing-mirror.’

And of course on the soundtrack we also hear her extraordinary voice (which always sounds to me like Esther Philips imitating the tipsy phrasing of Billie Holiday.)  To accompany her voice, her self-penned lyrics appear on the screen, a lucid, intelligent and poetic commentary on her story.

Back in 2006, her breakthrough hit Rehab seemed like a light-hearted anthem of hedonistic female rebellion (‘They tried to make me go to rehab, I said no, no, no’) but in the film we learn the sinister background to these lyrics, particularly her excuse for refusing treatment: ‘if my Daddy thinks I’m fine.’

The ‘they’ who tried to get Amy to clean up were her young first manager, Nick Shymansky, and her teenage friends, Juliette and Lauren.  Amy’s father Mitch, a window fitter and taxi driver before Amy’s fame, seems to have been largely absent for his daughter’s youth (she was prescribed antidepressants at thirteen and later blamed her problems on her parents’ divorce) but returned to run her affairs after the success of her first album.  The film suggests that Mitch, together with promoter-cum-manager Raye Cosbert, seems to have deliberately ignored the warning signs in his lucrative daughter.

In a particularly uncomfortable scene, Amy is recuperating in St Lucia when Mitch turns up with a camera crew in tow (it turns out that he is the subject of his own TV documentary) and ticks her off for her offhand treatment of a couple of fans on the beach.  When Amy suggests that her father is exploiting her and putting the feelings of strangers before hers, he merely shrugs it off.

If her father comes off badly in the film (which he is loudly denouncing in the tabloids), her husband Blake Fielder-Civil is painted black.  Tall, dark, brashly over-confident and immature, he swept the singer off her feet when she moved to Camden Town after sacking her first manager, and introduced Amy, already a happy user of alcohol and marijuana, to heroin and crack cocaine.  Blake, a self-harmer since childhood, seems to have explored these fantasies with Amy.  The couple began to be photographed in public, intoxicated and bleeding.

In a particularly troubling sequence in the film, American fashion photographer Terry Richardson has Amy pose in his studio pressing shards of glass against her stomach.  Throughout the film the camera shutters of the ever-present shoals of paparazzi sound like knives being sharpened.

Old friends were alarmed but could do nothing.  We relive Amy’s success at a Grammy Awards ceremony in the States, to which the singer was linked live by satellite from London. Over footage of her friends and family hugging each other in celebration, Juliette tells us that Amy whispered ‘Jules, this is so boring without drugs.’

Things should have improved after Blake was imprisoned.  Amy does manage to give up the class-A drugs, but replaces these with alcohol.  We see her at a recording session, chugging from a litre bottle of whiskey.  Forced by her management to appear at a concert in Belgrade that she didn’t want to do, Amy totters onto the stage to a cheering crowd, but when she sits with her back to the audience to remove her shoes and fails to get up again, the Serbian cheers change to boos.  With her unsympathetic musicians looking on but doing nothing to help her, we feel the utter loneliness of this act of self-destructive defiance.

And in a way it feels like the Serbian crowd represents all of us, in the way we put idols on pedestals before we equally eagerly want to see them crack and fall.

In the last words of the film, her bodyguard, Andrew Morris, remembers the last night of Amy’s life when she showed him some footage of herself performing, and said, strangely surprised, ‘Boy, I can sing!’  After a pause the singer’s next words were, ‘If I could give it back just to walk down that street with no hassle, I would.’

A life so bleak that one would gladly return the gift of talent to be like anyone else in the street.  I found this unspeakably sad.