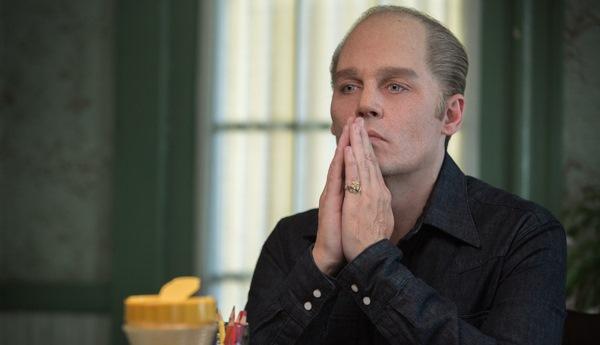 The next best thing to a good example is a terrible one. This could be called the principle idea behind the best Greek tragedy, at least as defined by Aristotle, who saw in the spectacle of a great man brought low a parable of our terrifying vulnerability to the exigencies of our lives. Chesterton once suggested that the only place to find romantic adventure in the modern world is in the detective drama, and on this model, perhaps, if we are looking for high tragedy, the best place to find it will be the mafia.

Black Mass is the dramatisation of real world mobster James ‘Whitey’ Bulger and the criminal organisation he ran in 1970s and ‘80s South Boston. Played mesmerisingly by Johnny Depp, Whitey is the Alcatraz-released ex-con who arrives back on his native streets about the same time as his brother, Billy Bulger (Benedict Cumberbatch), is elected state senator, and his best friend from childhood, John Connolly (Joel Edgerton), is promoted by the FBI. What follows is the unholy alliance between them, through which the bureau turns a blind eye to Whitey’s nefarious dealings in exchange for intelligence on the underworld’s bigger fish, in a mode of tragic grandeur that befits comparison to the greats.

This is an oedipal tale, not in the sense of suppressed desires or neuroses towards parents, but in the sense of a man doomed by decision-making in a difficult circumstance. Whitey may be a mobster but he is no melodramatic monster. While he does ruthlessly execute anyone who speaks or steps out against him, he also lets his aging mother win at cards and picks up his boy’s bike before walking into the house at night. Even his paternal advice, if overstated, is understandable: you don’t get into trouble for getting into fights, he advises his son shortly after insisting he finish his orange juice, you get into trouble for getting into fights when other people are watching. Sometimes, I think we can agree, the authority in charge is ineffective; and sometimes, within limits, you’ve got to do what you’ve got to do.

Extrapolate such exigency into a philosophy, however, and you’re going to deal – and probably get dealt – a lot of beatings in the shadows, of which there are plenty in this brutal film. But it is also a brilliant film that somehow never loses sight of what is good, even glorious, in man. This achievement is even more impressive when we consider the circumstances. Whereas the streets of many mid-sized American cities – Philadelphia, Atlanta, Indianapolis – have cleaned up considerably since Whitey walked them, in his day, when there were still railroad tracks and wrong sides of them, getting born over there probably meant growing up tough.

Zip codes may still be strong indexes for jail time, but it does take more than scuffles in the schoolyard to make a criminal kingpin. And in this there is a hope. To be human is to carry a dignity not even one’s choices can destroy, because, before death, there is always another chance. This is what makes so many films in the genre so potent. Such power often goes so far astray, but at their best, these parables of modern calamity always retain a remainder of a recognisable man.

This film does so with understated style.  Every character is sympathetic, because every character remains human, holding onto a kind of honour, however debased. Black Mass may take us to a dark place, but it never flicks off the torch. It is high tragedy worthy of its name – and probably a few Oscars – because it shows us that penultimate truth: that for any meaningful sacrilege, something must still be sacred.