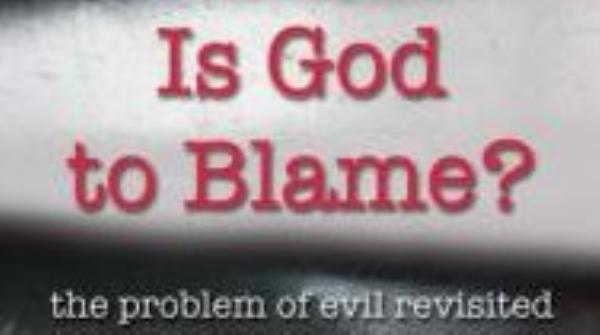 From space, the Earth looks peaceful, offering a “glimpse of divinity”, as the American astronaut Edgar Mitchell once said. Yet historical texts, the evening news and our own life experiences reveal a place of much misfortune and suffering. Ongoing conflict in Darfur, thousands killed by an earthquake in China, a man murdered while standing in a supermarket queue. How can we begin to understand such senselessness? We often cry out, why has God done this to me? How can these be the actions of a good God? For critics of religion, the sheer scale of suffering and tragedy disproves the existence of God. In response, Hughes attempts to articulate an argument for why the world, despite these tragedies, is still “the loving expression of a good God” (7).

In a post-Enlightenment world that has witnessed the Battle of the Somme in which 19,000 soldiers died in one day, the horrific genocide of tens of millions of lives committed by Hitler, Stalin, Pol Pot and others, and the rapid spread of AIDS, the simple assurances of Thomas Aquinas that God “permits evil to exist – from this he brings forth good” (20) are no longer convincing. A modern theist must grapple with The Problem of Evil in new ways, and Hughes proposes a rational design for understanding why evil exists, based on considering God as a moral agent. In order for God to be blameworthy, all five of the following conditions must be met. 1) The world is a bad world all things considered, 2) God created the world, 3) God knew how the world would work out, 4) God could have created a better world than this, and 5) God knew he could have created a better world than this.

Although the discussion around these conditions raises valid points, readers seeking some solace or a profound answer will be disappointed. For example, consider condition no. 4: God could have created a better world than this. Hughes quotes Leibniz, saying “the infinite goodness of God makes it inevitable that God will always do the best possible action” (41), namely create the best possible world. The difficulty with arguments about possibility is that they are grounded in our finite human understanding. To argue that the whole world would go haywire if the fixed rules of nature as we know them did not exist will strike many as far-fetched and unconvincing. Such critics, drawing on Hume’s outlook that “any world is a possible world for God”, view the Earth as “faulty and imperfect… only the first rude essay of some infant deity who afterwards abandoned it, ashamed of his performance” (52). The argument that God could not have created a better world than this may be theologically accurate and acceptable to believers, yet it likely is simply unsettling (and unhelpful) to anyone who has suffered from some senseless action.

This book seems to struggle within itself to answer deeply challenging and provocative theological questions, focusing on how to convince critics like Hume while searching for clear and meaningful responses that move believers past the traditional theodicies, or justifications of God’s actions. The former task, as Hughes says, is a formidable one indeed, and I believe it requires deeper delving into questions of God’s omniscience, amongst others. The latter task of addressing theodicies and searching for appropriate answers for believers succeeds fairly well in Part II.

Amazingly, the language used in the Hebrew Bible and the New Testament to justify God’s actions is much the same as today. Many people still take a fatalistic view of the world. Some see suffering (i.e. floods, AIDS) as divine punishment for our wickedness, either individual or collective. Others believe that “what doesn’t kill you only makes you stronger”, as though God were a pedagogue teaching us a lesson through suffering. Still others speak of being “fallen people in a fallen world”, while many honestly believe that God sends trials to test our faith. All of these arguments are riddled with illogic and poor theology, as Hughes points out; furthermore, they do not truly provide any comfort to one who is suffering. We rather should strengthen our belief and trust in the goodness of God.

Is God to Blame? forces one to think seriously about The Problem of Evil, a problem that we often prefer to ignore rather than confront. Hughes’s rational, legalistic approach to confronting The Problem presents arguments to exonerate God that are convincing to those who already believe in the goodness of God, but I fear that sceptics like Hume will remain largely unconvinced.

The most powerful lessons come near the end of the book in “Warnings and Excesses”. Hughes, like Job, tries to demonstrate through different Biblical examples that we do not have to show why God does everything. As God reminds Job, many things are beyond human understanding.

Where were you when I founded the earth? Tell me, if you have understanding. Who determined its size; do you know? Who stretched out the measuring line for it? Into what were its pedestals sunk, and who laid the cornerstone? (Job 38:4-6)

In the end, we must simply maintain our faith in the goodness of God and in the belief that God’s created world is indeed “very good”, despite the limitations imposed by our finite human intelligence. This faith gives us that “glimpse of divinity”, even while our feet remain firmly on the ground.

Is God to Blame? at Veritas Publications

Stepping Stones to Other Religions: A Christian Theology of Inter-Religious Dialogue

St Henry Morse SJ: ‘A saviour of life unto life’
Alfred Delp: committed to Christ
Richard Attenborough: A life in pictures
Persepolis
Re-imagining the world: Discernment of spirits in Let Us Dream