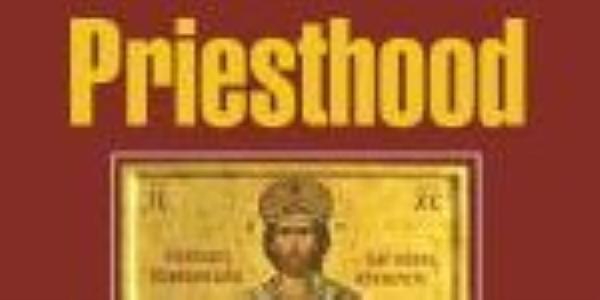 I found the kind of thing I was hoping to find on p.181 – a story related by Fr. Peter-Michael Scott of a young girl dying of Leukaemia, whose poignant and beautiful words to her parents, revealing her simple and radiant faith, moved me greatly: here, I thought, is one of those privileged moments in which a priest is caught up, and helps bring about, just by being who he is, a wonderful epiphany of God’s love.

This collection of short essays on priesthood – 78 in total, with contributions from Popes, Archbishops, Bishops, diocesan priests and priests of religious orders – is full of wisdom drawn from years of experience of priestly ministry. As the compiler, Fr. Daniel Cronin suggests in the preface, it is a book to be dipped into, each essay likely to offer to its reader something to ponder on, some encouragement for their own faith.

It is not difficult to pick out common themes: there is scarcely an essay without mention of the centrality of prayer in the life of the priest, of the futility of trying to bring people to Christ without having a living relationship with Christ oneself; and so many, too, underlining that mutually enriching relationship between priest and people. Frequently the celebration of the Eucharist is recognised as the privileged moment when both those dimensions of priestly life, relationship with God and with his people, find their expression.

Given the diversity of the priestly background of the contributors, it is not surprising that one should detect within these personal reflections different models of priesthood. We live in a Church where the predominant model is that of the diocesan priest, with the Sunday liturgy, the communal celebration of Christ’s paschal mystery, the defining moment in the life of the priest and his people. So it is good that this collection includes on the one hand the testimony of a Carthusian, a ‘solitary’ called ‘to witness visibly in his life, to the absolute priority of God over any created thing’ (p.35), and on the other that of Jesuit Fr Gerry O’Collins who underlines the priestly aspect of Christ’s public ministry, as well as the priestly apostolic dimension of the ministry of St. Paul – facets of priestly life central to some models of religious priesthood. As O’Collins puts it: ‘Proclaiming the Kingdom, healing the sick, forgiving sinners, feeding the hungry and the other activities that filled the years of Jesus’ public life belonged to his priestly ministry as much as his institution of the Eucharist during the celebration of the Last Supper’ (p. 144).

Much of the reflection offered can be seen as the traces of an essential working through of the Second Vatican Council’s exposition of the one priesthood of Christ, and the participation in that of the priesthood of the people and ministerial priesthood. But these essays are not mini theological treatises, and it is often when the language of theological distinctions is replaced by that of personal experience that fresh insight is offered to the reader. To be a priest is to be someone who helps ‘to fit the story of [another] person’s life within the Great Story’ (Fr. Vivian Boland OP, p.22); a priest is ‘a midwife of the sacredness already within the parishioners in the ordinariness of their days’ (Fr. Daniel O’Leary, p.150); a priest is someone ‘whose presence will remind people that no matter what their difficulties might be, God really loves them and cares for them’ (Bishop Thomas McMahon, quoting Cardinal Bernadin, p.123). Nothing complicated here, but expressions that capture the loving attentiveness of men seeking to be the presence of Christ to others.

I began this review with the mention of Fr. Peter-Michael Scott’s story of being with a young girl dying of Leukaemia and I said that I found in that story what I was hoping to find. That one story acts as a kind of icon of what all the contributors to this book will have experienced: the breaking through of the presence of God, as they as priests encounter people in the reality – sometimes sad, sometimes joyful – of their day to day lives. There is a similar quality in the story told by Fr. Jim O’Connor (p.148) of how he ended up feeling very disappointed having given his Sunday homily at the end of a week in which prayer had been difficult, but a few days later he received a phone call from a parishioner to thank him for this very homily. She had had an agonising year, but after the homily ‘the burden had lifted for the first time in months and [she] was deeply grateful for what I had said’ (p.148). As he asked his parishioner what she had found particularly helpful he realised that he ‘had not said what she had heard’. Which priest hasn’t had a similarly humbling experience, of recognising the power of God working in unexpected ways through them, not least in their moments of weakness?

The relating of such personal experiences, for me at least, provides the highlights of this collection, and I have to say I would have welcomed more! There is another that I would like to end with, an anecdote that serves as a reminder to all in this Year of the Priest that there is something about this ministry that will transcend our various and important attempts to define it. It comes from Fr. Nick Gosnell, an army Chaplain, and the one married priest, I think, to contribute to the collection. Taking shelter from enemy fire, he is joined by a large corporal from the catering platoon. ‘“Ah it’s you Father,” he said as he recognised me… “You know” he continued as we awaited our fate, “I’ve been meaning to say for a while that I don’t know what it is that you do, but I am ruddy glad that you’re here doing it.”’ (p.70)

The reviewer, Matthew Power SJ, is the Vocations Director for the British Province of the Society of Jesus.

Catholic Bioethics for a New Millennium