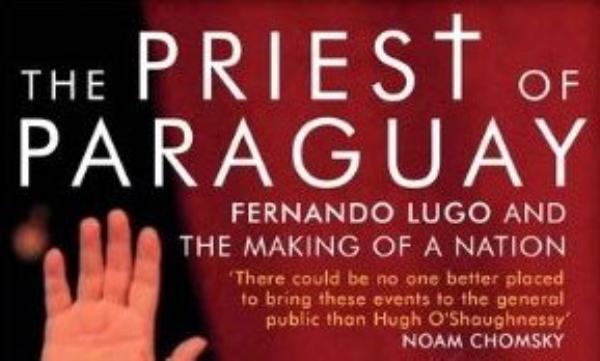 The story of a Roman Catholic bishop who resigned his bishopric to run in a presidential election was always going to be a fairly unique one.  Even more so when, having won the election, he was welcomed by the Vatican as a legitimate president and sent a present by the Pope.  Fernando Lugo is the man in question and his country of Paraguay the beneficiary of his decision.  His is an extraordinary story, related in detail in this important and gripping book which also paints a vivid picture of a reality shared by other Latin American countries.

Almost from its outset, Paraguay seemed to be a doomed nation.  Since gaining independence in 1811, its history has been dominated by long periods of political instability and devastating wars with its neighbours. In the mid-fifties it fell under the brutal 36-year dictatorship of Alfredo Stroessner, which, as the authors put it, ‘left Paraguay like a house stricken with dry rot.’  The richest 10% of the population had 40 times the income of the poorest 10%, while the richest 1% of landowners were sitting on 80% of the land.  The authors show clearly how this situation was maintained through a combination of trickery, corruption and terror, by a ruling party (the Colorados) which held power for 61 years.  The regime was recognised and supported by industrialised nations concerned with safeguarding the prosperity of their markets, especially for weapons.

This was the world in which Fernando Lugo grew up.  Born in 1951 in a country village to a railway worker and his schoolmistress wife, he both witnessed and experienced injustice from childhood.  He was 11 when his father, Guillermo, was arrested and subjected to ‘waterboarding’, a process the Paraguayan police had learnt from the USA and that was later formally taught in the School of the Americas established in the Panama Canal Zone.  It did serious damage to Guillermo’s kidneys and caused his death.  Fernando’s three brothers were also tortured by Stroessner’s police and the family pressured him to forget any ideas of going into politics.  Instead, in 1970 he entered the Paraguayan novitiate of the Divine Word Missionaries.

The authors trace, in some detail, Lugo’s religious formation and his gradual introduction to the then new liberation theology.  A crucial stage in this process was a year he spent in Ecuador just after his ordination during which he fell under the influence of Bishop Leonidas Proaño who, a year previously, had been arrested with 16 other bishops for ‘subversive activities’.  As Lugo said later, ‘I was proud that one of the bishops detained in Riobamba by the military was Paraguayan, Mgr Bogarín Argaña’, who for years worked among the peasants pushing for land reform.  However, when Lugo returned to his homeland, Stroessner made it known to the priest’s superiors that they should send him out of the country, so he was sent to the Gregorian University in Rome where he did a degree in spirituality and the Church’s social teaching.

After returning to Paraguay, in 1994 he was appointed bishop of San Pedro del Ycuamandeyú, one of the poorest areas of the country.  Over the subsequent ten years, he became a champion of the rural poor and indigenous peoples, working through base Christian communities (comunidades eclesiales de base, whose numbers in the diocese he more than doubled), living in a small house indistinguishable from any other, using the Guaraní language and travelling around the diocese on a motorbike.  As might be expected, he emerged gradually as one of the few voices that could speak with authority on behalf of the poor, and a number of political groups sought him out and began looking to him as a possible leader of the opposition and presidential candidate.  Lugo resisted the call for a long time, but finally announced his candidature on Christmas Day 2006.  He was elected comfortably two years later, released from his vows but faced with the daunting problems of trying to ‘haul Paraguay out of the quagmires in which history landed it.’

The value of this well-researched book is that it provides the background necessary to understand the huge task that now faces Fernando Lugo.  And his story is not only of relevance to the situation in Paraguay: Lugo joins the company of Lula of Brazil, Chávez of Venezuela, Morales of Bolivia and Correa of Ecuador, all of whom are engaged in a struggle for social justice that could transform Latin America and give new hope and life to its people.  There may be disagreement over some of the methods employed or even the objectives sought, but many in Latin America will feel that is not for wealthy, industrialised nations to determine these: they may rather look to such nations to support their attempts to put right intolerable situations.  Hopefully this book will go some way towards increasing understanding of the huge task facing Latin Americans.

Find this book on the Zed Books web site