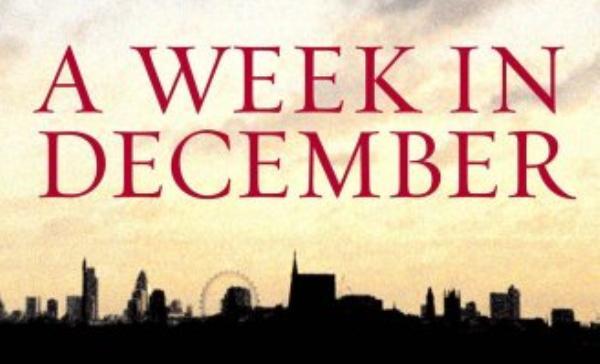 Sebastian Faulks rose to prominence in the early nineties with his novel Birdsong (1993), an exploration of the First World War in which he interrogated history through the detailed and rich lives of his characters. A Week in December attempts a similar project for more recent times. Taking the lives of a group of London residents in the run up to Christmas, Faulks addresses issues in contemporary Britain from suicide bombing attempts to the financial crisis. The opening of the novel sweeps over the public life of the city of London: the construction site of Europe's biggest urban shopping centre, Arsenal playing Chelsea at the Emirates stadium and walkers with their dogs in Victoria Park. Then it sinks down to the Circle Line on the Underground where a tube driver watches passengers piling out of the train day after day onto the platform. From this public world, Faulks enters masterfully into the private experiences of individual Londoners and weaves together their daily lives. The city seems familiar, but readers should beware that Faulks’s latest novel will take them into the strangely unfamiliar and tensely political interior life of contemporary Britain.

Faulks’s characters through whom London is described include Jenni Fortune, the tube driver coming to terms with a death on the tracks, and unsuccessful barrister Gabriel Northwood. There is a literary critic who corrects the spelling and grammar of the teachers at a leading public school and helps a pickle magnate prepare to receive an OBE. Then there is Miranda who looks forward all day to logging onto her computer and entering into a world where she can take on the role of another character. We also meet the wife of an up-and-coming MP and a Polish footballer in the premiership adapting to a new life in London. Most significant for Faulks is Hassan, a Scottish Muslim drawn into a radical Islamic group. It is not the extremists, though, who are the most disturbing characters in the novel. Dickensian hedge fund manager John Veals, whose office overlooks Westminster Cathedral, is the true villain of the story, bringing down a bank through his financial dealings and with it the lives of thousands of farmers in Africa.

On its release, the novel was greeted mostly with an appreciation for Faulks’s narrative prowess. His attempt at writing about what radicalises  young Muslims to become terrorists is brave, and his portrayal of the would-be suicide bomber and his loving family suggests a sympathy with Islam. However, many of Faulks’s comments in interviews at the time of the release of A Week in December revealed a lack of religious sensibility and respect. His statement that the Qur’an contains 'the depressive rantings of a schizophrenic’ was highly offensive to many people of faith. Faulks’s comments about schizophrenia are related to one of the powerful motifs of the novel. The illness, whose symptoms include hearing voices, seems to be understood by Faulks as a psychosis that separates the one who has it from reality. Faulks uses this to explore the tensions created by pluralism as he describes the characters' attempts to cope with a society in which many voices compete for their attention. The Qur’an represents for Faulks the 'one voice' that urges on his would-be suicide bomber but in the end cannot be heard against the background noise of contemporary culture. This  distorted motivation having been drowned out, the most compelling voice in the novel is that of self-interest, embodied in the character to whom success eventually comes: Veals, with his unscrupulous financial deals.

Faulks’s previous involvement with Salman Rushdie might have told him to steer clear of religious subject matter. After the release of The Satanic Verses in 1988, Faulks staunchly defended Rushdie's right to free speech. While Rushdie later affirmed his Islamic beliefs, Faulks famously compared this changed attitude to another case of heresy in 1633, that of Galileo being forced to recant his view that the earth orbited the sun. Faulks’s own recanting of his most recent comments came in an article in The Telegraph in which he maintained that after all, only a 'healthy and lucid man' could have achieved the military, religious and political success of the Prophet Mohammed. He admitted naïvete at being 'disappointed' with the Qur’an having compared it with the 'exciting stories of the Old Testament' with which he was brought up.

Faulks’s handling of faith in the novel leaves a lot to be desired. The deep exploration of maternity in Green Dolphin Street (2001) and the experience of wartime in Birdsong point to a novelist able to get inside the skin of his characters and move comfortably around the literary world they inhabit. His narrative voice is usually so powerful, well researched and convincing, that it is disappointing to encounter him as anything less than this. His public comments show that he stands at a surprising distance from the characters he so realistically depicts.

Originally the novel was to be called 'The Week before Christmas' but the publishers asked that the title be changed to A Week in December, so that sales would be better in the summer. Does it make good Christmas reading? Well, in the midst of our financial difficulties and  with unemployment at nearly two and a half million, readers may not be in the mood for satire.  Faulks himself has stated that his orginal intention was to write a serious novel about contemporary Britain but that he was surprised to find himself compelled to adopt a satirical stance. I wonder what that anecdote says about the state of our culture.