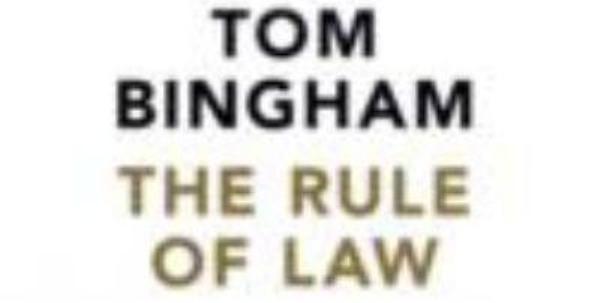 Lord Bingham had a unique career as an English judge – Master of the Rolls, Lord Chief Justice and Senior Law Lord. He has now produced an accessible book on The Rule of Law, This is genuinely essential reading, both for the definitive conclusions it reaches and for the questions it identifies as being left open. Lord Bingham is entirely right that we need to pause and ask ourselves what ‘the rule of law’ means, how it is to be defined.

Lord Bingham’s central thesis is that ‘the rule of law’ is a necessary part of modern democracy. He rejects the proposition that the ‘rule of law’ can be achieved by rigorous conformity to a set of legal rules: ‘I would roundly reject it in favour of a “thick” definition, embracing the protection of human rights within its scope.’ In an interview on Start the Week, Lord Bingham expanded on this: human rights, he declared, are essential to the fulfilment of one’s personality. The dignity of the human person is, on Lord Bingham’s account, the foundation of the rule of law.

This clarity that gross defiance of human rights is incompatible with the rule of law leads immediately, as he recognises, to two questions: what rights should be protected by law, and what sanctions should be imposed for breach?

The answer he gives to the first question in the chapter on Human Rights is subject to a caveat: ‘It must be accepted that the outer edges of some fundamental rights are not clear-cut.’ (Page 68) He then goes on to assert: ‘It is, I think, possible to identify the rights and freedoms which, in the UK and developed Western or Westernised countries elsewhere, are seen as fundamental, and the rule of law requires that those rights should be protected.’ He goes on to assert that statute and common law have long given a measure of protection, but that the rights set out in the European Convention on Human Rights are ‘guarantees which no one living in a democratic society...should be required to forgo.’

This answer is set in a historical context – the rule of law is not a creation of any one convention or statute but the outcome of a long period in which the concept developed. Magna Carta is given a prominent place, but is itself the product of successive declarations. A splendid set of precepts from the 1660s is cited. Dicey’s nineteenth century work is discussed. This is helpful and brings home to us an important fact: we have taken centuries to develop a shared understanding as a nation of what rights are to be respected.

The second question, sanctions for breaches, comes down to the enforcement and upholding of the rule of law against the state – that is politicians, bureaucrats and, potentially, a Parliament that enacts despotic laws. It is in this area that Lord Bingham seems less persuasive, especially in his discussion of international law, which he regards as a part of the rule of law.

If we accept Lord Bingham’s analysis that in the invasion of Iraq, ‘there was a serious violation of international law and the rule of law’ (p. 124) we should surely be driven to the conclusion that Mr Blair committed the crime for which von Ribbentrop, Field Marshal Keitel and the former Japanese premier Tojo were hanged: waging aggressive war. Lord Bingham’s conclusion is weak here: ‘they [the invaders of Iraq] have been arraigned at the bar of world opinion, and judged unfavourably with resulting damage to their standing and influence’. Lord Bingham observes, ‘While prophecy is always perilous, it is perhaps unlikely that states chastened by their experience in Iraq will be eager to repeat it.’ (p. 129) At the end of the First World War, there were calls for the violators of Belgium’s and Luxembourg’s neutrality, the murderers of Belgian civilians and the authors of unrestricted submarine warfare to suffer a punishment so ‘memorable, because so terrible’ that others would hesitate to follow their example. That did not happen. In 1945, some authors of the worst atrocities went to the gallows; more recently, those miscreants from the Balkans that have been arrested are being tried.

History suggests that Lord Bingham is guilty of wishful thinking. He is also guilty of inconsistency. If he is right to conclude, and it is hard to see how he could be wrong, that ‘the daunting challenges now facing the world’ require enforcement of international law (page 129) then how can he avoid concluding that ‘enforcement’ requires that the principal architects of the Iraq invasion be put on trial? It would of course be for the prosecution to prove – as it was at Nuremburg – that they committed a hideous crime, and some at Nuremburg were acquitted. But if the architects of the Iraq war were convicted, they should be punished so as to deter others.

Lord Bingham reflects on the questions raised by the ‘sovereignty of Parliament’. This is indeed a difficult area, and we should of course instantly reject the facile notion that a written constitution would remove all problems. The USA has a constitution but Lord Bingham (page 127) points out that this has not prevented a number of breaches of the Geneva Convention as a deliberate act of policy. Lord Bingham has a valuable and detailed discussion of the problem of Parliamentary sovereignty. Although he cites a number of arguments to the effect that judges could in some circumstances overrule an Act of Parliament, and draws attention to the potential for mischief in what has effectively become a unicameral legislature under the influence of the executive, he comes down unequivocally on the side of those who maintain that judges should not have the power to set aside the express provision of a Statute.

His argument is very clear but at odds with the tradition of the Catholic Church – St Thomas Aquinas stated that if a human law commanded action prohibited by the divine law, one had to disobey the human law. Pope Pius XII was, in an address to Italian lawyers in 1948, equally firm that there were circumstances in which a judge must refuse to enforce an unjust law. Although Lord Bingham’s formulation (on Start the Week) of a relationship between human rights and the fulfilment of the person, in which the human person is primary, is congenial to Catholic thought, he cannot of course rely on the Magisterium to solve a secular problem – and he expressly does not do so. In a splendid rhetorical flourish, he declares: ‘The British people have not repelled the extraneous power of the papacy in spiritual matters and the pretensions of royal power in temporal [matters] in order to subject themselves to the unchallengeable rulings of unelected judges.’ (Page 168) As history, this is wonderfully wrong: the Acts of Supremacy of Henry VIII and Elizabeth I would never have passed an elected House of Commons; and royal temporal power was not replaced by a democracy but by an oligarchy intent on maintaining its grip on what it had stolen from the English (and Welsh) people – the abbey and common lands. But Lord Bingham’s historical howler does point to three very important propositions, captured in his correct rejection of untrammelled power being given to unelected judges. The first was set out by the last of the Western Fathers, St Isidore, and repeated by St Thomas: human law is binding because it is made with the consent of the people. The second, introduced into political thought by Robert Parsons in 1594, is that not only does government derive its authority from the consent of the people but the people may revoke that consent. The third is the identification by Edith Stein – St Teresa Benedicta a Croce, Discalced Carmelite, in a monograph written in 1921 – of the morality of the state with individual morality. All of these point to the ultimate power to make laws resting with the elected Members of the House of Commons.

The value – the very great value – of Lord Bingham’s book is that it provides an accessible and readable introduction to a subject anyone concerned with the common good needs to think about, a topic now firmly on the political agenda, namely what is required for good law and good government.

Joe Egerton is a management consultant specialising in financial services and co-founder of Ignacity.