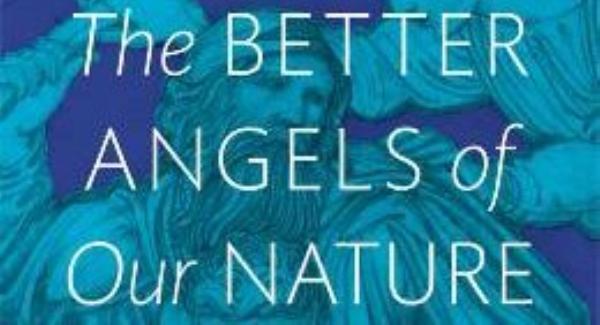 Contrary to popular perception, people in modern, Western democracies live in less violent times than at any point in history. This is the thesis that psychologist and Harvard Professor, Steven Pinker sets out to defend in The Better Angels of Our Nature. He rebuts statistically all reports of our increasingly violent times and cultures, using his analysis of ten thousand years of human history and an encyclopaedic account of recent psychological theories and research. He concludes that we have now moved into the age of a ‘civilizing process’ of open, liberal democracies, in which the fear of the Doomsday ‘nuclear war clock’ has passed. Ploughing through this weighty tome will reward you with the thought that perhaps we can all sleep easier in our beds.

At first sight, Pinker’s historical accounts, thirty-plus pages of scholarly research references and numerous graphs plunging downwards, are overwhelming but reassuring: ‘violence has declined over long stretches of time, and today we may be living in the most peaceable era in our species’ existence.’ His history puts into context long-forgotten conflicts, such as the An Lushan rebellion in eighth century China (though there is no mention of the bloodiest battle ever fought on British soil, on Palm Sunday 1462 in Yorkshire), and recounts through eight chapters the horrors of past inhumanities. According to his presentation of cruel practices and numbers, the fourteenth, sixteenth and seventeenth centuries were far more destructive that the twentieth, in which the 40 million war deaths accounted for 0.7% of the world’s population. We are presented with graphs of real incomes (1200-1850), book production (1470-1860) and inflation rates (1200-2000), all to reinforce his argument that we have moved into less violent times. His analysis draws on Peter Brecke’s Conflict Catalogue (4,500 conflicts between 1400-2000) and he spells out the effects of the ‘humanitarian revolution’, rooted in the Enlightenment, which led to the ‘long peace’ of 1945-2000. But this historical sweep relies on the philosopher Kant’s insistence on peace as the result of democracy, open economies and engagement with the international community. As Pinker puts it: ‘the decline of genocide over the last third of a century may be traced to stable government, democracy, openness to trade and humanistic ruling that elevate the interests of individuals over struggles among groups’ (p. 342).

His chapter on ‘Rights Revolution’ includes a most interesting section on animal cruelty and rights, which is of no little importance to psychological research. But it is when he turns to the reasons for his argument for a decline in violence that Pinker takes us deep into practical psychology, providing fascinating insights into the virtue of self-control – ‘violence is largely a problem of self-control’ – and noting that there is too much self-esteem, not too little, among violent young men. Nor is empathy to be regarded uncritically; it can, he argues, undermine fairness. Self-deception and social dynamics get full, contemporary treatment, too.

Despite his constant asides attacking religion as a cause of violence (and his theology is particularly weak, seeing the Hebrew Bible as ‘obsessed with revenge’, relying on an apple he finds in Genesis and judging that Christians believe in the crucifixion as Good News), Pinker’s emphasis on the need to rehabilitate reason in our time would be most welcome to the ears of Pope Benedict. However, although he claims to rely on the ‘vaccine’ of open, liberal, modern cosmopolitan democracies to hold back violence, and prays in aid Adam Smith’s The Theory of Moral Sentiments, his commitment to capitalism as ‘a positive sum game of trading surpluses’ and his defence of the ‘free market’ against St Augustine and St Jerome beg all kinds of questions. In a globalised world now littered with life-threatening landmines and cluster bombs, and relying on the enforcement of drones to introduce democracy, perhaps his optimism reflects a conservative complacency. Pinker draws on history, psychology and philosophy in a work of amazing scope and detailed reference, but this is far from the last word. It still needs to be interrogated by contemporary economics, politics and theology.

The reviewer, John Battle, is former Member of Parliament for Leeds West.