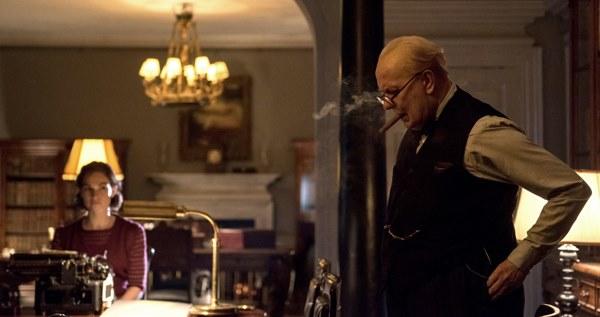 Darkest Hour is not a deep film but it is intelligent and handsome. It is set in the tense few weeks leading up to what Churchill describes, contrary to popular opinion, as ‘the deliverance’ of Dunkirk. Although it has an extraordinary story to tell, the film does not shirk the complexities of the situation that Great Britain, Europe and the world faced in those few days lived on the brink of the abyss.

It is not always easy to hold the balance between detail and drama, but Darkest Hour achieves this almost imperceptibly by the strength of its script, design and characterisation. It never lets the human and personal dramas become overwhelmed by politics or argument. It rightly grasps that precisely in these liminal moments of national and global crises are the realities of people’s lives and personal histories.

The drama revolves around the person of Winston Churchill with all his complications and problematic grandeur. He gives the film its drive and coherence, its principle light and shade; the other personalities in the film, as in life, have supporting roles in their own right but also illuminate aspects of Churchill. This is especially true of two women: Clemmie, his wife, played with pitch-perfect emotional and intellectual intelligence by Kristin Scott Thomas; and the softer, more vulnerable but courageous Elizabeth Layton, his secretary, played by Lily James. James shows the same qualities as Thomas modulated in a different key and relationship. In different ways, both women knew the monster that Churchill could be, they had to deal with his ‘black dog’ depressions as well as his fragility. Yet, both also understood his greatness and his importance for this extraordinary moment, this ‘tide in the affairs of men.’ They never wavered in their loyalty and stamina in supporting him while, in the case of Clemmie, simultaneously keeping him in order with sharp wit and perception. Their characters are scripted to allow us to get as close to Winston as they were but without losing their own personalities; throughout we catch glimpses of their own sacrifices and vulnerabilities. In a subtle way, Darkest Hour portrays the strength and heroism of women at the heart of the mess that men can make.

Churchill’s principal opponents, Chamberlain and Lord Halifax, are also much more than cardboard villains, foils for Churchill’s moral force. We meet them as honourable men who make the argument for peace because they are haunted by the carnage of the Great War, which ended just 22 years earlier. They can also rehearse the litany of Churchill’s military disasters and their enormous cost in human lives.  In this respect they serve, like Clemmie and Elizabeth Layton, to keep our perception of ‘Winston’ real and not an idealised, romantic, heroic distortion. They remind us that Churchill has a deeply problematic history as a leader.

But it is the dynamic, moody, towering and very human Churchill that is always at the centre.  Together with writer, Anthony McCarten, Oldman gives us a Churchill who is neither cliché nor pastiche. Notwithstanding the Shakespearean echoes of Henry V and King Lear, he is also a modern anti-hero. He is not ‘loveable’ in the normal sense. Oldman’s Churchill strides but also collapses, never more so than at the pivotal moment where he appears absolutely lost when the destruction of the army at Dunkirk appears inevitable. The only way ahead is through an ignominious peace that will be followed by a treacherous betrayal; Churchill rightly sees that Hitler will honour no agreement once it ceases to be of use to him. In this scene, we meet a solitary, confused and dishevelled figure, his shrunken state reflected in the empty, unused bedroom to which he has retreated, strewn with discarded pieces of random furniture and lined with peeling wallpaper. Here we find the great Samson of the English language, who has modelled himself on Cicero, shorn of words. Almost anticipating the failed evacuation of the troops, he is lost on a vast sea in which words, like flotsam and jetsam, drift incoherently past. The set, the lighting and the acting manage to project the inner desolation of the moment as well as its exterior bleakness. In his broken and deserted state, Churchill is visited by the king, played in an understated way by Ben Mendelsohn. His George VI has a dignity and moral authority, again mingled with fragility, which manages to convince us that this moment, or something like it, could have happened. Even when we recognise that it is a somewhat contrived piece of drama, it marks a turning point. As the king reveals his humanity, the disoriented Churchill recovers himself as prime minister. They recognise that for the sake of the country they need each other, the two great offices of state need to move beyond the normal structures of power and tradition into the personal and the human if they are to work. Their combined strength gives new hope and determination to each of them, and it is the king who reminds his prime minister of the need to rouse the spirit of the British people.

And so, enter the British people! At this point, we have another invented scene that has received much criticism and ridicule, but is dramatically effective. Churchill, the aristocrat who has never used the Underground (lucky him!) breaks his journey to parliament where he will face his opponents, to encounter the noble plebs on the Circle and District line. Perhaps the most unbelievable part of this scene is that the Circle Line train actually arrived, but that aside, even conceding that it is rather mawkish, it is not entirely out of place: it is not Churchill’s will and spirit that will defeat the enemy – we have seen him lost and impotent – it is that of the people. As he himself constantly testified in his speeches at the time, the key to victory was the people’s courage, perseverance and will. Here is the great alliance, king, government and people, which is the unique constitutional strength and balance of ‘this island race’ and its settled political culture. It was Churchill’s genius, as it was that of Cicero, not just to rouse the spirit of the people but to create it; to remind people what strength they had and what they could endure.

Darkest Hour wonderfully uses chiaroscuro lighting to deepen and give emotional as well as physical context to the characters and the drama. At times, we see frames that Rembrandt could have painted. At other moments, the isolation and claustrophobia of leadership are caught in Francis Bacon-like settings where light limits, defines and confines the space as well as the moment. In other scenes, a shaft of light cuts through the darkness, intensifying it and heightening the drama, in a way that any Dutch Master would recognise. For me, Bruno Debonnell’s cinematography made this film particularly satisfying and complete.

However we may understand this film historically, we cannot ignore the fact that our national memory, as well as our spirit, is also a creation of Winston Churchill’s. We see, feel and remember history through the emotional lens his oratory has created. There is a danger in this sort of memory, however. Too easily it can become a vehicle of nostalgia, a retreat from the challenge of the present rather than a resource for meeting it. Nostalgia can weaken rather than renew and strengthen the spirit of the people; reality can be distorted rather than honestly recognised. I do not believe that Darkest Hour falls into this trap. It is instructive to listen again to the whole of Churchill’s actual Dunkirk speech. It is delivered in a tired voice without much rhetorical energy. Without in any way disguising the disaster, it manages to make it an occasion for thanksgiving: it calls forth the great heroic virtues of a people that discovers strength in adversity and comes to recognise the values by which it chooses to live. Above all, it reminds us that even if we stand alone as a nation, no one of us is alone within it because we belong to this nation, to our families and friends, to the generations that have gone before us; we belong to a people who not only have a history but can make it, who are committed to a great cause, that of civilisation itself. It all seems a far cry from the banality of our current political discourse. At the end of the film Lord Halifax pays tribute to the power of words and Churchill’s mastery of them – he has mobilised the English language and sent it into war. In the age of Twitter and soundbites, our language has disintegrated and lost its creative, imaginative force; it is as dangerous in mobilising fear, hatred and prejudice now as it once was powerful in summoning virtue. In the film, we see a brief moment in which Churchill catches one of the speeches of Adolf Hitler. He quickly shuts the door on it, but we must not forget that Hitler, too, was a powerful orator who attempted to rouse the spirit of the German Volk, conjuring up the vision of a great nation and new world order.