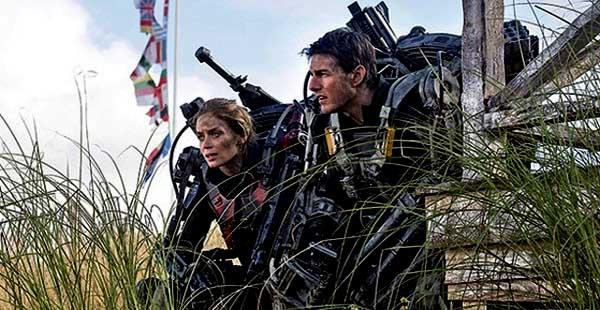 Some days feel as if they are never going to end.  It’s just back to the grindstone, once more through the paces, and somebody’s got a bad case of the Mondays.  Look at the bright side, though.  Most of us do not have to end each day being dissolved by acid, shot through the head or skewered by invading aliens.

Major William Cage (Tom Cruise) is not so lucky.  Ever since he was sprayed with the time-altering blood of a ‘Mimic’ at the D-Day equivalent of the alien wars, he can no longer die.  Rather, he does die, all the time, but snaps back again and again to relive the same day.  An insightful viewer called the film Groundhog Day meets Starship Troopers, and this says a lot.

Not everything, though.  There is none of Bill Murray’s teddy-bear tenderness here, and the insect-like aliens are served up with a brain-bending twist.  It is they who control time and, whether or not the logic is tighter than can be deduced from a single viewing, the implication is clear.  Like the hero in a video game stuck at some impassable boss but packing plenty of extra lives, Cage will have a couple of hundred goes at customising his armature, memorising the enemies’ formations and perfecting an exact sequence of rolls, sidesteps and mad dashes away from enemy fire.

If it all sounds a little tiresome, for Cage it clearly is.  But the main triumph of the film is that it conveys the fact of the tedium without the feeling.  The scenes are selected carefully to keep things moving, with even a welcome dash or two of playful tongue-in-cheek with the film’s high-concept motif.

Yet overall the tone is earnest, even teetering on the brink of dire.  Hollywood-standard images of teeth-gnashing, soldierly death in the face of double machine guns blazing do, however, get partnered with innovative, even at times dazzling CGI action art.  Cage’s promised romance with Special Forces soldier Rita Vrataski (Emily Blunt), a one-time time controller herself, never quite lifts off the ground, annoyingly, but perhaps this is fair enough:  it is already difficult for two working professionals to meet and get serious in this world without one of them getting repeatedly tossed into a timeloop.  And if we aren’t exactly sure how it all fits together at the end, the producers have done their best to assure us we should feel good about it.

On a positive front, the film prompts some reflections on the nature of repetition and eternity.  If the everlasting is anything like this, a Viking’s dream of pitched battle by day (perhaps against a host of fallen angels?) and mead hall happiness by night (perhaps with a host of Emily Blunts?), couldn’t it still maybe, eventually, grow a little dull?

Yes, probably.  Especially if perfection in life is conceived principally in terms of tasks to get finished, skills to master and even ecstasies to achieve.  I do not have the luxury to look around at anything in this world and realistically imagine it satisfying for endless ages:  even exciting jobs grow routine; leisure eventually bores; and pleasure, through an inscrutable cosmic paradox, gradually flattens out the more insistently I seek it.  Happiness, as they say, is always indirect.

Herein lies the secret, it seems to me, of an eternity devoid of tedium.  When, as gradually happens for Major William Cage, my principle aim shifts away from simply procuring pleasure or preventing pain; when I remember what I am willing to die for or, more challenging sometimes, willing to live for again and again each day; when I recall the secrets of self-forgetting, generosity and service – it is then that joy can slip in unannounced and each day feel surprisingly new.

The best take away from Edge of Tomorrow might be this:  eternity may well be a long routine and it may well begin today.  Whether it is pushing through another case of the Mondays, treading back through the paces, or keeping one’s nose to the grindstone, it may be precisely this kind of repetitious self-sacrifice that we have to look forward to forever.  Which may sound pretty tiresome, until we remember the unseen soul of all liturgy.