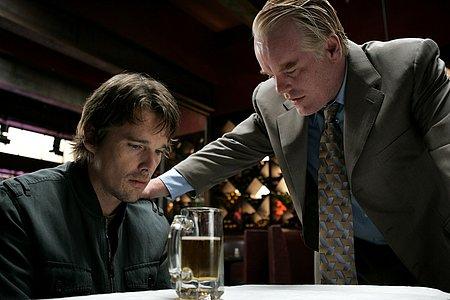 
Under what
circumstances does crime pay? Well, perhaps if it's a robbery that leaves no
physically harmed victims, and one that the insurance will cover, then maybe in
that case it could possibly pay!? In the film Before The Devil Knows You're
Dead, this is the view expressed by Andy Hanson (Philip Seymour Hoffman) as
he lays out his master plan to rob a jewellery store to his younger brother
Hank (Ethan Hawke), who he has always managed to manipulate. The saying "you
should never send a boy to do a man's job" comes to mind as everything goes
wrong and they find themselves up the proverbial creek without a paddle and the
reality that crime does not pay unfolds before them.

Living in Westchester, Manhattan, both brothers are in
desperate need of cash. Andy has swindled some money from the company he works
for to support his drug habit and his cheating unemployed wife (Marisa Tomei).
Hank is behind with his child support payments, about which his ex never fails
to remind him. Despite at first being against the idea, Hank grows to like it
and once again finds himself giving in to the pressures of his elder brother.

The
director (Sidney Lumet) uses a Memento-like structure for this film,
showing us scenes through the eyes of one character then switching to the eyes
of another. Everything falls in to place as the scenes compliment each other
and answer previously unanswered questions. Some of the techniques used, in
particular flashing from scene to scene, add to the suspense.

Before The Devil Knows You're Dead is a film about
pride and lack of trust within a family. Both brothers are middle class but
barely holding on by their fingernails. Andy takes advantage of his younger
brother Hank, who for his part, although at times he is seen as the one with
more compassion, still has an affair with Andy's wife. And their father Hanson
(Albert Finney) pursues justice, but on his own, keeping information from his
sons, because of his mistrust and suspicion of them both. As for the supposedly victimless robbery,
ultimately everyone becomes a victim.

I think of
the male image on screen. Before the world became more aware of feminism, women
in films were commonly portrayed as house carers, passive objects and objects
of desire while the man was portrayed as lord, master and hero. This continues
today, but to a lesser extent, as films like Kill Bill and Pan's Labyrinth
put females in the role of the hero. However, that pride continues in males,
the same pride we see in the Hanson Brothers. As for Hank, one wonders if men
are really lords, as he allows himself to be manipulated by everyone. Is this
manipulation a sign that perhaps not all men can think for themselves?

I think all of us at one time or another allowed ourselves
to be influenced by others. I think of the country mouse giving in to the
temptations of city life; I think of Prometheus' actions being influenced out
of pity for mortal men; I think of Samson and Delilah, of Peter's interest in
self-preservation as he denied knowledge of Jesus. Like Hank, all these people
allowed themselves to be influenced by external sources. With Hank, it is a
gentle, child-like trust in his bullying elder brother. Perhaps Hank's finding
good in all things, can be seen as a glimmer of hope in a world where trust is
scarce and where often it is those who are closest to us we ought to be more

Our Ecumenical Hopes: Where Are They Now?

Transfigured by justice
Daniel Berrigan SJ: Going back to the poetry
The Book of Revelation: Six homilies for Easter
Reflections on the Feast of the Ascension
Our freedom and God’s praise and glory