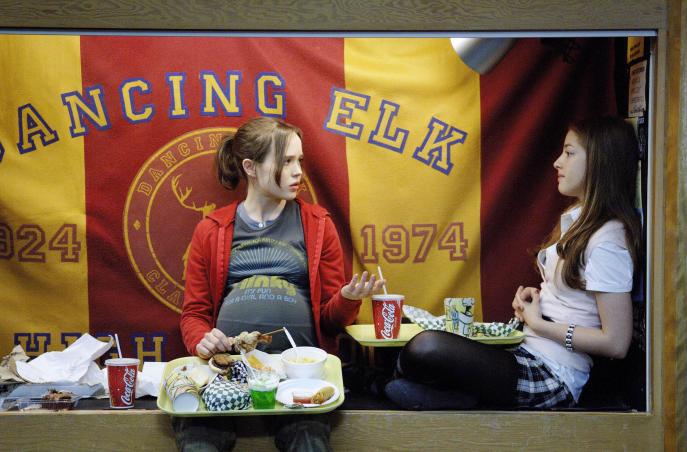 
Fingernails. Near the start of the movie the eponymous Juno visits an abortion clinic. Outside she meets Su-Chin, an anti-abortion protester and school friend, who tells her two things: “All babies want to get borned”[sic] and “It has fingernails”. Juno receives this second fact as a fascinating piece of trivia and continues on her way. Later Juno becomes aware that the clinic waiting room is full of fingernails. They’re scratching and drumming, being sculpted and decorated and when the still-pregnant Juno leaves, a delighted Su-Chin shouts after her, “God appreciates your miracle!”

This sequence just about sums up Juno. This story about an unplanned teenage pregnancy is very funny, very subtle and thankfully avoids the usual tragedy and hysteria to find its motivations in undeniable human detail instead of abstract political viewpoints.

Juno herself is the best thing about this movie. She’s a pint-sized sixteen year-old, precocious, smart and fiercely witty, who decides to give her baby to “someone who totally needs it, like a woman with a bum ovary or a couple of nice lesbo’s.” Played by newcomer Ellen Page, her performance is infallible as she delivers line after hilariously line of joyfully inventive dialogue. But beneath the supposedly glib giggles Juno’s thoughtful actions betray her constant schtick, giving the movie a pathos and sophistication that elevates it above its ‘teen movie’ label.

The adopting couple turns out to be Mark and Vanessa Loring, two thirty-something yuppies whose lives would be perfect if only they had a child. However, the would-be father played by Jason Bateman, who’s best known for starring in the fantastic sitcom ‘Arrested Development’, still harbours dreams of rock stardom and isn’t ready for a baby. Arrested development indeed.

Michael Cera (who also starred in ‘Arrested Development’ as Jason Bateman’s son!) plays Bleeker, Juno’s baby daddy. He’s a lovely fella. Gentle, unassuming and decent enough not to ask, “Are you sure it’s mine?” when told of the pregnancy.

And that’s what great about Juno, it naturally avoids all the clichés you might expect. The inevitable threat to the adoption isn’t from the whims of the teenage Juno, but from the immaturity of Mark. When Juno tells her family she’s pregnant their first reaction is to get her on pre-natal vitamins. Such a response might seem far-fetched but because the parents, like every other character, are rendered as smart and loving, we can believe they’d have such trust in their daughter.

Stylistically, this is yet another film that owes a lot to Wes Anderson. It’s quirky, has childish animation and is filled it with dry humour, pastel colours and a twee soundtrack. At a glance this could easily be mistaken for a mobile phone advert. Nonetheless, it’s a comforting setting and surprisingly very touching.

Juno belongs to a world where the nuclear family no longer exists in isolation. After several generations of divorce and stepfamilies a new equilibrium is coming through where the trauma of a family split isn’t necessarily permanently damaging. Children no longer need to feel ashamed of their parents’ break ups because chances are they’ll have friends in the same position. And although all this divorce could seem very bleak, Juno has a refreshingly positive take on it: sharing the same blood isn’t necessary for truly loving family relationships.

Take Bren, for example. When a judgemental ultra-sound technician presumes young Juno would make a bad mother, Bren immediately jumps to her defence with all the gusto and instinct of any birth mother. This film knows that bonds go beyond blood. If you need any further proof look no further than Bren’s job. What with fingernails being an unlikely symbol of life and motherhood, it’s certainly no accident that she’s a nail technician.

So, in yet another cliché dodging moment, Juno hits upon a deeper truth that family is important but traditional entry requirements no longer need apply. The idea of adoption isn’t just a blessing for Vanessa to know the ultimate happiness of being a mother, but is also a chance for Juno to complete her childhood. It’s this inherent optimism that makes Juno such a special film and it will undoubtedly become an instant classic.

The Unjust Judge: how the media wrongly convicted David Laws

Where the hell is God?