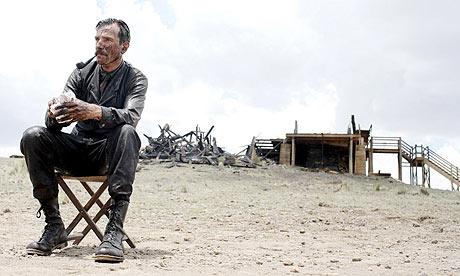 
There is a theatrical quality about this film:  at key moments, the camera pulls right back into a medium long shot—as if out of the language of film—to make a proscenium out of the cinema screen.  On this newly re-created stage, Daniel Day Lewis sprawls, ranges and dominates as Daniel Plainview, strangely incomprehensible oil man of California.  It is, as he says of something quite different in the film, ‘one hell of a show’.

There is some deliberate referencing of that other magnate, Citizen Kane:  like Kane, Plainview ends the film lonely, robbed of love and surrounded by the vulgar excesses of rich men.  (A particularly well-chosen—if distracting—detail is the 1920s indoor ten-pin bowling alley:  it has two well-polished lanes, wooden cradles for picking up the pins, even a conveyor belt for returning the bowling balls, with not an electric motor in sight).  And the films mirror each other, as much as the central characters.  Like Kane, at the centre of There Will be Blood is the driving pursuit of power, and like Kane, the film is a collision of a dry realism and teasing, dissatisfying enigma.

I suppose one enigma is the plot:  there’s a slight tendency to ask yourself, what actually is this film about?  Well, it seems to be about the tension between God and Mammon.  And it seems to use oil as a metaphor for something.  And it looks at fathers’ relationships with sons.  And it scrapes away at men’s motivations showing the venality that so often lies beneath apparent idealism.

But in general, there seems to be a deliberate evasion of a clear argument.  Even the oil (which could so easily be presented as a metaphor for Hell), is just there, doing what oil does.  The central relationship, between Plainview and his adopted son HW, is similarly full of confusion and ambiguity.

When accident kills the boy’s father, Plainview adopts his prospecting partner’s orphaned child.  Though he finally claims—cynically—that this was only to use the boy for leverage in cutting deals, the relationship we see on screen is significantly more complex.  Plainview’s final actions are indeed in plain view, but through the rest of the film we just don’t know what this man thinks of the boy:  is it mild affection, tolerance, exploitation, genuine love?  The gestures of love, are they simply gestures, insincere movements of the hand, or do they show something real?

And so, (in the third film this month) masculinity is thrown into question, this time in the shape of paternal love:  how well do sons know they are loved by their powerful fathers, and how can they show their love back if not in instinctive mimicry?  How much are sons made by men they will never really understand?  Who can tidily explain when and why love goes sour?

Though the last moments are dramatically clear—the chain of events cannot easily be explained: everything is compromised, no motive is transparent.  Action always exists in the oily mess of slippery, evasive human conscience.

There Will Be Blood theatrical trailer

Thinking about the Council