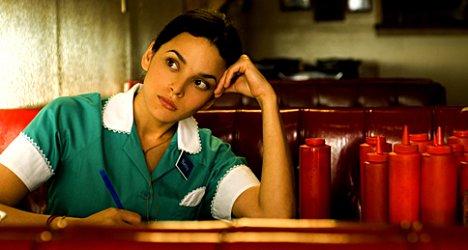 
In the beginning, My Blueberry Nights sees New York café-owner Jeremy befriend the recently heart-broken Elizabeth. She comes in after hours and comforts herself with blueberry pie while he delivers unbelievably trite philosophies on love and life. My Blubbery Nights, more like! That might seem like a cynical reaction but this is the age of Gillian McKeith and Richard Dawkins, and we should tolerate neither unhealthy comfort eating nor illogical, emotionally-driven theories. Seriously though, this film is unworthy of sympathy. Take the exchange that gives us the title, for example. As Jeremy goes through the nightly ritual of binning the café’s eternally uneaten blueberry pie Elizabeth asks, "So what's wrong with the blueberry pie?" Jeremy replies, "There's nothing wrong with the blueberry pie, just people make other choices. You can't blame the blueberry pie, it's just... no one wants it". "Wait," says Elizabeth, "I want a piece!" Of course she does. Clearly, this laboured metaphor is best used to illustrate the film's simple-mindedness rather than the inherent tragedy surrounding love and desire.

Perhaps the obtuseness of the film comes from Hong-Kong director Wong Kar-wai. It's his first English-language film and though My Blueberry Nights is similar in theme and tone to his previous, highly acclaimed films (In the Mood for Love and 2046), it certainly lacks the nuance of those offerings. But Johnny Foreigner doesn't get off the hook that easily. When fellow Hong-Kong director John Woo entered the Anglosphere, he gave us action-classic Face-Off. So what else can we blame? Well not Norah Jones. Surprisingly, casting the middle-of-the road soul singer as the lead was a good call. Despite being an amateur she doesn't put a foot wrong and seems very comfortable in the performance. But most of all, she's unrecognisable and passive. These turn out to be necessary qualities as Elizabeth doesn't spend the whole film eating pie. Instead she goes on a road trip across America, working in bars and cafés. Each new place offers up a new drama and gives the film its episodic structure.

In Memphis, Elizabeth meets an alcoholic cop who's been cuckolded by his much younger wife. And this is where being unrecognisable and passive comes into play. The cop is played by the brilliant but mostly unknown character actor David Strathairn and because he doesn't bring any expectations to the role, he manages to make the pathetic, deluded and abusive policeman into the film's only sympathetic character. Likewise, because Norah Jones has no baggage, she's successful in playing a passive role through which the other characters can open up to and confide in. As for the remaining three of the film's five main roles, they're played by big name stars and are all quite terrible. Jude Law plays café owner Jeremy with a distracting Mancunian accent. Rachel Weisz sounds much better as the cop's wife but the tortured soliloquies of this Memphis belle come across as little more than actorly set pieces. And finally, Natalie Portman plays Leslie, a professional poker player who's down on her luck. Her babyface isn't designed to carry the woes of a gambling addict and the decision to keep her perfect skin and hair means Portman comes across like just another movie star.

This glossy sheen is a real problem. All these settings should be quite glum. The bars and the gambling dens are full of characters without hope, ambition and opportunity but there's a concerted effort to depict these places with romance. We see nothing of New York outside of the café except for an elevated subway train flickering across an overhead bridge. The train has nothing to do with the plot, it's just an unimaginative trick to evoke the strangeness of the city. A lot of the scenes in the café are shot from the outside through the window. The only discernable reason is to fill the screen with colour as the character's faces are encroached upon by the hand-painted adverts on the shop's glass. The towns that Elizabeth travel through are barely seen, anonymous save for the blurry neon signs and rain-soaked main streets. What we've got here is a tourist's view of America, but worse than that we also have a tourist's view of romance and relationships.

Reform, Morality and the Coalition