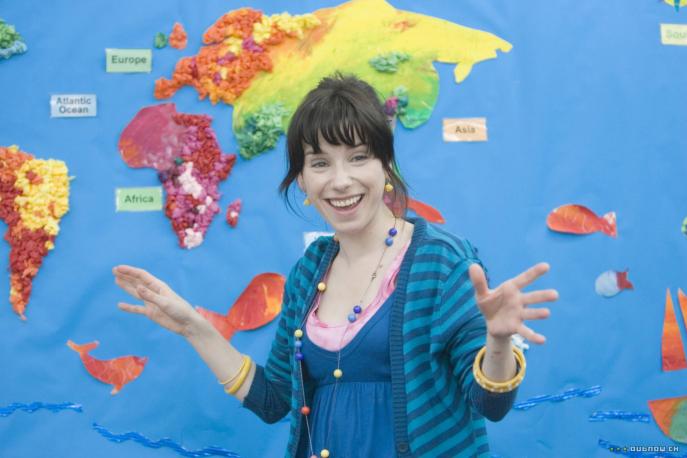 
Mike Leigh must make his films by magic.  There’s no script.  If I understand the process, it’s as if he gets his actors to spend months blowing dramatic soap-bubbles; then he petrifies them (the bubbles, not the actors); then he constructs an entirely solid pyramid.  Or perhaps a Sphinx?

But a film is not to be judged by the genius of its maker – and he surely is a genius, and one of extreme artistic integrity and skill.

Every actor here (I liked especially the Flamenco teacher) rings true to life: even the pathetic little bully in the school, the friends and, overwhelmingly the driving instructor played by Eddie Marsan.   And, supremely, the amazing Sally Hawkins – beautiful, of course (and we see a lot of her, in every sense, and not just her teeth in the omnipresent grin) – the whole film revolves around her and her perception of the world.

An unfailingly sunny disposition usually puts me into a bad mood, and for the first fifteen minutes I settled into a sullen dislike of Poppy, Sally Hawkins’s character.  But she faces tragic situations and her humour is never cruel.  She is brave and generous as well as fun.

So the film is amusing – not hilarious – a lot of quiet semi-chuckles.  Mike Leigh isn’t Jacques Tati.  But it’s sad too; and sad is the way I walked out, and the way I think Mike Leigh wanted me to leave.

The sunshine-laden Poppy throws light on unhappy lives, sad neighbourhoods and constricted hearts.  She’s sweet, happy, generous, kind, and brave and funny.  But she lives in Britain today, and while she can strike humour out of wretchedness, she highlights it.

A further sadness: the future won’t be so good.  She and Zoe – her flat-mate, excellently played by Alexis Zegerman – have a sexual relationship (this is alluded to in two sentence, and never obtrudes).  What will happen to Zoe when Poppy takes up with her new boyfriend?  And how long will that last, given the way it starts?  And will either expect or want it to last?  And if Poppy gets her baby, what will its world be like?

Look.  What can Poppy really do with her beauty and her kindness and her sunny disposition?  She can make things a little gentler for the unfortunates she meets, but can she really ever be happy herself?  What does happiness mean for Poppy?

If she doesn’t know what a human being is for (and she doesn’t even know what sex is for, if she can drift into it so casually) can she ever tell what successful living is?  If she doesn’t recognise a Designer can she ever see a plan?  If only she knew about a Saviour and a Cross she could perhaps show sense for people – not by putting trolley wheels under their crosses, or even taking their crosses away, but by showing them why they carry them.

No one could ever have cured her driving instructor, I suppose, or the tramp.  But if she had known, she could have made some sense for herself and even for them, helping them recognise their need of a Saviour, the dignity of their pathetic scars, and the possibility of loving God in pain and failure.  For a Christian, Mike Leigh’s acute vision illustrates this.

The Church and the Dialogue with Science