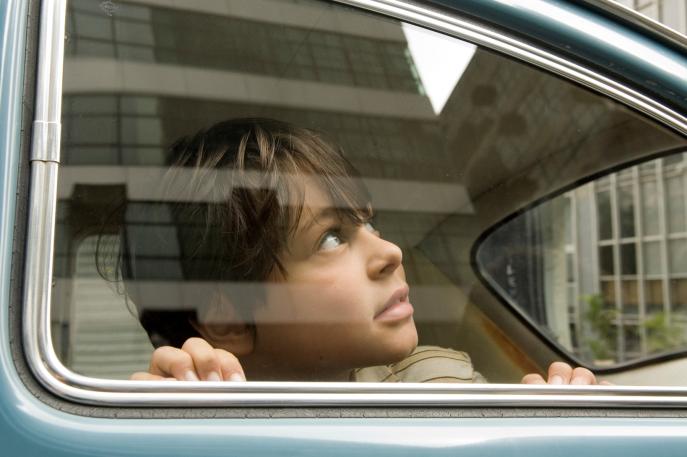 
1970 remains a memorable and celebrated year for Brazilians.  It is the year in which their football team, led by Pele, triumphed yet again in the World Cup.  In the film The Year My Parents Went on Vacation, 1970 is doubly memorable for Mauro, played by Michel Joelsas.  In 1970, twelve-year old Mauro is hastily left on his grandfather’s doorstep in the Bom Retiro neighbourhood of Sao Paulo.  The problem is that his grandfather has recently died.  With his parents having fled for political reasons, and with no family in the area, Mauro becomes the responsibility of his grandfather’s elderly neighbour, Schlomo (Germano Haiut).  The resulting story explores the relationship between the two, as well as Mauro’s integration into his new neighbourhood.

Mauro is hardly at ease in his new surroundings.  Aside from being among complete strangers, he is exposed to a new form of religiosity, for Schlomo is an Orthodox Jew.  In addition to praying in the privacy of his home, he is a member of a local Synagogue and takes part in communal prayer.  He also seeks counsel from his religious community.  When he brings up the situation that was initiated by the unexpected arrival of Mauro, the rabbi makes it clear that it is Schlomo’s obligation to care for the boy.  He likens it to Moses being sent by his mother down the river Nile and finding safety with Pharaoh’s daughter.

Hanna, played by Daniela Piepszyk, is the first to befriend the newly arrived Mauro.  She is a dark haired and bug-eyed girl with a fierce entrepreneurial spirit.  Among her businesses is sneaking curious, prepubescent boys behind her mother’s dress shop, where their hearts pound as they watch women try on clothing.  While Mauro is one of her clients, her disapproval is clear.  She wants Mauro to look at her and her alone.  Unfortunately for Hanna, Mauro has no such intentions.  He has a liking for older, more developed women. Aside from that, his chief distraction is football and the 1970 World Cup.

When Brazil claims the title by defeating the Italians, the whole of Brazil erupts with jubilation.  In the context of the film, the moment is anti-climactic, for Mauro’s parents have yet to return.  It is quite a surprise when Mauro returns to his grandfather’s apartment to find his weary and unaccompanied mother.  At the beginning of The Year My Parents Went on Vacation it was said that his father always arrived late.  This line is repeated at the conclusion of the film and one is left to wonder what has caused the delay, presumably death.

The Year My Parents Went on Vacation does a fine job of leading the viewer along Mauro’s path of discovery.  Mauro is a patient waiter.  In this case, waiting is far from boring.  Both Mauro and the viewer know what is being waited for, nothing less than the reunification of a family that has been split apart.  And this, I think, is the most valuable lesson that the film brings to the fore.  The act of waiting need not be stagnant, but can be dynamic.  During a period of waiting there is much to be discovered.  New relationships begin, self-understanding continues to develop, and hopes escalate.  The object of our hope may be achieved, but perhaps only partially, and often times not as we had previously anticipated.  Such is our incapacity to fully control the course of future events.

To be sure, little Mauro offers an admirable example.  His time of waiting for his parents to return is one of dynamism.  His initial period of disorientation is short lived and with the help of others, he ventures out into the world to see what it has to offer.  As is usually the case, that which is on offer is both good and bad.  Inthis film, the fact of political oppression is matched by the goodness of the welcoming religious community, and in particular, Schlomo.

In the end, I was left to appreciate the importance of community and the demands that it makes upon religious believers to widen their tents for the sake of caring for those in need.  While the command to love thy neighbour is integral to the Gospel, it is hardly exclusive to it.  The Year My Parents Went on Vacation reminds us of this, and in doing so, suggests that there is much to be learned from our religiously different neighbours.